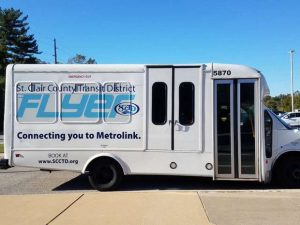 Similar to ride-hailing services, SCCTD Microbus riders will be able to request a ride to or from a MetroLink Station from anywhere within the city limits of East St. Louis. (Photo courtesy of St. Clair County Transit District)

Similar to ride-hailing services, riders will be able to request a ride to or from a MetroLink Station from anywhere within the city limits of East St. Louis.

Preliminary study results are being released this week online.  SCCTD riders, beginning this week, will be able to provide comment on those plans through a new online survey.

Known as SCCTD Flyer, the new app-based, curb-to-transit micro-transit service will provide on-demand mini-bus service to and from existing transit stations, in areas of East St. Louis that are not within walking distance of transit.

“The SCCTD Flyer will be a great option when inclement weather, darkness or general safety is of concern for customers trying to walk longer distances to access the MetroLink or MetroBus,” said Lonnie Mosely, member of the St. Clair County Transit District Board of Trustees.

“Other major cities have implemented similar programs to meet community demands that don’t necessitate larger bus vehicles,” Mosely continued.  “This pilot program will help SCCTD determine whether this type of service is a better fit for smaller transit ridership markets, while helping to boost ridership on the overall transit system.”

SCCTD Flyers will provide door-to-transit and transit-to-door services to those heading to and from homes, employers and schools in East St. Louis, Mosley notes.

The one-way fare for the new micro-transit service will be $3. That includes transfer to or from MetroLink or MetroBus.

While the service will initially be offered only within the boundaries of the City of East St. Louis boundaries, the pilot program could be expanded in the future to other markets depending on rider response, SCCTD officials say.

The SCCTD Flyer service represents a partnership with TransLoc, a subsidiary of Ford Motor Company, and Southwestern Illinois College’s (SWIC) Alternative Transport Services (ATS) program. TransLoc has developed a transportation app which is already widely used by flexible on-demand and traditional fixed route transportation systems, in both the public and private sectors.

Riders will be able to request SCCTD Flyer service ride through the TransLoc app or by calling Alternative Transportation Services reservations at 618-800-6884.

App users will be able to receive an estimated pick-up time, track rides in real-time, be alerted when a ride is about to arrive, and pay for the service.

With accessibility being a critical component to the program, customers without smartphones will be able to request same-day rides by calling ATS, making a reservation and arranging advanced payment.

The service will be available Monday thru Friday from 7 a.m. to 7 p.m.

No cash fares will be accepted.

The on-demand micro-transit trial is part of Transit Vision 2020 : an in-depth, nine-month review of SCCTD’s existing 18 fixed bus routes — as well as an analysis of possible new transit services.

The study being conducted by Transportation Management Design, Inc., of Carlsbad, CA., under a contract approved by the SCCTD Board at its April meeting, a contract with (TMD). It is to be completed in February 2020.

An initial phase for the study, to identify SCCTD riders and services, was conduct from May to August.  It included a review existing financial conditions to understand revenue sources and drivers in costs.

A second phase, centered around development of guiding principles and a service development framework, began in August 2019.  That involves identifying key issue including the current and expected future roles of transit in local and regional mobility and outlining transit’s link with the region’s overall development, according to the SCCTD website.

The finalizing SCCTD Transit Vision 2020 Plan in February is to include:

As part of the study, the SCCTD is conducting an extensive public engagement effort including “pop-up” events at transit stations, an online survey, stakeholder meetings, and “open house” meetings, according to the district’s website.

Preliminary results of the study were officially released during an open house Oct. 21 at Cahokia High School.

The preliminary results, as well as the online survey for public comment, can now be found on the SCCTD Transit Vision 2020 website (http://scctd.org/info-for-riders/transit-vision-2020).

SCCTD Flyers will provide door-to-transit and transit-to-door services to those heading to and from homes, employers and schools in East St. Louis, Mosley notes.

The one-way fare for the new micro-transit service will be $3. That includes transfer to or from MetroLink or MetroBus.