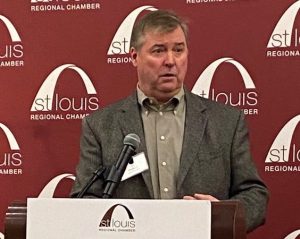 The first year of the push for more regional unity across the  Metro East area has been a success, according to the St. Louis Regional Chamber (SLRC).

The SLRC, which represents businesses across a 15-county area in Missouri and Illinois, promised greater emphasis on Metro East last year in its annual State of St. Louis  report.

“… it can be easy to overlook the impact Illinois has on our region,” Chamber officials noted in their report last year.

“However, the Chamber recognizes that pitfall and plans to avoid making that mistake in the future. Moving forward the Chamber will be increasingly receptive to Illinois’ concerns and encourages the governments on both sides of the river to work together towards building one of the nation’s top economic regions,” the document continued.

The SLRC represents businesses across a 15-county area in Missouri and Illinois — including Bond, Clinton Calhoun, Jersey, Macoupin, Madison, Monroe, and St. Clair, counties in the Prairie State.

A new set of SLRC legislative and policy priorities for Illinois is due over the coming weeks, according to Chamber staff.

However, an initial round of Illinois-specific legislative objectives recently adopted by the Chamber last resulted in some successes, SLRC staff notes.

Enacted last year, Rebuild Illinois authorizes $13 to 15 billion in spending over the next 10 years for maintenance of state roads and bridges; with an additional $30 billion for upgrades and improvements to aviation, public transit, freight and passenger rail and new highways.

In addition to major regional projects like the renovation of I-255, the capital improvements program allocates a total of some $254,469,000 for projects in communities in Madison, Monroe, and St. Clair counties. 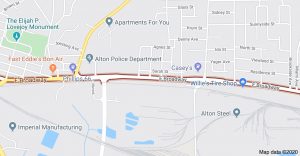 Included in the Rebuild Illinois program is  $592,000 for expansion of Broadway Street in Alton. (courtesy Mapquest)

Those local projects include a $592,000 expansion of Broadway Street in Alton, a new $105.3 million for health-sciences building at Southern Illinois University Edwardsville (SIUE), and the $96 million expansion of MetroLink to MidAmerica Airport and Scott Air Force Base.

Not everything on the Chamber’s wish list for Illinois came to fruition last year, SLRC staff admits.

have been instrumental in bringing new development to the Collinsville, O’Fallon and Pontoon Beach areas. 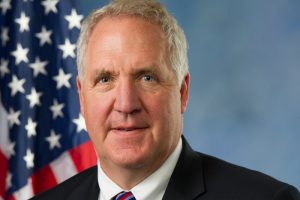 Illinois Senate President John Cullerton (D-Chicago), who is retiring from the legislature this month, was awarded the chamber’s Champion Award for his work in enacting the Illinois Capital Bill.

The dinner is held annually to recognize lawmaker support for economic development in the St. Louis region. Madison County Employment and Training is named finalist in the St. Louis Regional Chamber of Commerce 2020 Arcus Awards.

The St. Louis Chamber, earlier this month, announced Madison County’s Employment and Training program is a finalist in the chamber’s 2020 Arcus Awards competition.

Winners in seven categories will be named during the seventh Arcus Awards Ceremony on Feb. 27 in St. Louis.