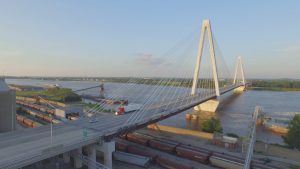 The initiative is also proposing new interstate highway improvement in Missouri to make the Stan Musial Veterans Memorial Bridge more useful for those traversing between St. Louis and Metro East.

A function of the Bi-State Development Agency, the St. Louis Regional Freightway is a public-private partnership established to develop the St. Louis area as national freight transportation hub — with large-scale capacity to transfer shipments among waterway, rail and over-the-road carriers.

The EWGCG is the federally-recognized planning agency for the eight-county St. Louis region and is charged with recommending local infrastructure projects and other initiatives for federal funding.

The draft submitted to the regional planning body last month is intended to update a prioritized infrastructure improvement proposal developed by the St. Louis Freightway shortly after it was established in 2016. 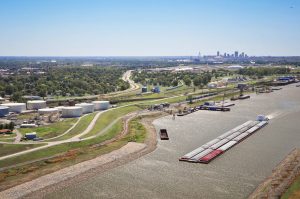 America’s Central Port in Granite City is receiving a $700,000 federal grant for rail and roadway improvements including upgrading of the railroad track to the port’s harbor and its four main terminals. (Photo courtesy of St. Louis Regional Freightway)

Freightway officials hope the EWGCG will give weight to its infrastructure proposals when considering applications for federal grants.

No funding sources have been identified for many of the projects on the list.

Eleven of the St. Louis Freightway’s 20 proposed infrastructure projects would be in Metro East.

To provide better access for freight shipment through MidAmerica Airport —Scott Air Force Base’s civilian annex — the Freightway is proposing improvements along I-64 from Greenmount Road to Illinois Route 158 (Air Mobility Drive) in O’Fallon and the expansion of Illinois Route 158 from Route 161 to Route 177.

The Freightway is also proposing construction of two-mile railroad spur from the Norfolk Southern mainline at the southern edge of the MidAmerica grounds to the eastern side of the airport.

A proposed improvement program at America’s Central Port calls for upgrading of railroad track to the port’s Granite City Harbor and its four main terminals, including the U.S. Steel Granite City Works.

The plan also calls for revitalization of the port’s Granite City Harbor General Cargo Dock and a new port entrance at Illinois Route 3.

The Freightway would also like to see funding for a pair of feasibility studies at the Kaskaskia Port District: one on the construction of a new bulk fuel pipeline between the port’s new Fayetteville Terminal and Scott AFB; the other on updating of the outbound conveyor at the ports existing terminal.

The $200 million replacement of the 127-year-old Merchants Rail Bridge, spanning the Mississippi between St. Louis and Venice, Ill., could still begin this year and be completed as early as 2021, if federal funding is secured, Freightway officials note.

The St. Louis Terminal Railroad Association, which owns the bridge, is seeking a $40 million federal grant and an $85 million federal loan to help cover replacement costs.

Illinois Route 3 currently runs along the Mississippi River from I-255 in Madison County to the McKinley Bridge approach, where it doglegs inland through Venice, Brooklyn and East St. Louis; then run again along the river from Sauget to Columbia.

Metro East leaders have long called for the rerouting of the highway so it continues uninterrupted along the river from end to end. That would entail construction of new riverside roadway from Venice to East St. Louis.

However, in its latest proposal, the Freightway calls for construction of new roadway only from River Park Drive in East St. Louis to Monsanto Avenue in Sauget — a step that would still open 200 acres of surrounding and to development, planners say.