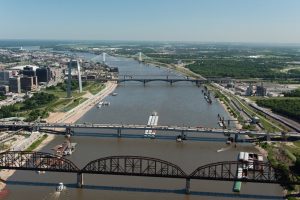 The St. Louis area’s inland port and terminal system is now the second busiest in the nation, according to new data released by the U.S. Army Corps of Engineers (USACE).

According to the USACE, St. Louis and Metro East ports handled 37.4 million tons of commodities during 2018; a 13.2 percent increase over the previous year.

That was just 1.1 million tons less than the nation’s largest inland river terminal district, the Port of Cincinnati and Northern Kentucky.

The increase in total tonnage was due in large part due to an uptick in the volume of commodities handled by area terminals — notably, corn, soybeans and unclassified oilseeds, the USACE data indicates.

However, crude oil handling through St. Louis area ports was also up significantly in 2018 as the United States became a net exporter of petroleum.

Iron ore tonnage through the ports more than doubled, likely tied to the resumption of operations at U.S. Steel’s facility in Granite City.

Several factors have been contributing to growth in St. Louis and Metro East port traffic over recent years, according to Ken Eriksen, a senior vice president with the international trade consultancy, IHS Markit:

There is only one set of locks between St. Louis and Asia, and that is the Panama Canal, Eriksen notes.

The planned closing of the Illinois River to freight this summer will likely affect commodity flows through St. Louis, according to spokespersons for the Multi Modal Enterprises division of the Bi-State Development Agency. 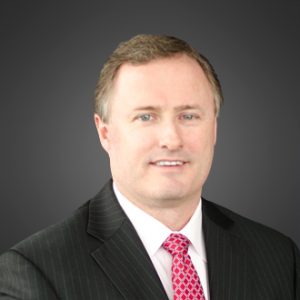 Over the longer run, development of the National Highway Freight Network (NHFN) and American Marine Highway (AMH) system —which will intersect in the St. Louis area — as well as growing transportation infrastructure spending in the region, will further increase freight tonnage through the area, Bi-State spokespersons say.

Those long-range factors, as well as the impact of flooding, will be top agenda items as leaders from Mississippi River communities meet in Washington D.C. next month to begin lobbying on a new federal Water Resource Development Act (WRDA).

WRDA is generally used in government circles to describe a series of laws enacted by Congress, beginning in 1974, to deal with various water resource issues including flood protection, commercial navigation, environmental protection, recreation river use, agricultural runoff and economic development.

The latest in 2016 was part of the larger Water Infrastructure Improvements for the Nation Act (WIIN Act), which addressed a wide range of concerns from dam safety and harbor development to drinking water standards.

New WRDA legislation is expected to begin taking shape in Congress this spring.

Resumption of operations at U.S. Steel’s facility in Granite City contributed to the increase in the iron ore tonnage moving through the local ports. (Photo courtesy of United States Steel)

Representing the interests of many riverside communities in the WRDA debate is the Mississippi River Cities and Towns Initiative (MRCTI), which will hold its annual Capitol Meeting, March 3-5 in Washington, D.C.

Grafton Mayor Rick Eberlin, a MRCTI board member, will preside over a Capitol Hill luncheon on the anticipated water resources bill.