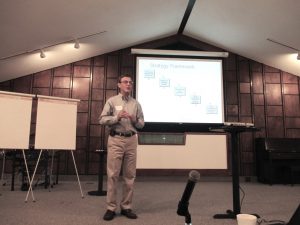 With Madison County widely cited as an epicenter of the nation’s opioid crisis, top U.S.  Department of Health and Human Services (HHS) officials descended on Edwardsville, Sept. 20, for a roundtable meeting on local action to fight the epidemic.

Central to both efforts: Expanding access to a range of treatment and service options through partnerships and interagency cooperation.

Under the grant program, states agencies, in cooperation with local communities, must formulate plans to ensure evidence-based, medication-assisted treatment is adequately available to individuals with opioid addictions.

The roundtable, at Edwardsville’s Addiction Treatment Strategies (ATS) clinic, was intended to promote local understanding of the resources offered by the federal government and determine if existing efforts to curb opioid abuse are working, according to 12th District U.S. Rep. Michael Bost (R-Murphysboro), who attended along with 13th District U.S. Rep. Rodney Davis (R-Taylorville).

ATS, an 11-year-old, private, outpatient clinic, offers six-month neurobiological addiction treatment programs, according to a staff member. Clinic director John Crum is hoping its medically-assisted but neuro-therapy-oriented approach to curbing substance abuse, as well as related or underlying problems, will see greater use as opioid treatment initiatives are expanded. 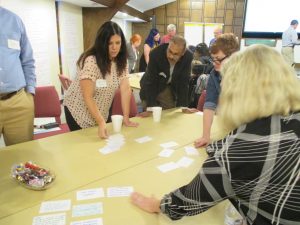 Gibbons in 2014 helped launch a countywide law enforcement campaign against hard drugs, after 22 county youths died from overdoses in a single year.

Also in attendance was Kari Karidis, the principle of the Collinsville School District’s Hollywood Heights Elementary School and producer of “The Heroin Project” – a 2015 documentary on the heroin epidemic in and around Madison County.

Madison County Community Development (MCCD) hope its new Madison County Connected (MCC) initiative can provide a unified and well-coordinated way to address not only drug abuse, but poverty, unemployment, an aging population, and myriad other issues, according to MCCD Administrator Trudy Bodenbach.

Launched during a special two-day workshop, Sept. 11-12 at Alton Community Christian Church, MCC is designed “to connect Madison County individuals and families with resources to achieve healthy goals, building on their assets and strengths,” according to its mission statement.

Like most parts of the nation, Madison County offers a range of social service and health programs for those in need of assistance, Bodenbach notes. However, as in most parts of the nations, administration of those services is seldom well-coordinated; making it difficult to ensure individuals receive all necessary services and making it difficult to track the effectiveness of social services or health programs, she says. 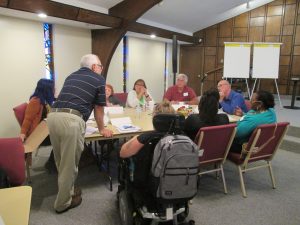 “A collaborative, countywide effort was long overdue and much needed in order to effectively serve our most vulnerable Madison County residents,” said Denise Ukena, assistant executive director of the Community Hope Center in Cottage Hills. Ukena and Lindsey Apple, associate pastor of Newsong Fellowship in Edwardsville, were elected co-leaders of the MCC effort, during the workshop.

Over the coming weeks, project teams, appointed during the workshop, are to finalize formal strategies on coordination of services and agencies, access-to-service issues, and marketing.

In particular, Bodenbach hopes to encourage participation in MCC by area churches “which in many cases may have people with needs coming through their doors but may not have the resources to help them.”

Follow-up meetings on the coordination, access, and marketing plans are to be held within the next month.

Initially established to administer federal community development block grants, the MCCD is now in charge of numerous services for low income individuals as well as economic development in the county.

For addition information on Madison County Connected, contact the MCCD at 618-692-8940.