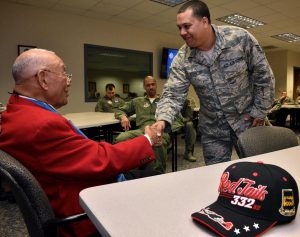 Not every day do you get to meet a true American hero, let alone one that is a WWII fighter pilot and happens to be a Tuskegee Airman.

For the men and women of the 932nd Airlift Wing at Scott Air Force Base, meeting retired Lt. Col. Robert (Bob) Friend was a rare opportunity to meet such a hero.

Friend was the honored guest for several speaking events from May 6 – 9, at Scott Air Force Base.

After earning his private pilot’s license in 1940 through the Civilian Pilot Training program at the age of 20, Friend then applied to the U.S. Army as a cadet.  He was accepted, and in 1942, after several weeks of training, he was commissioned as a second lieutenant and fighter pilot. Colonel Friend flew 142 missions in the P-51 Mustang as well as having flown the P-47 while performing heavy bomber escort detail.  He retired from the Air Force in 1972.  Friend then went on to earn a degree in astrophysics and continues to work to this day as a consultant with an aerospace company in Los Angeles.

“It was a great honor meeting Colonel Friend and sharing my story of how I obtained my private pilot’s license through the Tuskegee Next program,” said Sanders.  “Meeting him has inspired me to accomplish the goal of becoming a military pilot one day.”

The Tuskegee Next program seeks to enhance the lives of at-risk youth through aviation education and career path opportunities. Creating the next generation of Tuskegee Airmen.

Sanders shared that he wanted to become a pilot after his first flight to Disney World in 2008. He lived near Midway Airport in Chicago and saw planes flying overhead.

“While talking to Colonel Friend, he told me I was on the right path and he knew I was going to accomplish my goals,” said Sanders. “He told me to get it done and I told him I will keep the faith and get it done.”

Friend shared stories and posed for a group photo.  He had a sense of honor in his words as he spoke about fighting for America and how integration wasn’t done correctly during his time with the U.S. Army Air Corp. 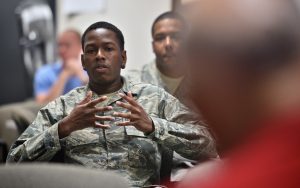 “Tuskegee is not just black, but where all non-whites went to learn to fly,” said Friend, about the Tuskegee Airman training grounds.  “Asians, Indians, anyone that was not white went to Tuskegee.”

“I primarily helped to make components that go into a larger system,” said Friend.

He then added that being a fighter pilot was similar to what he does to support NASA.

“Pilot is just part of the system,” Friend said.  “You also have the mechanics, navigators, radio operators, instructors and all the support staff working together.”

Friend was asked if he was scared when he was sent off to fight in WWII.  He replied with “Fly low and slow” was what his grandmother told him before he left.  He also said he was honored to serve his country, as an American.

During their conversation, Friend talked about racism in his era and shared thoughts on how hyphenated names, like African-American, are used today. Friend said he doesn’t like the use of them.

“He, Friend, said something that really made me think,” said Brown.  “He said that when he was serving, he was serving as an American, not a hyphenated American.  I found that profound.”

Brown added that the visit with Friend really made an impact and reminded him of conversations with his grandfather.  He said it was like visiting a museum and learning about a piece of history.

“I felt a sense of honor just to be in the room there, sitting with him. I was thinking, this guy right here paved the way for me to be in the position that I’m in today.”

Brown recalled the story by Senior Airman Sanders and how it inspired him to hear about the young Airman and the Tuskegee Next program.

“That was a big inspiration for me,” said Brown. “It reminded me that you can always make a difference in someone else’s life.”

Colonel Friend said he enjoyed his visit at the 932nd Airlift Wing as he looked out at the audience of Airmen during one of the presentations.

“Gonna be in good hands,” said Friend, about the future of the Air Force.