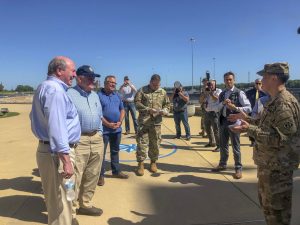 Maj. Gen. Mark Toy, Mississippi Valley Division Commander (on the far right) addresses R.D. James, assistant secretary of the Army for Civil Works, and Secretary of Agriculture Sonny Perdue during the rollout of the U.S. Department of Agriculture’s Importance of the Inland Waterways report, at Melvin Price Locks and Dam 26 in Alton. (Photo caption of U.S. Army Corps of Engineers)

Much  of the Upper Mississippi River in Illinois, north of Alton, will effectively be closed to commercial traffic for multiple, extended periods over the next 10 years, to accommodate a $6.3 billion infrastructure improvement program, federal officials have announced.

U.S. Secretary of Agriculture Sonny Perdue and Assistant Secretary of the Army for Civil Works Rickey Dale “R.D.” James, outlined the effort and its implications on Midwestern commerce and agriculture, during a Aug. 28 briefing at Melvin Price Locks and Dam 26 in Alton.

The infrastructure improvement effort involves major renovations at most of the 27 lock-and-dam complexes along the Upper Mississippi; however, it also calls for extensive dredging along the Lower Mississippi at New Orleans.

A complete schedule of river closing is being developed, according to U.S. Army Corps of Engineers (USACE) Maj. Gen. Mark Toy, commander of the corps’ Mississippi Valley Division.

The Price Lock and Dam, which was extensively renovated in 1989, is one among the “newest” structure on the river and will not be closed as part of the infrastructure program, according to the briefing.

Because most barges must traverse multiple lock-and-dam complex on their way up or down the Mississippi, closing any one of the river’s 27 lock-and-dam complexes, effectively closes the entire river upstream to commercial traffic —and generally creates substantial barge traffic backups downstream.

That means the St. Louis area will, for many periods over the next 10 years, become the northernmost point on the Mississippi for the loading and unloading of barges.

That could mean a substantial increase in rail and truck shipments of agricultural and other commodities to America’s Central Port in Granite City, the Kaskaskia Port District and other intermodal transfer facilities in the area, according to spokespersons for the Bi-State Development Agency. 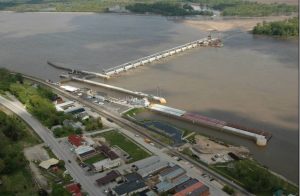 Lock and Dam 24 in Clarksville, Missouri, along the Upper Mississippi River is part of a federal 10-year infrastructure program along the waterway. (Photo courtesy of U.S. Army Corps of Engineers)

Aside from the Price Lock and Dam at Alton, the Clarksville and Winfield locks are the southernmost on the Mississippi River, and their closing will effectively shut down all commercial traffic on the river to the north.

The closing on the Mississippi comes in addition to the unprecedented 120-day closing of the Illinois River for lock and dam repair next year.

To minimize the periods during which the Mississippi is completely closed to commercial traffic, the USACE plans, whenever possible, to undertake renovations at multiple locks and dams at the same time.

Mindful of the potential effects of shipping disruptions on commerce, the Army Corps has been planning the river closing collaboratively with business and agricultural, Gen. Toy said. He has been holding meetings with stakeholders along the waterway, in his capacity as president of the Mississippi River Commission.

The commission was established by Congress to develop plans to improve the condition of the Mississippi River, foster navigation, promote commerce, and prevent destructive floods.

Major renovations at most of the other structures along the river are “long overdue,” according to speakers at last week’s briefing.

So important is the Mississippi and other inland waterways to the U.S. economy that the planned improvement projects will, by 2045, cumulatively increase the nation’s gross national product some $73 billion, according to a new U.S. Department of Agriculture report, “Importance of Inland Waterways to U.S. Agriculture,” released last month.

However, no one yet really knows exactly how, or if, the thousands of tons of soybeans, corn, coal, steel, and other commodities, that area annually shipped along the Mississippi, can be rerouted.

Development of alternative shipping routes has become a recurring theme at meetings hosted by the Mississippi River Commission and other organizations for commercial river users.

Shipping lines are only this month fully recovering from barge traffic back-ups from resulting from this year’s spring flooding.

The new USDA report notes that many Midwestern railroads are already operating near capacity.

“Similar to the USACE closures on the Illinois River for infrastructure improvements, the St. Louis region stands ready to accommodate freight flows shipped prior or after a closure or with an alternative mode of transportation. Infrastructure investment along our  inland waterway system is critical to the U.S.’s ability to compete in the global market and we appreciate the U.S. Secretary of Agriculture’s leadership with taking on this important challenge,” said Lamie, in a prepared statement for the Chronicle.

However, quietly, Bi-State staff are concerned that shipping lines and their clients have not been making firm plans for even the more limited closing of the Illinois River.

As river closings are officially scheduled, they will be formally announced on the USACE’s Navigation Notices website (https://ntninotices.usace.army.milis).