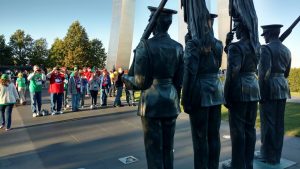 But before this happens, many of these 23 Air Force, 39 Army, 13 Marine and 10 Navy Vets, along with their Guardians, family and friends, will have enjoyed a pre-flight dinner in their  honor the night before at VFW Post #10302 in Springfield.

Eighty-five (85) Veterans and their Guardians will arrive at the airport Tuesday morning at 4:45, having traveled from the 57 Illinois cities and communities .

The veterans will board three luxury motor coaches upon arrival at Ronald Reagan National Airport in D.C.

Their most important stops will be at the World War II, Korean and Vietnam War memorials, as well as Arlington National Cemetery for the Changing of the Guard ceremony at the Tomb of the Unknowns.

This day of honor is provided at absolutely no cost to our veterans.

The return to Springfield’s airport is planned at 9:30 p.m. and the general public, along with friends and family, are encouraged to welcome home these heroes. Come early. All are encouraged to wear red-white-blue patriotic colors, bring balloons, posters, etc. to show appreciation and support to the veterans who served and sacrificed so much for our country.

Any certified terminally ill Veteran should contact LLHF directly. Veteran or Guardian Applications may be obtained at www.LandofLincolnHonorFlight.org by clicking on Applications tab.