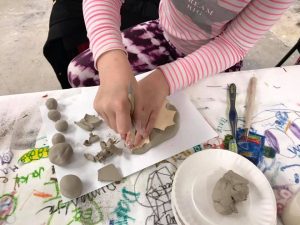 With a new director in place, the Peoria Art Guild is offering a full calendar of arts classes for both kids and adults in a variety of art genres, including clay creation, pottery, metal sculpting and drawing. (Photo courtesy of the Peoria Art Guild)

After a few lean years, the Peoria Art Guild is back in business with a new director at the helm.

“One of the main things I wanted to do was bring the Peoria Art Guild back to its glory,” said Shannon Cox, who was hired to direct the nonprofit organization last November. “It’s the oldest arts organization in the state, so I was pretty humbled when they asked me to lead it.”

Founded in 1878, the guild suffered financial trouble during the 2008 recession and then was hit again by a loss of state funding during the Illinois budget crisis that stretched from 2015 to 2017.

The guild had been without a director for about three years, suspending programming in 2016 and selling its 8,000-square-foot building at 203 Harrison St. to engineering consultants Crawford, Murphy & Tilly. The guild now rents space in the building for first-floor offices and basement-level art studios and classrooms.

Before being named guild director, Cox co-directed the guild’s annual Fine Art Fair last year along with Kim Sanders. Both women will co-chair this year’s fair again in September.

Cox said the guild no longer relies on state funding. “Our funding comes mostly from the Fine Art Fair and also donations, sponsorships, endowments and our membership bases,” she said.

Some funding also comes from classes, workshops and camps for teens and adults, which Cox has focused on rebuilding.

“Since Shannon’s placement as director of the Peoria Art Guild, we feel that the guild has once again become a vibrant member of the arts community,” said local artist Eileen Leunig, who with her husband, Doug, formed the nonprofit Big Picture Initiative that consists of artists, arts advocates and visionaries committed to shedding light on Peoria’s potential as an international arts destination.

“Classes for all ages are returning to the guild, along with gallery exhibits. Shannon provides a new fresh perspective on the arts with fundraisers such as Found Art and her welcoming attitude to partner with Big Picture Peoria on two new murals on Washington Street,” Leunig added. 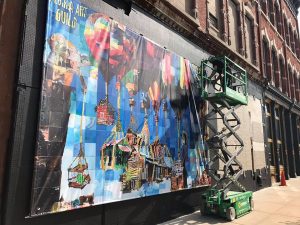 The Peoria Art Guild and Big Picture Peoria collaborated recently on the installation of two murals at 420 SW Washington St. in downtown Peoria, including this one that is a reproduction of the Fine Art Fair community mural painted by the public last September. The image is based on work created by artist John Leben and was painted by more than 350 fair attendees. (Photo courtesy of the Peoria Art Guild)

The Art Guild also participates in Peoria’s First Fridays, an event in which artists open their studios to the public. The guild typically hosts an opening reception for a new exhibit at First Friday events.

Available classes currently include a six-week Tuesday Night Creative Arts Discovery Club for two age groups: 5-9 year olds and 10-14 year olds. “Kids learn different art skills throughout that six weeks, and at the end during the First Friday they have a little exhibit that they can invite their parents and grandparents to,” Cox said.

One of the projects the younger kids have done is to build a dollhouse or treehouse, which they decorate using art skills. “They did things like use clay to make furniture and used printmaking skills to make wallpaper,” Cox said. “The older kids learn additional art skills, such as painting and blending and mixing colors.”

The next Tuesday Night club will start May 28 and costs $108. Peoria Art Guild members receive a discount on class fees.

This summer the guild is offering clay creation workshops and pottery wheel throwing camps for teens. “We have full functioning pottery wheels and kilns,” Cox said, adding that pottery classes are also offered for adults.

Other adult classes include a metal sculpting series, drawing classes and a three-class workshop on how to build a fairy garden.

Adults can also attend the weekly Way Out Wednesday Art Experience. The classes feature different art techniques such as wood-burning, chalk pastels and making dream catchers. The classes run from 6 to 8 p.m. and cost $25.

“We call it mid-week recess,” Cox said. “It’s for people 21 and older because they can bring their own wine and snacks. No prior experience is needed.” 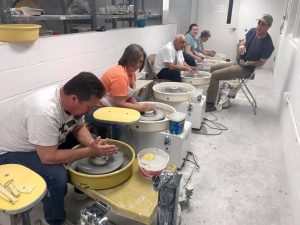 “We pay our artists $25 an hour to teach for the time they are in front of a student,” Cox said. “They’re very talented, and we want to support them. We’re always looking for new instructors and new experiences to give.”

Artists interested in pitching a class or workshop idea should send an email to info@peoriaartguild.org.

Another goal Cox has been working toward since becoming the guild’s director is developing relationships with other arts organizations in the community.

“There are 180 different arts organizations, venues, nonprofits and retailers that are art-related in Peoria and the surrounding area,” Cox said.

Cox has helped facilitate bi-monthly meetings of local visual artists and arts organizations with a common goal of enriching Peoria with the arts. Meetings are held at the Peoria Riverfront Museum.

“Collaboration is the key to success, and a rising tide floats all boats,” Cox said.

This fall she plans to revive a former Art Guild initiative called the Mentor Apprentice Program. “I’ll be reaching out to all the high school art teachers in Peoria County and the surrounding counties and asking them to refer me to students who are passionate about art and want to further a career in art,” Cox said.

After reviewing portfolios, the guild will select 12 students to participate in a 16-week program beginning in January in which they’ll learn a new skill each Saturday from guild artists. The program will culminate in a show of the students’ work.

The public is invited to view exhibits at the Art Guild from 9 a.m. to 2 p.m. Tuesday through Friday. On display currently through May 30 are 65 pieces created by 39 Peoria Art Guild artist members. Opening with a reception at First Friday on June 7 will be an exhibition of oil paintings by Ann E. Coulter, which will run through June 28.