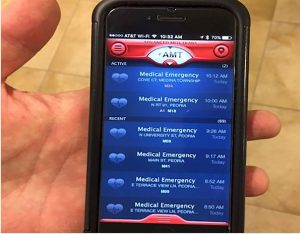 While Pokemon Go is the hottest craze for smartphones right now, Advanced Medical Transport of Central Illinois is hoping an app it launched about the same time will take off and actually save lives.

PulsePoint is not a game like Pokemon Go, but is a free smartphone app that notifies registered users when someone in a public place within walking distance of their location needs cardiopulmonary resuscitation. It was launched in the Peoria area at the end of June.

“Sudden cardiac arrest is the leading killer of people in America. For a person in cardiac arrest, their chance of survival decreases by 10 percent every minute that they don’t have intervention,” Bradshaw said.

“Even in the best case scenario, an emergency responder will be at least a few minutes away unless they just happen to be right on top of the call when it comes in,” he added. “So if you can mobilize bystanders and enable them with CPR skills and they can be alerted via this app, you can have someone deliver that care in those very critical first few minutes.”

Since PulsePoint was introduced nationally in 2011, more than 10,000 citizen responders have been activated to more than 3,500 cardiac arrests, Bradshaw said.

The app is available in 1,100 communities in 22 states. Naperville near Chicago is the only other community in Illinois that has it.

An off-duty fire chief developed the app when he realized after the fact that someone in his immediate vicinity had suffered cardiac arrest. “He realized he had all this training, yet he had no way of knowing that just a few dozen yards away there was a person who needed help,” Bradshaw said.

“It was one of those ideas that got sketched out on a napkin as they thought about how all of our phones have GPS on them and the ability to push notifications, so they kind of engineered this way of making it happen.”

The app was developed on the West Coast and is up and running in bigger cities such as Seattle, Las Vegas and Miami, Bradshaw noted.

“It’s unusual for a community our size to be able to make use of it, but AMT is so determined to push our resuscitation rates higher that we’ve implemented it here,” he said.

At 27 percent, Peoria’s sudden cardiac arrest resuscitation rate is already three times higher than the national average of 9 percent, according to Bradshaw.

“We want to push it further and reach 60 percent,” he said. “A person in cardiac arrest needs immediate CPR and, if indicated, a shock delivered from an AED. They need someone to start CPR on them as soon as they drop to the floor.”

Based on research studies, the American Heart Association now approves hands-only CPR for use on teens or adults who suddenly collapse, eliminating the need for mouth-to-mouth resuscitation.

“You can learn hands-only CPR skills in just a matter of minutes,” Bradshaw said. “All you need to do is call 911 and push hard and fast on the center of the chest at a depth of about two inches and at a rate of about 100.”

When a person calls 911, the call goes to the downtown dispatch center and in real time the city’s dispatch center shares that call with AMT’s dispatcher to send an ambulance, Bradshaw explained. “The PulsePoint software that runs in our communications center seamlessly sends out that alert to any of the people who have the app on their phone and are within a quarter mile of that emergency in cases in which CPR might be warranted.”

The app also shows the location of the nearest publicly accessible Automated External Defibrillators and even coaches a person through CPR and gives a metronome to keep the proper pace for compressions.

“If someone in Wal-Mart was four or five aisles away and dropped down in cardiac arrest, and I was there, I might never know. Now we have this way of being alerted,” Bradshaw said. “I think people in general really do want to help if they’re given the opportunity.”

Within the first 10 days of rolling out the app, about 525 people downloaded it and registered. AMT is hoping to expand that number to include thousands more. 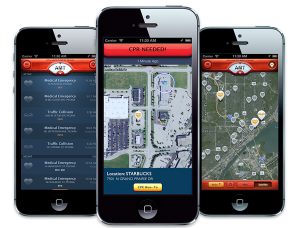 While AMT has a responder map showing general locations of the people using the app, Bradshaw said no other information about those people is available, which protects their privacy. Furthermore, app users are under no obligation to respond to any emergency. If they do respond, they’re protected from any liability under the Good Samaritan’s Act.

AMT hosts hands-only CPR public education tables at various community events and offers free classes at 5:30 p.m. the third Thursday of each month at its facility at 1718 N. Sterling in West Peoria.

“We have trained 27,000 people in CPR over the years and donated about 665 AEDs in our service area,” Bradshaw said. “We respond to about 230 cardiac arrests each year in the Peoria area.”

PulsePoint had an emergency notification activation last week in which two responders were within range of an emergency in downtown Peoria. However, the patient ended up being in seizure, not cardiac arrest, Bradshaw said.

“No CPR was indicated in that episode. But it will be just a matter of time until we have a dramatic bystander save,” he added.

The app is available in all of AMT’s service areas in Tazewell and Peoria counties, including Peoria, Pekin and Chillicothe.

The PulsePoint app can be downloaded at www.pulsepoint.org/download or by visiting the App Store or Google Play. For more information, visit Advanced Medical Transport’s Facebook page or call (309) 494-6200.

— App helps alert users to CPR emergencies as they happen —