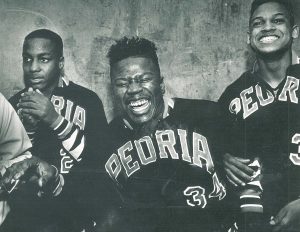 It’s true, Howard Nathan was a phenomenal basketball player. But there are no statistics, titles or championships that can really speak for who the Peoria Manual High School legend really was.

“Howard was always the entertainer. He never met a person he didn’t consider a friend. In high school, he was always the life of the party,” Derrick Booth said. “You didn’t need to be the most popular, or athletic to be in Howard Nathan’s circle. He embraced everyone, and everyone in the community, as a whole.”

Howard Nathan, 47, died July 28 at OSF St. Francis Medical Center in Peoria, three weeks after he collapsed in his home. Despite exhaustive efforts to fully resuscitate him, Nathan passed away “peacefully,” as his family described.

It is a sad ending for a man whose life was punctuated with monumental victories and overwhelming defeats. On June 30, 2006 his car was struck by a drunk driver and he never walked again.

“Peoria was getting ready to start the Peoria Kings, and he was preparing to play for that team,” Booth said. “He was still in his baseball playing days at that time.”

Booth is the Director of Social & Emotional Learning for Peoria Public School District 150, and was Nathan’s closest friend. The played ball together at Manual and graduated the same year, 1991.

That year, the Illinois Basketball Coaches Association named Nathan Illinois Mr. Basketball, an annual award given to the best high school basketball player in the state. That year, he averaged 19.7 points and 4.5 assists, and led the Rams to a second-place finish in the Class AA tournament.

Booth played ball with Nathan at Blaine-Sumner Middle School, the two were like brothers, he said, and Nathan’s abilities on the court drew crowds early on. At Manual, under the coaching of Dick Van Scyoc, Nathan flourished

The 5-foot-10 guard averaged 20 points per game, and is considered a key player that launched the Rams into a historic winning streak, resulting in four straight Class 2A titles from 1994 through 1997.

He later played ball at DePaul University, then at Louisiana-Monroe before a brief pro basketball stint with the Atlanta Hawks during the 1995-96 season. He was also featured in the 1994 documentary, “Hoop Dreams”.

But Nathan was a Peoria son, a legend in his home town for his passion on the court and the thrills he brought to a very close-knit community.

“Manual is a family and a community in itself. Individuals who attended here, No matter how far back it goes, they still see Manual as a family,” Booth said. “When we lost an icon like Howard Nathan, we lost a family member who did so much to bring joy in the ‘90s on the basketball court, and it gave Manual such a sense of pride, as well as the whole community here.”

Nathan, he said, gave Manual a brand in an area with a rich tradition in basketball, through his toughness, his confidence and his unbridled passion for the game. Despite the confines of his wheelchair, Nathan continued to mentor and inspire young players.

From 2014-17, while Booth was the Rams head coach, Nathan worked under him as an assistant coach, and remained involved in the program after Booth moved on to his position with the school district.

“After his accident, he joined the Manual coaching staff, he mentored youth by showing up every day at the gym, always being in a positive mood, never complaining,” Booth said. “He was always strong. Always. He’ll be greatly missed, not just for being an athlete, but for the friend he was to the Peoria community.”