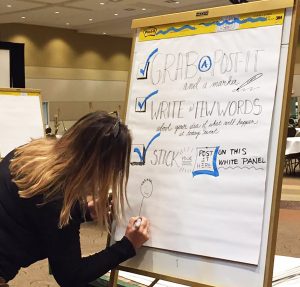 The Big Table: Rural Matters meetings are an outgrowth of a larger Big Table: Greater Peoria brainstorming event that was held in October. About 700 participants at that day-long meeting discussed topics such as work force development, innovation, entrepreneurship, diversity and inclusion. (Photo courtesy of the Greater Peoria Economic Development Council)

Delavan Mayor Liz Skinner was more than happy to host members of the Greater Peoria Economic Development Council earlier this month for a brainstorming session designed to give everyone a voice on the needs of small rural communities.

The Tazewell County city was one of five chosen to host Big Table: Rural Matters meetings in the GPEDC’s five-county area that also includes Peoria, Woodford, Mason and Logan counties.

“I think it’s always great when there’s an opportunity for community leaders in the region to sit down and talk,” Skinner said. “You think you’re living in a vacuum, perhaps, and then you find out everyone else around has a lot of the same problems or challenges. I also liked the fact that we could do it with members from other smaller communities. It wasn’t just Peoria or Washington or the larger communities.”

The Big Table: Rural Matters initiative is an outgrowth of the original Big Table: Greater Peoria event that took place in October. That day-long meeting at the Peoria Civic Center brought in about 700 people to discuss topics such as work force development, innovation, entrepreneurship, diversity and inclusion.

“That was really spearheaded by the Peoria CEO Council, and we partnered with them and numerous other organizations, including the chambers of commerce throughout the region, for that,” said Tory Dahlhoff, the GPEDC’s director of communications and outreach and rural development coordinator.

NEXT MEETING: Meetings have since taken place in Delavan, Brimfield, Havana and Metamora, with the last one set from 4 to 7 p.m. Thursday, Jan. 30, in Lincoln at the Lincoln College Performing Arts Center.

While the turnout for the October event was impressive, Dahlhoff said organizers noticed a lack of participation from outside the main urban areas.

“Big Table: Rural Matters is really just an extension of that main event back in October to make sure we’re hearing from our smaller communities throughout the region,” he noted.

Public input from the main event and the rural meetings will help EDC officials create a comprehensive economic development strategy for the region. An updated strategy plan should be coming out in May, Dahlhoff said.

The five host communities were targeted because of their accessibility to the surrounding areas and availability of meeting venues. The meetings are casual with break-out sessions during which participants can bring up issues that are important to them.

“We’re really letting people that participate and show up set the agenda in terms of what topics we discuss, with the idea being that the people living there or working there have a better idea of what are the most important issues,” Dahlhoff said.

About 55 people turned out for the first meeting in Havana in December, followed by 35 in Metamora.

“We’re aiming for about 50 to come out to these with a mix of residents and business owners and some government or elected officials,” Dahlhoff said.

At the Havana meeting in Mason County, conversations focused on how to tie natural resources into economic development. “They’re really interested in leveraging natural resources like the river and Sand Ridge State Park for more tourism activity,” Dahlhoff said.

With the recent closing of Havana’s long-time coal-burning power plant by Vistra Energy, discussions also centered around job retention and bringing new jobs to the region, he added. 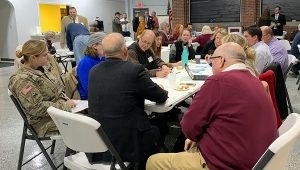 About 55 people turned out to a Big Table: Rural Matters meeting in December in Havana that was hosted by the Greater Peoria Economic Development Council. GPEDC officials have been holding meetings in rural areas of Peoria, Woodford, Mason, Logan and Tazewell counties to gather public input on issues that are important to those smaller communities. (Photo courtesy of the Greater Peoria Economic Development Council)

Similar themes were heard in the Woodford County village of Metamora, along with the topic of organic agriculture.

“There was talk of how do we leverage agriculture for economic development all the way down to retail,” Dahlhoff said, adding that some participants specifically raised the question of how to bring a farm supply store to Woodford County.

About 40 people attended the Brimfield meeting in Peoria County earlier this month where discussions focused on local foods and agriculture, housing and senior housing development, communication with county government about rural issues and workforce, entrepreneurship and business development.

“In Brimfield a participant actually had a specific issue worked out on the spot regarding a street repair as she was able to connect with county staff who gave her the proper steps to get it addressed,” Dahlhoff said. “I like this story because it shows there is value in simply getting people together.”

“The lack of a grocery store has been a big issue since ours burned down several years ago, and also access to daycare is a big concern. That is something we are actively addressing,” Skinner said.

The thing she found most helpful was learning about funding possibilities.

“I think with everyone the biggest challenge when we bring up these topics is that’s great, but where do you get the money,” Skinner said. “And there were several people at the meeting who provided information about funding sources that we’re checking on. I think that was very valuable information.”

Dahlhoff said all the participants so far have seemed to appreciate the opportunity to get together and discuss issues and to connect with resources, such as the GPEDC, city and county staff, USDA Rural Development officials and educators.

“We’re using all of the input to inform our next five-year strategy, and we hope participants will continue to stay engaged with that process and the actions that can result from a regional collaborative strategy,” he said.

Organizers of the Big Table: Greater Peoria event are planning to release a report from that meeting later in February, which Dahlhoff said will include at least some of the information gathered from the rural meetings.

“And then there’s consistent talk of how do we continue this type of activity in 2020 and beyond. So there’s definitely lots of interest in making sure we’re continuing these regular public engagements with folks,” Dahlhoff said.

For more information or to register for the Lincoln meeting, visit the website www.bigtablegp.com or email Tory Dahlhoff at  tdahlhoff@greaterpeoriaedc.org