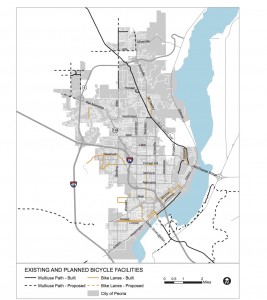 Taking a page out of the city of Peoria’s extensive bicycle master plan, a regional group of experts specializing in land use have visions of expanding on the document in the year ahead.

The Tri-County Regional Planning Commission — a consortium organization serving Peoria, Tazewell and Woodford counties — has a number of initiatives on the docket this year, one of the most notable being a plan aimed at linking up bike and pedestrian features throughout the area.

Eric Miller, Tri-County’s acting executive director, recently discussed with the Chronicle some of the commission’s efforts in the year ahead, the most prominent being the bike and pedestrian planning.

“We’re excited about it,” Miller said. “We have a great steering committee that includes a good, broad-brushed group of folks.”

Across the U.S., municipalities, counties, states and organizations such as Tri-County are discussing recreational accommodations, which frequently have been listed as a favorable amenity by the up-and-coming demographic population of millennial.

City of Peoria officials embarked on an ambitious master plan document. The effort began in 2014 and was completed last year. The document, available on the city’s website at www.peoriagov.org, outlines long-range on-street and off-street accommodations, guidelines for future construction projects and potential funding partners.

Miller said the commission is working with the city of Peoria and other municipalities throughout the three counties to link up some of those existing paths.

As with any project, one of the potential stumbling projects is cost and how funding will come into play. Echoing a sentiment shared by many county and municipal officials across Illinois, Miller said the budget stalemate in Springfield has hampered future visioning efforts.

“The actions at the state level have made it difficult to plan,” he said. However, he added other mechanisms — including federal funds — have helped. Based on the commission’s current timeline, Miller said Tri-County aims to present a draft version of the bike and pedestrian plan in July or August of this year.

One other related effort that closely ties into the bike and pedestrian plan is wayfinding signage that could be installed along trails and nearby roadways to help bicyclists, pedestrians and motorists find areas of interest.

Another transportation-themed project on the minds of Tri-County commissioners is freight accommodations for roadways throughout the counties. New standards could be put in place.

Miller said this specific effort has gained momentum as one pivotal agency, the U.S. Army Corps of Engineers, has conducted an analysis of environmental areas, including land in and near the Illinois River.

“There’s been some buy-in by environmental groups, and a consensus has been built around it,” Miller said.

Funding for the freight project could be in place by October of this year.

Additionally, commissioners are working with county and municipal officials throughout the region to harness technology and ramp up digital mapping efforts through geographic information system, or GIS, software.

“We’re looking forward to the year ahead and working with all of our member communities,” Miller said. “There’s a lot of work ahead for everybody, and I think we’re all excited to start digging in.”

Tri-County recently made news for reasons other than its planning efforts. The group’s name could have been subject to change when one member county — Woodford — considered withdrawing from the group.

Nonetheless, the Woodford County Board decided recently, on a 10-5 vote, to retain membership through November of this year. Each of the three counties pays $16,000 for membership.

Opponents of membership asserted Woodford County receives less in services than its two counterparts. But proponents asserted the commission offers planning resources that are not available in-house and builds on regional interests.

For more on the bike plan and other Tri-County Regional Planning Commission projects, visit the web site by clicking here.