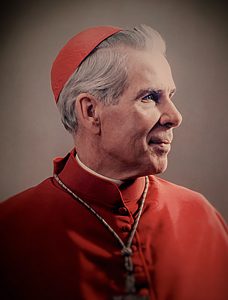 One hundred years ago, Fulton John Sheen knelt in The Cathedral of Saint Mary of the Immaculate Conception and was ordained a priest of the Diocese of Peoria. His first mass took place beneath the cathedral’s twin spires and his body now rests there in a marble tomb beside the Blessed Mother Mary altar.

Yet on Saturday, Dec. 21 — the day the venerated archbishop was to be beatified in what might have been the most historically significant ceremony in St. Mary’s 130-year history — the 1,000-seat cathedral stood empty.

Sheen’s beatification was delayed earlier this month after objections were raised by a Rochester, New York bishop.

The ceremonies have not been rescheduled.

“With deep regret, Bishop Daniel Jenky announces he has been informed by the Holy See that the beatification of Fulton Sheen will be postponed,” the Diocese of Peoria announced Dec. 3. “Bishop Jenky is deeply saddened by this decision. In particular, (he) is even more concerned for the many faithful who are devoted to Sheen and who will be affect by this news.”

Sheen’s beatification was stymied by Bishop Salvator Matano of New York’s Diocese of Rochester, who recently asked the Apostolic Nuncio (Vatican ambassador) to the United States to delay the beatification due to concerns regarding an ongoing state attorney general’s investigation into the Roman Catholic dioceses of New York state.

Matano claims Sheen could be named in a report by the attorney general, or accused of insufficiently handling allegations of abuse against a priest during his tenure as Rochester’s bishop from 1966-69.

The Diocese of Rochester said in a Dec. 5 statement that there was no evidence that Sheen had committed any inappropriate actions.

“There are no complaints against Archbishop Sheen engaging in any personal inappropriate conduct, nor were any insinuations made in this regard,” the Diocese said.

But Sheen is accused of handing priest Gerard Guli an assignment in the Diocese of Rochester, despite a 1963 allegation that Guli committed abuse or misconduct against adults while in West Virginia.

According to Msgr. James Kruse, director of canonical affairs for the Catholic Diocese of Peoria, Matano is attempting to sabotage Sheen’s cause, and one need simply take a close look at the bishop’s timeline.

Before beatification can take place, Sheen’s remains must first be interred at the cathedral. After a protracted series of legal battles, the Superior Court of New York ruled in favor of the Peoria diocese on June 7. A day later, the Diocese of Rochester sent Peoria the documents regarding the two clerics. 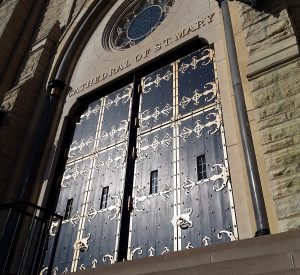 Instead of throngs of supporters and worshipers gathering at St. Mary’s Cathedral last Saturday, the doors were closed as the planned beatification ceremony for Bishop Fulton J. Sheen was put on hold. (Photo by Holly Eitenmiller / for Chronicle Media)

It was asserted, Kruse claims, that the documents were also sent to Rome that day, and when the Vatican unofficially set Sept. 20 as the unofficial date for Sheen’s beatification, it appeared the matter was over. Instead, it is believed that Matano delayed sending the documents to the Vatican until July 11.

On July 24, the Vatican’s Secretary of State notified the Peoria Diocese that Sheen’s beatification would be delayed until the Congregation for the Causes of Saints studied the issue.

In September, Vatican and Peoria officials agreed no wrongdoing was committed by Sheen.

The beatification ceremony was then set for Dec. 21, and was announced on Nov. 18. A day later, Matano requested another delay, claiming Sheen could be cited in the final report regarding the state attorney general’s investigation. And that might take a while.

Earlier this year, the New York Child Victim’s act was adopted by state legislature, lifting the statute of limitations for accusers to file legal claims sexual abuse they suffered as children, regardless of when it occurred.

Claims may be filed for one year, and the gate was lifted on August 14. Since then, more than 580 lawsuits have been filed statewide, with 59 of them listing the Rochester diocese as defendants. On September 12, Matano appeared in U.S. Bankruptcy Court to file the diocese’s petition for Chapter 11 reorganization.

The petition estimates the diocese’s assets as high as $100 million, with liabilities of up to $500 million. The move is intended to provide protection from the potentially mammoth judgments and the financial follow out that could follow.

Regardless, the Peoria diocese remains confident that only positive discoveries will come from further investigation into the archbishop’s life, which has already undergone years of intense scrutiny.

Sheen’s Cause for Canonization began in 1998, when The Archbishop Fulton J. Sheen Foundation was formed. In 2002, the cause was officially opened by Jenky, and a diocesan investigation continued until 2009, when Sheen’s sealed records were submitted to the Vatican.

The cause was paused in 2010 when the Archdiocese of New York began a disagreement over the return of Sheen’s remains to Peoria. Despite the delay, the Peoria diocese persisted in venerating the celebrated archbishop.

“In our current climate, it is important for the faithful to know there has never been, nor is there now, any allegation against Sheen involving the abuse of a minor,” Jenky said in his recent statement. “It has been demonstrated definitely that he was an exemplary model of Christian conduct and a model of leadership in the Church. At no time has his life of virtue ever been called into question.”

Indeed, Sheen was quite a celebrated personality, even on a national level. In 1930, he launched “The Catholic Hour”, an NBC Sunday night radio show that endured for more than 20 years and attracted 4 million listeners each week.

Sheen’s weekly television show, “Live Worth Living” debuted on February 12, 1952 and was an immediate success. Within two months the show was broadcast on 15 stations, and by year’s end, he beat out Lucile Ball and Edward R. Murrow for an Emmy for Most Outstanding Television Personality.

The show lasted until April, 1957, and, at its peak, drew 30 millions viewers and at least 8,000 fan letters each week. Two television shows followed, along with an international cassette tape ministry, and, over his lifetime, Sheen penned 73 books.

Yet it is in central Illinois where Sheen’s legacy takes its deepest course. In El Paso, where Sheen was born in 1895, volunteers established the Archbishop Fulton John Sheen Spiritual Centre. It is situated in the Historic El Paso Train Depot, near the Fulton Sheen Birthplace memorial on Front Street.

At the Spalding Pastoral Center in Peoria, where Sheen attending high school, the diocese maintains The Archbishop Fulton J. Sheen Museum. Artifacts from the archbishop’s life are house in five collections, and include  writings, books, photos and an ornate throne.

In response to the ceremony’s postponement, Jenky asked the dismayed faithful to join in a nine-day novena to “petition God unceasingly” that the cause to beatify and canonize Sheen move forward. The novena began with the Feast Day of Our Lady of Guadalupe on December 12, and was meant to “instill hope to all those saddened and disappointed by the delay announced so close to the expected beatification”.

For those observing from the church’s perimeters, such grief may seem a bit melodramatic, and may best be understood through words of those who revere the man.

“You have blessed your church through the life and ministry of your faithful servant, Archbishop Fulton J. Sheen,” wrote a church member in a 2017 Facebook post. “(He) was a true instrument of the Holy Spirit in touching the hearts of countless people. If it be according to Your Will … we ask You to move the Church to proclaim him a saint.”

Many of the faithful became rooted in the belief that Sheen was worthy of canonization based on an act of faith made by two parents of a stillborn child.

On July 26, the Vatican Congregation for the Causes of Saints approved a miracle, as part of the beatification process. Sheen is considered responsible for the recovery of James Fulton Engstrom, a Washington infant who was born stillborn in his parent’s home in 2010. Engstrom’s parents prayed to Sheen to save the child, and were joined by others in prayer until the boy’s heart began breathing 61 minutes later.