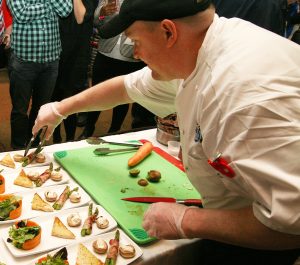 Anyone who’s a fan of the Food Network’s “Chopped” or who likes tasting chef-prepared bites will want to check out Neighborhood House’s sixth annual Food Fight Feb. 21 at the Par-a-Dice Hotel and Casino.

This year’s fundraiser will pit 12 chefs against each other in a battle to create a winning entree in just 45 minutes from a mystery basket that in the past has contained ingredients such as cactus leaves and Funyuns. A panel of three judges will choose the winner.

The event will even offer a chance for one attendee to win by auction with help from another chef.

“We do get a lot of people bidding on that,” said Bryna Ryan, director of community outreach and special events for the Peoria-based Neighborhood House.=

In addition to having an up-close view of the chefs in action, guests will be able to taste signature dishes from all the chefs, plus charcuterie, craft beer and wine and decadent desserts. A cash bar will also be available.

The event is one of two main fundraisers hosted each year by Neighborhood House to help fulfill its mission to “alleviate poverty at its root through an array of programs that provide critical short-term relief to diverse communities while facilitating long-term recovery.”

Originally founded as a settlement house in the late 1800s, Neighborhood House provides Meals on Wheels for seniors in Peoria and Tazewell counties, as well as on-site child care, summer meals for kids, before- and after-school care and many holiday programs.

“We provide nutritional support for over 1,000 children and seniors every day,” Ryan said. “This event helps raise money for us to be able to provide those much-needed meals to seniors and children.”

Last year’s Food Fight raised about $70,000. Bragging rights for the winning entree went to Jeff Madden, chef at Kemp 208 in Morton. Madden will be back to defend his title this year.

Also returning for the fourth time is Chef Amanda Pyle, who owns the Cookery in Morton. Pyle took first place the first time she competed in 2016 and placed second last year.

“It’s a good feeling to help the needy through competition using my everyday occupational skills and tools,” Pyle said. “I like the rush of competing, plus it’s good exposure for my business and I like testing the boundaries of what I can create personally as a chef. Competition and quick-thinking like this keeps me on my toes.” 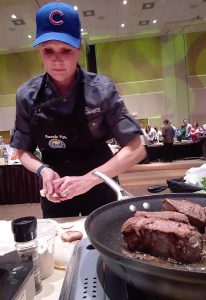 Chef Amanda Pyle, owner of the Cookery in Morton, works on her entree during last year’s Food Fight, a fundraiser for Neighborhood House. Twelve chefs will compete in this year’s battle on Feb. 21 at the Par-a-Dice Hotel and Casino. (Photo courtesy of Neighborhood House)

Asked about her thought process when first viewing the mystery ingredients, Pyle said, “My thoughts have ranged each year from knowing exactly what I was going to do and having an immediate plan in mind in year one to thinking, ‘Oh my God, what the heck am I supposed to do with this abomination’ in year three.”

“The baskets get bigger and contain more ingredients each year, which makes it tougher, in my opinion,” Pyle said. “It’s funny, though, you just never know what the ingredient will be that is going to throw you off.  Year one for me it was the kiwis, while others struggled with the cactus.  Year three, the Achille’s heal for me was having two proteins fighting to be the leader of the dish.”

Pyle added that the camaraderie among the chefs makes it a friendly, fun and almost laid-back, albeit intense, competition.

Ryan said the idea for the Food Fight originally grew from a desire to find a unique way to help the organization fight hunger. The event also includes a live auction of food-related experiences, such as a private dinner created by one of the chefs.

Neighborhood House is primarily supported by donations and grants. The organization’s other major fundraiser is a country-and-western-themed annual dinner called Saddle Up that takes place in August. 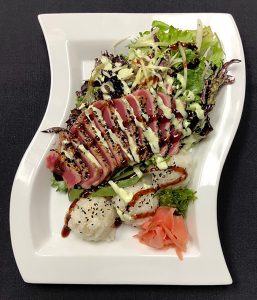 Professionally prepared foods like this plate from a previous year will be created from mystery ingredients by 12 chefs in the sixth annual Food Fight fundraiser on Feb. 21. Guests will have an up-close view of the chefs in action and also will be able to taste signature dishes from all the chefs, plus charcuterie, craft beer and wine and decadent desserts. (Photo courtesy of Neighborhood House)

Volunteers are needed at this year’s Food Fight to assist with check-in, pouring drinks at vendor stations, taking pictures and serving as spotters during the live auction.