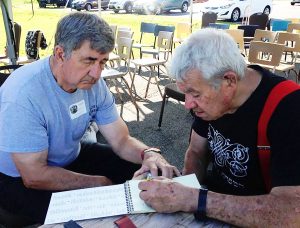 In a shop tucked away off Illinois Route 29 on Riverview Road in Chillicothe, Bud Harvey practices and teaches a craft that dates back for many centuries.

Harvey has owned and operated Hot Iron Blacksmith since retiring from Caterpillar in 2002 after a 37-year career as a metallurgical engineer. He first discovered and fell in love with the art of blacksmithing in 1997 after a friend invited him to take a week-long class in Missouri.

“There was a new school that was being opened, and the course was being taught by a master blacksmither from Israel. My friend knew both the proprietor of the school and the instructor. So I thought I might as well use up some of my vacation time and go down there, and I really loved it. From that point on it kind of escalated,” Harvey said.

The instructor, Yuri Hofi, has since become Harvey’s mentor and friend. He even has some of Hofi’s handworks on display in his shop.

“He struck me as approaching this craft with more of a technical approach, so he taught with a knowledge of mathematics and technique and not just sort of this is how the old boys do it,” Harvey said. “It was very disciplined. It really fit into my mode of thinking with my engineering background.”

Another thing that appealed to Harvey was the physicality of the craft.

“It was a typical hot week in the late part of May so it was hot and sweaty, and I thought: ‘Well, this is really good, I can just pound on things and get out my frustrations,’ ” he recalled with a chuckle. 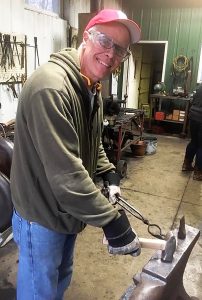 Chuck Evans of Pekin smiles while taking a beginner’s blacksmithing class in March at Hot Iron Blacksmith in Chillicothe. The business offers classes for all ability levels from September to June. (Photo courtesy of Bud Harvey)

Harvey came back from the class and told his wife, Janelle, that if he’d been born 100 years earlier, he probably would have been a blacksmith instead of an engineer. He has since taken additional classes from Hofi and other American master blacksmiths and is a past president of the Illinois Valley Blacksmith Association and a member of the American Society for Materials.

After retiring, Harvey first taught some classes for awhile for Bradley University students as part of the materials engineering curriculum and opened up classes at his shop to the public in 2016. He also teaches classes for select high school students through a summer camp sponsored by the American Society for Materials.

“We get clients and students from all over the state,” Harvey said of the 25 to 30 classes he offers to the public each year. “I actually have a student coming from northeastern Indiana right now.”

The day-long classes are offered in many experience levels between September and June and cost $100 each. Registration is currently being taken for his last class for this season on June 22.

“People don’t need previous experience,” Harvey said. “Generally, almost everyone is a first-time beginner with no prior experience or any abilities at all. Some have been craftsmen or machinists or carpenters or farmers or whatever, so they have a little more skill than someone who hasn’t done anything, but I handle all ability levels and ladies, as well as men.”

The only requirement to take a class is to be at least 16 years old.

Asked what he enjoys about teaching, Harvey said, “I think part of it is seeing people get so excited about what they’re doing. I had a student last week who told my wife that was the best day of his life ever. When you get those kinds of accolades coming back, it really makes it worthwhile.”

Most classes are limited to about five people so Harvey can help them one-on-one. Each class is treated to lunch made by Janelle Harvey, which was a perk Chuck Evans of Pekin enjoyed. 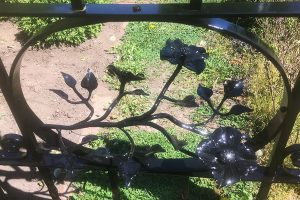 Bud Harvey, owner of Hot Iron Blacksmith in Chillicothe, created this customized decorative gate for a customer. In addition to offering classes, Harvey handcrafts a variety of art in metal that he sells on his website. (Photo courtesy of Bud Harvey)

“You’re sitting at the dinner table with them,  and the whole community aspect is very appealing,” said Evans, who took a class in March after receiving a gift certificate from his son and daughter-in-law at Christmas.

“I had no idea that something like that existed other than like at Silver Dollar City where you sit and watch a blacksmith work,” said Evans, who owns a home improvement business. “I’ve always enjoyed doing things by hand, and I don’t think you can get much more hands-on than blacksmithing.”

Along with two other people in a beginner’s class, Evans made a steak turner, a heart-shaped colonial rope hook and a cross forged from one piece of steel. “Everyone who looks at (the cross) says it’s really hard to imagine how it happened to be made out of one piece of steel, but I never give away the secret,” he said.

Evans encourages others to try one of the classes. “It would be a great memory for sharing with a son or daughter or spouse. I think everybody would get a big kick out of it,” he said. 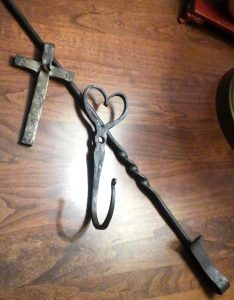 Chuck Evans of Pekin made these three pieces during a beginner’s blacksmithing class in March at Hot Iron Blacksmith in Chillicothe: a steak turner, a heart-shaped colonial rope hook and a cross forged from one piece of steel. (Photo courtesy of Chuck Evans)

While the art of blacksmithing is physically demanding, Harvey said, “I try to teach people in a way that takes away some of the stress on their hands and arms. It’s probably like dancing–you have to learn the motions before it becomes easier to do.”

In addition to teaching classes, Harvey handcrafts a variety of art in metal that he sells on his website.

“It’s mostly what I would consider decorative pieces that you might call house jewelry,” he said. “We also have smaller things like bottle openers and kitchen tools.”

Harvey also does commission work, such as decorative house railings and gates.

For more information on products or classes, visit https://www.hotironblacksmith.com/