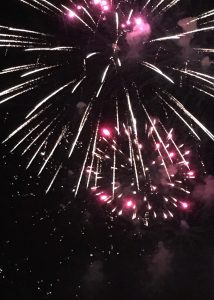 Bursting rockets and aerial star shells like this one will fill the sky at Chillicothe’s annual fireworks display July 4 at Three Sisters Park, located at 17189 N. Illinois Route 29. The show is free, but attendees are encouraged to throw a buck or two into the donation buckets that volunteers will be carrying around. (Photo by Elise Zwicky / for Chronicle Media)

Chillicothe’s fireworks display is much more than bursting rockets and aerial star shells lighting up the sky, according to volunteer organizers who spend a whole year preparing for it.

“Our intention is to make it a day-long event where people can come early, get a place to sit and eat before the show starts,” said Steve Mauer, who has chaired the all-volunteer fireworks committee for the past 16 years.

This year’s show takes place July 4 at Three Sisters Park, located at 17189 N. Illinois Route 29. Gates open at 4 p.m. with several food vendors on hand, as well as bounce games for kids being provided by a local church.

“We’ll have an ice cream stand and a vendor selling all kinds of sandwiches. People can buy food or cook out there,” Mauer said.

The fireworks will start at 9:15 and last about 35 minutes, he added. Mayor Don White will be the master of ceremonies.

While there’s no charge to park or to watch the show, Mauer said he hopes people will throw a dollar or two into the donation buckets that volunteers will be carrying around.

“It’s a $25,000 show we put on, and the money is all raised through donations,” he said. “If everyone who went through the gates would give us $1 or if a car load of people would donate $5, that would help so much.”

The committee holds fundraisers throughout the year to pay for the show.

“Basically, we have two golf cart runs a year, and each one of our restaurants usually has a fundraising night that gives us 25 percent of that night’s proceeds,” Mauer said. “The rest is just in-kind donations.”

Mauer said it’s a common misconception that the city of Chillicothe pays for the annual fireworks show.

“The city has no involvement at all other than a $2,500 donation,” said Mayor White. “It’s a great event and very popular here in town. I think it also brings people in from out of town because it’s one of the best shows in central Illinois.”

Mauer said the committee wants to keep the show and parking free but added, “It’s getting very hard 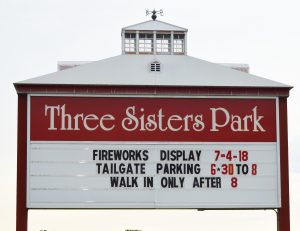 An all-volunteer committee has been holding fundraisers all year to pay for Chillicothe’s fireworks display, which will take place July 4 at Three Sisters Park, located at 17189 N. Illinois Route 29. Gates open at 4 p.m., and the fireworks will begin about 9:15 p.m. (Photo by Elise Zwicky / for Chronicle Media)

to get donations. Right now, we’re down about $1,700 from where we normally would be.”

Part of the issue has been the closure of two banks in Chillicothe that previously donated $1,000 each, he added. “You’d be surprised at the number of people who drive or walk past the buckets for donation. If we don’t get donations, we might not be able to have the event again or we might have to cut it back. The event for this year is already paid for, so what we’re doing is we’re raising money for next year.”

Mauer said there have been other years where fundraising was difficult, but the committee strives to have a $10,000 carryover each year for the following year’s fireworks show. The committee is currently in the second year of a three-year contract with Springfield-based Central States Fireworks to put on the show.

“We normally sign a three-year contract to lock them in on prices. People don’t realize that the cost of fireworks goes up 4 percent every year,” he said.

Three Sisters Park, a 400-acre privately owned park, doesn’t charge the committee for holding the fireworks show there. The event moved to the park about four years ago after being held on Chillicothe’s riverfront for many years until flooding issues forced the change.

“There was a year we didn’t have any fireworks, so some of us got together and said, ‘Hey, let’s make this happen,’ and we’ve been doing it ever since,” Mauer said.

“It’s grown every year,” he added. “What’s neat is people show up early, spread out their blankets and then they cook all day and stay there all night long. we usually have them out of there by 10 or 10:15 p.m. There’s no problem parking, and there’s no problem whatsoever getting out after the show.”

In addition to Chillicothe residents, Mauer said the show draws people from Princeville, Dunlap, Henry, Lacon and Peoria, among other cities. “We usually have about 3,000 to 4,000 people come out. Others line the streets in Chillicothe to watch or they watch the show from the high school. For a small town, it’s one hell of a fireworks show. We take pride in it,” he said.

Volunteers are needed to help solicit donations both at Three Sisters Park and at the outlying areas to help keep the show going next year.

Attendees should bring lawn chairs and/or blankets. The rain date will be July 5, although Mauer said in the 16 years he’s been involved, they’ve never had to switch to a rain date.

Fundraising for next year will begin right away with a “Red, White and Blues” event with music, food and drinks, a 50/50 raffle, and kids’ games and activities at 1 p.m. July 8 at the Casting Club, 1530 N. Second St. in Chillicothe.

“We usually start fundraising right away because we want it fresh in people’s minds that it was a great show so they’ll be inspired to donate to keep it going next year,” Mauer said.