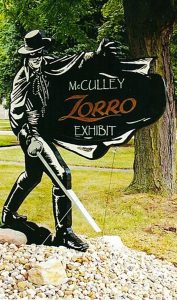 It’s not every day that Zorro, the fictional masked crusader, turns 100, so the Chillicothe Historical Society is throwing a party to celebrate.

The public is invited to the two-day anniversary bash on May 25-26 that will honor the centennial anniversary of the creation of Zorro by Chillicothe native Johnston McCulley.

“I think the town will be excited about it,” said Dianne Colwell, a past CHS president who’s been planning the Zorro celebration over the past year with a few other society members.

McCulley, who was raised by his grandparents in Chillicothe after the death of his mother, created 15 masked adventure characters that set the mold for today’s superheroes. He first created Zorro in a story he wrote called “The Curse of Capistrano,” which originally appeared as a five-part serial in the “All Story Weekly” magazine in 1919. The story later caught the attention of actor Douglas Fairbanks, Sr., who bought the movie rights and commissioned McCulley to write the screenplay for “The Mark of Zorro.”

In the past, the CHS has hosted four Zorro Fest parades and has an extensive McCulley/Zorro exhibit at its museum at 723 N. Fourth St. Opened in June 2013, the exhibit features a portrait of McCulley, a timeline of his life and accomplishments, examples of his work, posters, books and other collectibles.

The majority of items in the exhibit are on loan indefinitely by American cartoonist, painter and author Pete Poplaski, who may be the world’s largest collector of Zorro and Johnston McCulley artifacts.

Poplaski, who divides his time between Wisconsin and France, connected with CHS members after visiting Chillicothe about seven years ago seeking information about McCulley’s upbringing here. He attended the first two Zorro Fests in 2015 and 2016 and is helping to plan the 100-year party, which he will also attend.

Poplaski has more than 240 Zorro posters, among other Zorro memorabilia and collectibles.

Asked how he became a Zorro fan and collector, Poplaski quipped, “I just blame the gamma rays from 1950s television. I was a kid who sat too close to the screen with a towel around my neck as a cape.”

Poplaski remembers his mother making him a Zorro outfit when the McCulley character was featured on TV in 1957. “I was 6 years old. The first time I saw Zorro make the Z, I wanted to try making it,” he said.

As he grew older, Poplaski became a figurative artist interested in movies, cartoons and special effects.

“I’m 68 but I still on occasion put on a mask and cape for certain theatrical kinds of things. In France they have a thing called First of May when all the artist studios are open to the public. I took everything out of the bottom floor of my house and made everything a big gallery and dressed up like Zorro and jumped out the window, and people could come in and see (my artwork). It was just a fun day for me. That led up to people wanting to have some kind of exhibition of all my Zorro material,” he said. 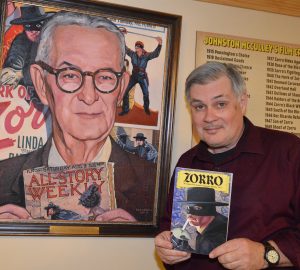 Holding a Zorro book that features himself on the cover, American cartoonist, painter and author Pete Poplaski poses next to a portrait he painted of Chillicothe native and Zorro creator Johnston McCulley that is part of a Zorro/McCulley exhibit at the Chillicothe Historical Society museum. Poplaski is helping CHS members plan a 100-year celebration of the creation of Zorro that will take place May 25-26. (Photo by Elise Zwicky)

Poplaski’s friend, artist Rika Deryckere, will travel from France as well to paint a Zorro mural outside the museum on the Fourth Street side during the celebration.

“We were thinking it might be a nice thing for the crowd to be able to watch someone paint a mural spontaneously, and it’s something that kids can learn from,” Poplaski said.

The celebration will have different stations set up to allow people to stroll around to take it all in. The theme on the first day, May 25, will be “Anyone Can Be Zorro.” Activities will begin at 10 a.m and will include an obstacle course on the back parking lot, a chance to draw Zorro’s signature Z on the sidewalk with chalk and a game to pin a Z on Zorro’s chief foil Sgt. Garcia. The event will also feature photo opportunities with Zorro props and a movie projector piñata. A limited number of souvenir Zorro buttons will be available, and birthday cupcakes will be served.

Winners of a pre-celebration coloring contest will be named in the afternoon on May 25. Winners will be treated to a meal in the 1929 Santa Fe caboose at the society’s Rock Island Railroad Museum in June. Coloring contest entries can be picked up at both CHS museums and at the Chillicothe Public Library. Entries are due by May 13.

The celebration will continue at 1 p.m. on May 26 with the presentation of a radio play, “Zorro: A Deal with the Devil” by Suzanne Herrera provided by Daryl McCullough, featuring local news director and Chillicothe native Ed Hammond. 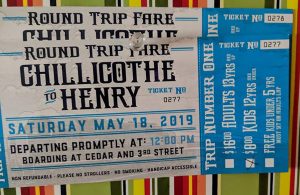 Mary Thompson of Creve Coeur snapped this photo of tickets she’s purchased for her and her 5-year-old granddaughter to ride a historic passenger train along the Illinois River from Chillicothe to Henry on May 18. The Ride the Rails event is sold out, but attendees at a talk by author James A. Brown on the history of the Atchison, Topeka & Santa Fe Railways in Chillicothe on May 13 can enter a drawing to win tickets. (Photo courtesy of Mary Thompson)

Zorro movies for kids of all ages will be shown throughout the afternoon in the cottage behind the museum, and presentations on Zorro will be given in the museum by Gary Fyke, CHS historian; Geoff Ritter, editor of the Carbondale Times; and by Poplaski.

The festival will also feature Johnston McCulley character mask prototypes created by Poplaski, including the Green Ghost, the Demon, Madame Madcap and, of course, Zorro.

Colwell is hoping to line up a few volunteers, particularly teachers or retired educators, to  lead tours through the Zorro exhibit and to supervise kids during the Zorro movies.

There is no admission charge to the festival or the museum, but donations are appreciated. For more information about the festival or to volunteer, email Dianne Colwell at chillirealdi@yahoo.com. Check the CHS website at www.chillicothehistorical.org for event updates.