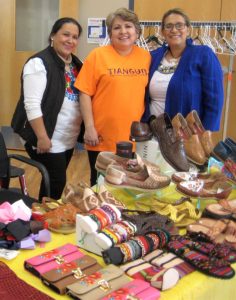 With its first National Endowment for the Arts Big Read grant, the Chillicothe Public Library has scheduled a variety of events in March highlighting Mexican culture and culminating with an author’s visit.

The library is showcasing “Into the Beautiful North” by Luis Alberto Urrea, a novel that CPL program coordinator Catherine Barnett calls “quirky and compassionate.”

In the book, an idealistic 19-year-old woman is inspired by the film “The Magnificent Seven” to travel from her home in Mexico to the United States to enlist seven men who’ve left her town to return with her to help protect it from drug-dealing bandidos.

“It deals with some pretty current topics and, as the library is kind of a center for discussion and exploration, we thought it would provide a good starting point for conversation at the same time as engaging readers with its quirky humor at heart,” Barnett said.

While the topics of borders and immigration are potentially divisive, Barnett said, “The author has a way of addressing these with a kind of compassionate irony that is quite charming. So we thought we could use that to harness the power of reading to erode walls between people and promote awareness and appreciation of different perspectives.”

That fits into the goal of the NEA Big Read program, which aims to inspire conversation and discovery through the joy of sharing a good book. The Chillicothe library is one of 78 organizations in 31 states to receive NEA Big Read grants this year.

Urrea will speak at the Chillicothe Public Library at 6:30 p.m. March 31. He will read from and discuss the book, answer questions and sign copies. Refreshments will be served and a sign language interpreter will be provided. Anyone wishing to attend is asked to pre-register at the library or by calling 309- 274-2719.

“None of the other events require pre-registration. We’re asking for pre-registration for the author’s visit because we may need to switch to a bigger venue if we have a huge turnout,” Barnett said.

The library is giving away free copies of “Into the Beautiful North” in both English and Spanish as long as the supply lasts. “We ordered 200 in English and 25 in Spanish, and we added several copies to our library collection. So if we do run out of free copies, people can check them out from the library,” Barnett said. “All those books that we’re giving away can be brought back to be signed by the author.”

Some of the upcoming programming is geared specifically for children, while others are for all ages. “A couple of the talks would probably be over the heads of some young children, but anyone’s welcome,” Barnett said.

The program kicked off on Feb. 20 at the Illinois Valley Community High School auditorium with performances by Peoria Folklore Ballet and Mariachi Viva Tecalitlan. A few days later, about 125 people attended a traditional Mexican street market featuring art and handicraft vendors, food and music at the library.

All ages and levels are welcome to practice vocabulary and conversational skills in a casual setting at “Spanish Language Conversation Table” events at 5 p.m. March 9 and April 16.

Several opportunities to discuss “Into the Beautiful North” are planned at various locations in Chillicothe and Peoria County. While it’s not necessary to have finished reading the book to attend the discussions, Barnett said there might be spoilers. No purchase is necessary at the restaurant-hosted chats, but some venues will have a book-themed special patrons might want to try.

Other upcoming events that will take place at the library include: 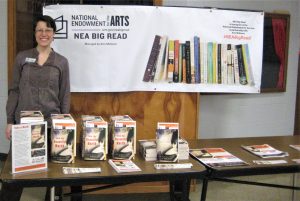 Catherine Barnett, program director for the Chillicothe Public Library, promotes the NEA Big Read program, which the library received its first grant for this year. The library has scheduled a variety of programming around the book “Into the Beautiful North” and is giving away free copies of the book. (Photo courtesy of the Chillicothe Public Library)

Through the book and the programs, Barnett said, “I hope we can continue nurturing bridges of understanding in our community. And I hope we can explore complex current events and hold civil conversations.”

She added, “One thing I took from the book is that people aren’t always what you think they’re going to be and you can’t always make judgments on what you’ve heard or what you’ve expected. People surprise you with their humanities and it’s good to stay open and hear people’s stories.”

For more information, call the Chillicothe Public Library at 309-274-2719 or visit its web page at www.chillicothepubliclibrary.org.