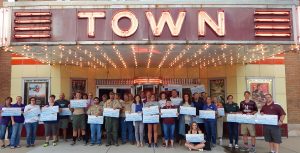 A movie and popcorn is more than just a date night in Chillicothe. It’s also an opportunity to help local youth organizations.

Built in the 1920s, The Town Theatre has a unique art deco facade and is one of several  Illinois movie houses featured in the 2001 book “Popcorn Palaces,” a collection of paintings by Davis Cone.

“He made a business plan and presented it to the club with the thought that it would be our primary fundraiser for the support of youth, which is what the Optimist Club is all about,” Terpstra said.

The club was able to purchase the the theater through commercial loans, private donors and fundraising, she added.

The theater employs 12 to 15 part-time hourly workers, including a manager, and relies on Optimist Club and Theatre Board members to handle maintenance and other jobs on a volunteer basis.

“The other board members assist with anything else that comes up, such as staffing a daytime showing for a local school field trip or helping to serve hot chocolate and popcorn at our annual Polar Express pajama party,” Terpstra said. 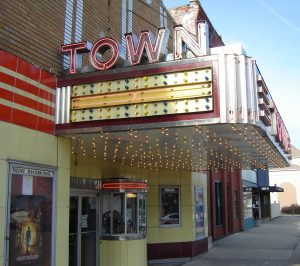 The Chillicothe Town Theatre is owned by the town’s Optimist Club, which has shared $60,000 in proceeds from the operation with area youth organizations since 2010. The organizations are simply asked to encourage their members to patronize the theater.

Community businesses also partner with the theater to underwrite the cost of offering discounted tickets for certain events while other businesses pay to advertise on the big screen prior to movies. The Theatre Board purposely tries to keep ticket prices low at $6 for adults and $5 for children and seniors for the two-screen theater.

“Attendance at the theater in 2017 was just over 15,000,” Terpstra said. “This is down from about 18,000 a few years ago. We would love to see more people, particularly when we have movies here for two weeks and the attendance trickles. But the movie industry as a whole is struggling with attendance. People are streaming and waiting for it instead of going to the big screen anymore.”

The theater is considered first-run, but because movie distributors sometimes have attendance requirements or require the movie to be shown on a theater’s largest screen, the Town Theatre will sometimes be showing a first-run movie in its larger theater and a movie that’s on its second or third week of distribution in its smaller theater. The larger theater seats about 115, while the smaller one seats just under 100.

Local youth groups that benefit from the theater help out by promoting the theater to its members.

“We don’t ask anything from them other than that they encourage their supporters to make the Chillicothe Town Theatre their first choice to watch a movie. Because if nobody comes to the theater, then we don’t have any proceeds to share,” Terpstra said.

Each group is assigned a number and instructed to have their members write that number on the back of their ticket stub, which they turn in when attending a movie.

“So the amount they get depends on how many people have turned in a ticket stub with their group’s number on it,” Terpstra said. “We have some groups that only get 50 supporters across the year to come in, and we have some that get 10 times that number. So there’s quite a variety in the size of the checks.” 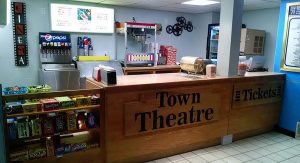 The proceeds are handed out annually in late August at an event at the theater. “We give them a big oversize check and call them up front and recognize them. We ask them to bring some of the kids and tell us what they plan to do with the money that they’ve earned,” Terpstra said.

Laura Sniff, who with her husband owns a nonprofit working farm in Chillicothe that offers field trips for special needs kids and adults, called the Town Theatre “a blessing for our community.”

“It is quite incredible how many community organizations they help,” Sniff said. “Our family and friends try to patronize the theater as much as possible.”

The Sniffs’ Blue Ridge Community Farm is using funds from the theater to support educational field trips with special education students from Chillicothe and surrounding areas.

While the Town Theatre is small, the Optimist Club has worked hard to make improvements over the years. The seats were replaced in 2010 and the theater has switched over to digital sound and picture. The concessions area was revamped last year. Board member Dennis Fraikes, a woodworker and IVC teacher, voluntarily built a new wooden counter, and the soda, ice and popcorn machines were replaced.

The theater has showings at 6 p.m. Tuesday through Sunday, a 2 p.m. matinee on Saturday and Sunday and an additional show at 8:30 p.m. on Friday and Saturday. Weekday matinees are added in the summer. Tuesdays are free popcorn night, and the theater is closed on Mondays.

The public can sign up for text alerts for upcoming movies and showtimes by texting “chilliflix” to 41411 or by signing up on the website at www.chillicothetowntheatre.com.