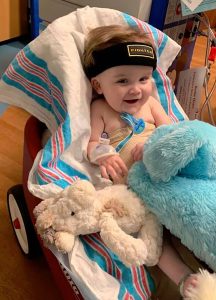 Kelsey Bastian of Chillicothe kisses her son Wally before the smiling 14-month-old went to surgery Feb. 28 to receive a heart transplant at a Chicago hospital in a 12-hour operation. The Chillicothe community has rallied around Wally, who has and will continue to have Barth Syndrome, a very rare condition that can cause heart issues, increased risk for infection and feeding issues. (Photo courtesy of the Bastian family)

A little boy who needed a new heart in a Chicago hospital has captured the heart of his Chillicothe hometown.

Fourteen-month-old Walter “Wally” Bastian battles a rare disorder called Barth Syndrome and has been a patient at Lurie Children’s Hospital in Chicago since he was life-flighted there from Peoria’s OSF Saint Francis Medical Center on Jan. 16.

After 41 days on the transplant list, Wally received a new heart in a 12-hour surgery on Feb. 28.

“There are no words that can express how this moment felt. Seeing and kissing my baby….putting my hand over his heart and feeling it beat,” Wally’s mom, Kelsey, wrote on the family’s Wonderful Wally Facebook page the morning after the transplant.

The support of family, friends and the Chillicothe community, which has rallied around them with fundraisers and encouraging posts on their Facebook page, are helping  the little boy’s parents, Kelsey and A.J., get through the scary health crisis.

“Never in my wildest dreams did I ever think that we’d have so much support and love and prayers. We thank God every day,” Kelsey said in a phone interview from Chicago before the transplant. “I just feel like it’s all Wally. He just has a way of bringing people together. We are really truly humbled.”

Kelsey, a nurse, and A.J., a Chillicothe police officer, have health insurance but it won’t come close to covering all of Wally’s medical care, so a GoFundMe campaign has been set up for the family, raising more than $18,000 so far.

Local restaurants, including Lucky Dogs, Castaways, the Pizza Peel and El Molcajete, have hosted fundraisers and the Chillicothe Police Department is selling “Wonderful Wally” wristbands to help the family. Double A’s Sports Bar and Grill will host a fundraiser on March 13.

“I took a leave from work, and A.J. broke his ankle when Wally was at OSF, so he’s been on short-term disability, but he’ll go back to work March 7,” said Kelsey, who’s worked in the postpartum department at Unity Point Health-Methodist and is on staff as a nurse for Peoria Public Schools.

The Bastians had never heard of Barth Syndrome before Wally was diagnosed with it at eight weeks old in February 2018. The disease is so rare that it only affects about 200 people in the world, almost exclusively males.

“I found out I was a carrier once we found out Wally had Barth’s,” Kelsey said. Because the syndrome had never surfaced in her large extended family before, doctors think Kelsey’s body mutated the gene on its own. “It can cause heart issues, it can cause risk for infection and it can cause feeding issues. It can cause problems with every system 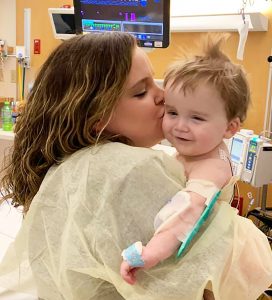 Kelsey Bastian of Chillicothe kisses her son Wally before the smiling 14-month-old went to surgery Feb. 28 to receive a heart transplant at a Chicago hospital in a 12-hour operation. The Chillicothe community has rallied around Wally, who has and will continue to have Barth Syndrome, a very rare condition that can cause heart issues, increased risk for infection and feeding issues. (Photo courtesy of the Bastian family)

The disease was discovered through genetic testing after Wally caught RSV, a very contagious virus that infects the respiratory tract of most children before their second birthday, and then was found to be in heart failure.

“We lost our first son, Henry, to heart failure after birth (in 2015) but no one could ever tell us why,” Kelsey said. “We don’t have it confirmed, but Henry most likely had Barth’s, too.”

The Bastians took Wally to the Kennedy Krieger Institute’s Barth Syndrome Clinic in Baltimore, Md., the only clinic in the world that specializes in the disease, in November.

“His heart function was great, and everything was fine then,” Kelsey said. “Then in late December, he caught some virus, they think, and it just went after his heart. We were hoping they could change a couple of his heart meds and his heart would recover after the infection was gone, but his heart wasn’t getting any better.”

In Chicago Wally underwent two heart surgeries and received an artificial heart before a donor heart was found.

The heart transplant will not cure the Barth Syndrome, so Wally will still be at risk for infection, feeding issues and low muscle tone, Kelsey said.

“There’s no cure for Barth Syndrome right now, but the Barth Foundation is working really hard to find a cure for our boys,” she added.

The Barth Foundation holds a conference every two years, which the Bastians attended last summer in Florida. “We met a lot of the families, who come from all over the world,” Kelsey said. “Wally was the youngest at the conference, and the oldest was in his 30s, I think.”

Kelsey’s voice lifts when she describes Wally. “He is very feisty,” she said with a happy laugh. “He is stubborn and strong-willed but so lovable. This kid just blows me away with his strength. Even when in pain, he smiles. He doesn’t let anything stop him or slow him down.” 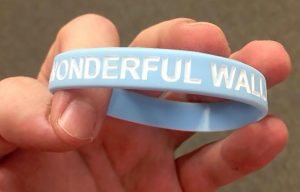 The Chillicothe Police Department is selling wristbands like this one for $3 to help raise money and support for Kelsey and A.J. Bastian, whose 14-month-old son Wally battles the very rare Barth Syndrome and received a new heart last

Wally loves pop-up books, music, toys with lights and Mickey Mouse. “He loves it when he’s the center of attention and he has an audience,” Kelsey said.

While the Bastians are thankful for the prayers and support they’ve received, they also hope Wally’s story will get people thinking about and talking about organ donation.

“Before Wally, I had never really thought twice about organ donation, although I am an organ donor. People need to start having that conversation because for kids like Wally, their lives depend on it,” Kelsey said.

Wristbands can be purchased for $3 at the Chillicothe Police Department. The department also has created a web page with a list of legitimate fundraisers at www.chillicothepd.org/wonderfulwally. Anyone wishing to host a fundraiser should contact Sgt. Nick Bridges at nbridges@chillicothepd.org to request approval.

Cards of encouragement may be sent to the Bastians at the Ronald McDonald House, 211 E. Grand Ave., Chicago, IL 60611.

“We don’t always get to respond to all the messages we receive, but it really does motivate us to keep going,” Kelsey said. “We take every day one step at a time, one breath at a time. All the support is literally getting us through.”