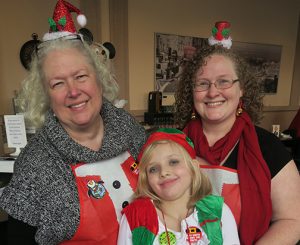 Happy Thought Coffee owner Sarah Williamson (left) poses with her daughter, Jenny Block, and granddaughter, Ella, at a previous Santa’s Brunch event at her Chillicothe cafe. Williamson offers the free brunch every year, as well as a free Thanksgiving dinner, which will be carryout and delivery only this year due to her impending knee surgery. (Photo courtesy of Sarah Williamson)

After 10 years of providing a Thanksgiving dinner to folks who could use a meal and/or company, Sarah Williamson was not about to let a knee problem cancel everything this year.

Faced with impending surgery, the owner of Happy Thought Coffee in Chillicothe is scaling back her usual plan of hosting a free buffet-style turkey-and-stuffing dinner at her restaurant,. But she’s still going to provide a carryout or delivery meal to anyone who can use one on Thanksgiving Day.

“My surgery’s not scheduled yet, but I’m just not up to doing the full sit-down meal this year,” Williamson said. “So we decided the more practical thing to do is to prepare the meal for folks to come pick up to take home or, if they can’t get out, we’ll deliver it to them (in Chillicothe).”

Preparing a full Thanksgiving meal for the community will still be a lot of work, but Williamson, 65, said, “It’s not the same as cleaning up after everybody and doing all the dishes. When it goes out the door, we’re done with it.”

People need to phone ahead to request a meal or arrange delivery so Williamson and her helpers will be sure to have enough food. Anyone can request a carryout dinner from the restaurant on Second Street, but deliveries will only be made within Chillicothe.

Williamson said she’s been fielding calls already but isn’t sure yet how many meals she’ll end up preparing this year. “We generally will serve between 50 to 75 people or even 95. I don’t think we’ve ever had more than 100,” she said.

She usually roasts five turkeys with help from her daughter, Jenny Block, and her daughter’s mother-in-law, Kath Block. Family friends Dick and Sarah Nudd also help with the meal prep. Friend Bill Dwyer has always been the unofficial door greeter. “He’s getting his meal to go this year,” Williamson said with a chuckle.

The meal will consist of turkey, mashed potatoes and gravy, sweet potatoes, green bean casserole, celery
“I usually make about 12 pumpkin pies,” Williamson said. Other varieties may include apple, chocolate pecan or whatever she happens to have in the pie case that day.

Deliveries this year will be made by Williamson’s husband, Wes, and grandson, Ryan; the Nudds; and other family members. Darlene Kumpf, president of the Community Needs Agency in Chillicothe has also volunteered to help with deliveries. The agency is partnering with Williamson this year to help offset the cost of preparing the meals.

“I believe there certainly is a need for such a program, especially for those who are homebound and/or have no family in the area,” Kumpf said. “Community Needs Agency’s purpose is to connect local residents with needed social service programs available in the Chillicothe area and to act as an advocate on behalf of senior citizens and those who need a little assistance from time to time. We are grateful to Sarah, her family and the staff of Happy Thought Coffee for providing this long-time tradition of offering a Thanksgiving dinner to those who might not have one.”

Theresa Meister, CNA executive director, added that people reach out to the agency every year seeking Thanksgiving baskets. “Sadly, I tell them we only give out Christmas holiday baskets, but for the past few years CNA has directed people to Happy Thought Coffee for more information or to make a reservation for dinner. There are many hungry people living in the Chillicothe area that will have something special to be thankful for this coming Thanksgiving day,” she said.

Williamson was inspired to start offering the holiday meals in 2008 by her late father, Bill Gillen.

“One of the things my dad always did that I thought was neat was on Thanksgiving before he’d come to my house he’d go to Sadie’s Cafe in Peoria, which was known for giving away free Thanksgiving dinners, and hand her a $20 bill and say, ‘I hope this helps you feed some of these folks.’ ” Williamson said.

After losing both her parents within two months of each other in 2008, Williamson knew Thanksgiving might be a difficult day without them. “So I thought about what my dad had done and decided we would offer Thanksgiving meals here,” she recalled.

She didn’t necessarily plan to make it an annual thing, but it seemed to make people happy, so she kept it going.

“There’s a part of me that wishes we could do it the same way this year, but I have to be smart and realistic,” Williamson said, adding that she’s not sure yet what she’ll do next year.

While she doesn’t ask for or expect donations, some people give anyway.

Any money she’s received during past Thanksgivings has been put toward an annual Santa’s Brunch that she offers free-of-charge to area children. This year she’s received a donation toward the Christmas event from Sue and Don Hoffman in honor of Sue’s mother, Mary Jane Braun, who died in October 2017. Braun was known for baking angel food birthday cakes and and is estimated to have hand-delivered about 6,000 of them to family and friends in the Chillicothe area over the past 20 years.

Santa’s Brunch will be held on Dec. 8 and pre-registration is required. Children will visit with Santa, decorate a cookie, make a Christmas ornament and receive a goody bag and a present from Santa’s bag.

Thanksgiving meals can be picked up at Happy Thought Coffee, located inside a historic 1868 bank building at at 953 N. Second St, between 1 and 3 p.m.

For more information or to reserve a meal for carry-out or delivery or to make a reservation for Santa’s Brunch, call the cafe at (309) 274-6623. Cafe hours are 6 a.m. to 5 p.m. Tuesdays through Fridays and 7 a.m. to 4 p.m. Saturdays. The cafe is closed Sundays and Mondays.