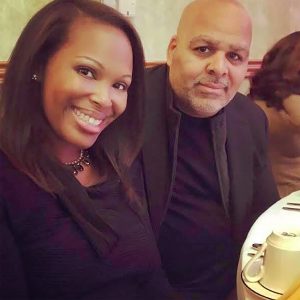 Two Peoria artists are working on developing a community arts center at a former school building, but they need the public’s help.

Jonathon and Nikki Romain bought the long-closed Greeley School located at 919 NE Jefferson Ave. for $30,000 earlier this year. They were the only bidders on the property, which Peoria Public Schools had previously tried to sell for $120,000.

The Romains hope to turn the school into affordable studio space for artists who would then volunteer their time to teach free after-school and weekend art classes for children and adults in the community.

“The idea of having an art center of some sort actually came to me about 10 years ago, and I never really acted on it for various reasons. Then when I stumbled onto the old Greeley School it resurrected itself, and I’ve just been moving forward on that since then,” said Jonathon Romain.

The couple have started a nonprofit organization for the community arts center called Artists ReEnvisioning Tomorrow (ART Inc.) and are hoping to raise $150,000 through YouCaring crowdfunding to help with the project. The campaign has raised more than $26,000 since launching in mid-March.

The Romains are also hosting an informational “Call to Artists” meeting from 3 to 5 p.m. Sunday, May 6, at Jonathon’s current studio at 1919 N. Sheridan Road.

“We absolutely hope to have all types of artists involved,” Nikki said. “We think of visual and performing arts, but there’s also language arts, graphic arts and others.” 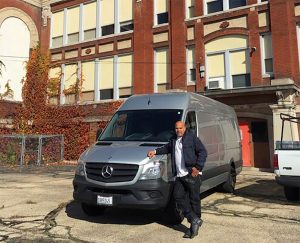 Jonathon envisions the center providing life-building skills as well, such as teaching kids about basic electricity or how to change a tire.

“Just things that a lot of these young people don’t have access to growing up in the type of environment they grow up in,” he said. “We want to be able to provide that for as many as we can with the resources that we have. I definitely don’t want to overstate it because we’re artists. We’re not rich. But we have decided we want to dedicate our lives to making someone else’s life better.”

Growing up on Chicago’s West Side, Jonathon Romain knows how a program like the one he envisions in Peoria can help kids who are struggling. Although his high school grades were poor, Romain managed to do well at a junior college and was accepted to Bradley University, where he majored in psychology.

Just before graduating from Bradley in 1990, however, Romain was arrested and convicted of selling drugs. He spent seven years in prison, where he developed his artistic skills.

Romain has since built a successful career as an artist, operating a gallery in Chicago for a time before moving back to Peoria and was even commissioned to paint a portrait of former President Bill Clinton.

Asked if a program like the one he and his wife are proposing in Peoria might have helped change the path that led him to prison, Jonathon said, “I’ve been telling people that for 20 years. I know it would have.” 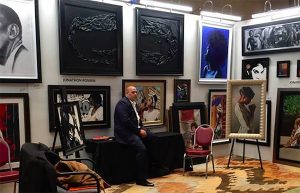 Peoria artist Jonathon Romain sits with his artwork at a gallery showing in New York in February. Romain has built a successful career as an artist and wants to help underprivileged kids by turning an old Peoria school building into a community arts center. (Photo courtesy of Jonathon Romain)

He added, “I’m not under any illusion that we’re going to come in and change the face of Peoria overnight because we have the magic potion. But I do think we will be providing something to the community that will save some lives. There’s no doubt in my mind about that.”

Nikki Romain also grew up in Chicago, where she was active in theater in high school and later majored in it at Columbia College Chicago. “It definitely helped me out on my path as well,” she said. Nikki is currently focusing on raising the couple’s 2-year-old daughter but said she would likely help teach classes at the community art center.

Renovations to the 45,000-square-foot building will include updating the boiler system and making the facility handicapped accessible.

The Romains hope to have the center up and running by next summer, but also have another obstacle to overcome first.

The Peoria Planning and Zoning Commission will hold a public hearing on the couple’s request for a special use permit to turn the former school into a community art center at 1 p.m. May 3 in room 400 at City Hall.

A potential issue is that their plans to hold youth classes at the building would impact a nearby halfway house operated by the Human Service Center because state law prohibits some of the residents—such as convicted sex offenders—from living within 500 feet of a school, park or daycare center.

“If we prevail we’ll move forward as we have laid the plans out thus far,” Jonathon said. “If we don’t prevail we’ll have to tweak our plans. Whichever way it goes, it’s nothing that we can’t overcome. I’ve overcome a lot more complicated things than this.”

Other options might include holding off-site programs for kids under 18 and working with Peoria Public Schools to have artists go into the district.

“I would like to stress that if anybody is interested in making sure that this community arts center will become a reality, they should come out to the May 3 public hearing,” Jonathon said.

For more information or to donate, visit www.youcaring.com/artinc-1120016 or the ART Inc. Facebook page at www.facebook.com/pg/artincpeoria.