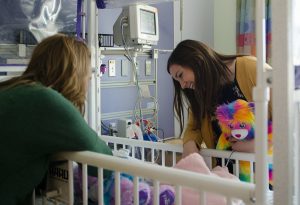 Cuddles for Kids founder Taylor Larson (right) holds a stuffed animal while leaning over the crib of Noel Layhew at OSF HealthCare Children’s Hospital of Illinois with Layhew’s mother, Christine. The college sophomore collects thousands of stuffed animals yearly through the nonprofit she started after being gifted a teddy bear when she was a young patient at the hospital. (Photo courtesy of Cuddles for Kids)

College sophomore Taylor Larson knows what it’s like to be a scared little kid in the hospital and how much something as simple as a stuffed bear can help.

“When I was 8 years old, I was a patient at OSF Children’s Hospital for a ruptured appendix. I was there for almost three weeks, and while I was there I got a stuffed animal from a radio station. It was something to hold on to in the moments when I was scared, and for a little kid that meant a lot,” said Larson, who still has that teddy bear that she named Heart.

Once she was on the road to recovery, Larson decided to give back in a big way that started fairly small.

“After I got out of the hospital, I started collecting stuffed animals to help other kids. It originally started with my third-grade class, and I collected 30 bears,” she  recalled.

From that first act of charity grew Cuddles for Kids, which officially became a nonprofit organization in 2017 and now helps about 5,000 children every year.

“We’ve collected a total of 14,800 bears over the years,” Larson said. “With our big annual drive happening in January, I’m guessing we’ll break that 15,000 mark, so that will be exciting.”

The kick-off for Cuddles for Kids’ 2020 drive began this week and will run through Feb. 7. More than 70 drop-off locations for donations of new-with-tags stuffed animals are located  throughout central Illinois, including Peoria, Pekin, East Peoria, Chillicothe, Farmington and Starke County. A complete list of drop-off locations will be  listed  on the group’s Facebook page and website at www.cuddlesforkidshugs.org.

“We collect any kind of stuffed animal, as long as its new with tags still attached.  A lot of the kids we serve have compromised immune systems, so we try to keep them as clean and germ-free as we can,” Larson said.

As the donations come in, Larson and Cuddles for Kids board members will stockpile them–mostly at Larsons’ parents’ house in Chillicothe—until they deliver them to OSF HealthCare Children’s Hospital of Illinois on Valentine’s Day.

“My mom is very gracious and pretty much gives up her entire house during January,” Larson said with a chuckle.

Larson’s parents, Bill and Carol, serve on the Cuddles for Kids board of directors, along with her older sisters, Erica Larson and Ashley Larson Fady. Other board members are Tonya Pape and Leanne Howald.

“We deliver the stuffed animals personally. We’ll go to each kid’s room and hand them out,” Larson said, adding that the hospital stores the extras not delivered that day and gives one to every child admitted to the hospital after that until they run out.

“The sad part is we donate them in February and a lot of times they’re already out of them by the middle of summer,” Larson said. The group hosts an event with the Peoria Chiefs in the summer and a Cuddles for Kids birthday pool party in August to try to restock the supply.

Cuddles for Kids has also donated stuffed animals to St. John’s Children’s Hospital in Springfield, Unity Point-Methodist and, most recently, to the new Ronald McDonald House in Peoria. The majority of the 140 stuffed animals that were donated to the Ronald McDonald House came from a collection by Chillicothe’s Cops and Kids program during the recent Christmas parade. 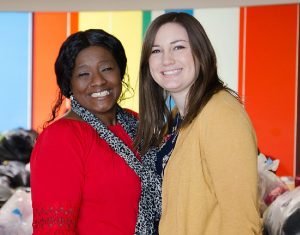 Cuddles for Kids founder Taylor Larson (right) stands with Demetra Gaines, Child Life special visitors coordinator at OSF HealthCare Children’s Hospital of Illinois. The two first met when Larson was an 8-year-old patient at the hospital, and now Gaines helps Larson facilitate the donation of thousands of stuffed animals each year to help frightened children through the non-profit Larson started after she recovered from her illness. (Photo courtesy of Cuddles for Kids)

In the fall, Cuddles for Kids hosts a Sleep Tight project that collects stuffed animals, blankets, books and hygiene items that are assembled in bags for children who are homeless or in foster care.

When she started Cuddles for Kids at 8 years old, Larson didn’t envision how large it would grow but she understood even at that young age the power a soft cuddly toy can have for a frightened child.

“I think one of the biggest things for me was when I had to go into my second surgery,” she said. “I was freaked out because I had gone to surgery once already and kind of knew what was going to happen. My parents couldn’t come with me, but the nurses made a big deal about making sure my teddy bear could go with me, and when I woke up later, they made sure he was still with me.”

Demetra Gaines, child life special visitors coordinator, has been at the Children’s Hospital for 30 years and has seen the impact stuffed animals can have. She was there when Larson got her teddy bear and now helps facilitate the delivery of stuffed animals by Cuddles for Kids.

“It’s like a buddy for those kids, so they’re not as scared,” Gaines said.

Child Life specialists can also used the stuffed animals to help explain a procedure the child might need or as a way for kids to be able to talk about their emotions, Larson noted.

“Sometimes you forget the impact that those things have on patients,” Gaines said. “Last year we had a total of over 6,000 stuffed animals. People might think that’s a large number, but we still run out of them because we see so many patients and we try to give one to every kid that comes into the hospital no matter what they’re going through, whether it’s a surgical procedure or if it’s outpatient.”

Gaines said she was not completely surprised when Larson started Cuddles for Kids. “She’s just one of those exceptional, caring types of people. I always tell her she has an old soul,” Gaines said.

Now a pre-nursing student at Illinois Central College, Larson said she wants to keep growing Cuddles for Kids. “I want to keep growing and expanding, because that just means more smiles that we can provide to even more kids,” she said.

For more information on how to donate stuffed animals or money, visit the Cuddles for Kids Facebook page or website at www.cuddlesforkidshugs.org.