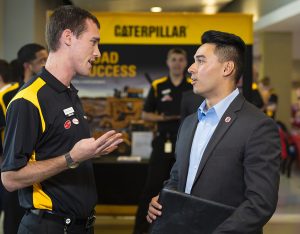 Looking for a new job can be daunting in the best of times and downright scary during an unprecedented pandemic, but some job experts say there are reasons to stay optimistic, particularly for those just entering the job market.

“The outlook for recent college graduates is much more positive from my perspective than for everyone else in the economy, and a lot of that has to do with the lessons that were learned by employers from the 2008-09 economic downturn,” said Jon Neidy, executive director of Bradley University’s Smith Career Center.

After rescinding offers during the last recession, companies realized they not only damaged their reputations on college campuses as students talked about their experiences, but they also created a hole in their talent pipeline, Neidy said.

“With all the baby boomers retiring–which may not happen right now–there has to be a pool of talent to take over those roles, and some of the companies that we work with openly admitted four to five years after the recession that they had gaps in their talent pool as a result of not doing the hiring at that point,” he added.

So far only about 5 to 6 percent of recent Bradley graduates have had full-time job offers rescinded due to the pandemic. “That’s within acceptable limits given everything that’s going on in the world,” Neidy said.

Older folks looking for work may also have more luck landing a job than the rapidly rising unemployment numbers might indicate, according to a talent mobility executive who took part in a recent webinar for AARP.

“The national outlook on jobs is actually not as bad as people might think,” said Andrea Grant, senior vice president of business development for Lee Hecht Harrison.

“The jobs themselves that people are looking to fill range from transportation and logistics to finance and accounting, IT, certain sales and management positions and even back office support. And, of course, health care,” she said.

Bradley’s Neidy noted that segments of the health care industry are hiring, while other segments are actually reducing staff during the pandemic. Other industries that are still hiring include supply chain manufacturing and transportation, retail services and virtual space, according to Neidy.

“Think about the ways we’re using technology right now that we weren’t before and the number of people it takes to support that kind of technology. Those are fields that are definitely expanding,” he said.

Recent graduates are advised to stay flexible as they hunt for jobs. “You may have thought all along that you’d go into hospitality, but maybe now you should go into grocery stores, because companies are still hiring in that space,” he said. 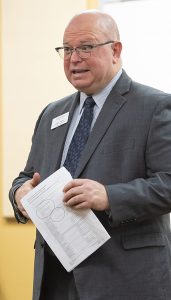 Another tip for recent graduates or others looking for work is to spend downtime  gaining new skills.

“Spend two weeks learning something online that you didn’t anticipate needing to learn but that might look really great on your resume as a certificate, such as social media or web coding,” Neidy said.

He pointed to the Fast Company’s website at www.fastcompany.com as a resource for ways to learn new skills for free during the COVID-19 crisis.

Learning new skills or identifying transferable skills is a topic that comes up even without a global pandemic, said Andrea Grant.

“Everybody has probably heard about or will hear about up-skilling or re-skilling. This is going to be critical not just for the jobs of today but the jobs of tomorrow,” she added. Transferable skills necessary to change careers include technical, communication, critical thinking, multi-tasking, teamwork, creativity and leadership.

Grant also suggested General Assembly, a private for-profit education organization, as a resource for finding both paid and free online classes, as well as community colleges and even online websites for institutions such as Harvard University and NASA.

Other advice for job hunters include networking, practicing and being prepared for virtual interviews and tailoring your resumé, cover letter and experience to fit the job.

“This is not the time to be submitting the generic resumé or generic cover letter. It’s really a time to take time to set yourself apart from all the other candidates,” Neidy said.

For those who have a job and are now working from home, Neidy said it’s important to stay focused and go above and beyond what’s required whenever possible.

“It’s OK to feel sad and feel like the world is changing and things are rough, but when you’re engaging online with your colleagues and your supervisors, try to be as positive as you possibly can be,” he said.

Virginia Girsch, a 2020 Bradley graduate in nutrition and dietetics, feels lucky to be heading to the University of Iowa for graduate school, though the pandemic may affect her clinical rotations at the hospital if there isn’t enough personal protection equipment or if limits are placed on the number of people who can be there at one time.

“Right now grad school is scheduled to be in person and everything will be normal, but if worse comes to worse, we will have to go online,” said the Chillicothe native.

Girsch already has been hired at the University of Iowa Hospital in the dietary department, a process that was completed early online since her supervisors worried the pandemic might cause a hiring freeze later in the summer.

“I’m very glad they did this early hiring because it was something I was concerned about. I work in a similar position now at OSF and we’re on a low staff, so a lot of people had to go on furlough for a couple of months,” she said.