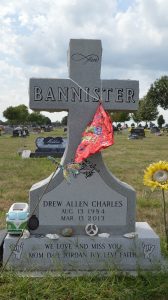 The nonprofit group Drew’s Plots has purchased burial plots in the Chillicothe City Cemetery where their son, Drew, is buried, as well as plots in Peoria and Lewistown to help other families who are faced with burying a loved one. (Photo by Elise Zwicky)

With the fast approach of the annual fundraiser that helps them aid people facing unexpected funeral expenses, Brad and Robin Bannister watched in fear as the number of COVID-19 cases continued to rise.

“It’s a weird time, that’s for sure,” said Robin, summing up a sentiment felt around the world as the novel coronavirus pandemic continues to upend normal life for nearly everyone.

Like other event planners in the country, the Bannisters were forced to cancel what would have been the seventh annual Spring Loose fundraiser on April 4 to benefit their Chillicothe-based nonprofit charity, Drew’s Plots.

After first trying to reschedule the day-long event for later in the summer, the couple began to worry that the pandemic might continue through July or August.

“And there also are people who are losing wages during this time and are maybe going to have trouble getting back on their feet by the time things snap back, so I just don’t know if it would be a good thing to be asking them for money to help others at that time,” said Robin, whose own livelihood as a dental assistant has been affected by the coronavirus crisis.

“So we’ve locked it in for next year on April 17 at Three Sisters Park,” Brad said. “It’s a little bit disappointing, but we do have a couple of local supporters that I think will still come through with donations that will hopefully help us make it until next year’s Spring Loose.”

The Bannisters formed Drew’s Plots in memory of their son, Drew Bannister, who was 28 when he died in a car accident in 2013 in Florida. After an anonymous donor unexpectedly paid for their son’s burial plot at that difficult time in their lives, the family felt called to do the same for others.

Initially, the nonprofit organization purchased plots near where their son is buried in the Chillicothe City Cemetery, but they now also have plots in three cemeteries in Peoria, one in Lewistown and they may soon have a few in Kewanee.

Drew’s Plots helps people facing unexpected funeral expenses from all over central Illinois on a case-by-case basis. Since it was incorporated, the organization has helped 80 families bury loved ones ranging in age from a 6-day-old baby to an 80-year-old grandmother.

“To me, that number’s not important but a lot of people like to know,” Brad said. “You can’t help in every situation; you never can. But we work to the best of our ability to help people that are truly in need and have no means to do what they have to do.”

As of late March when Illinois Gov. J.B. Pritzker issued a stay-at-home order for the entire state through at least April 7 to try to slow the spread of the coronavirus, the Bannisters didn’t have any families that currently needed help.

“Just a week or two ago we helped (two families) by doing what we could, but right now there’s nobody that needs our help. But it can be quiet for four or five days and then we might get three calls from three different angles. We just never know,” Brad said. 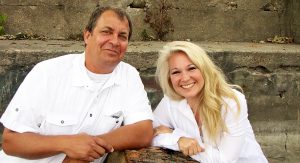 Brad and Robin Bannister created the nonprofit Drew’s Plots in Chillicothe to help others with burial costs after an anonymous donor paid for their oldest son Drew’s burial plot when he died in 2013. The coronavirus pandemic has forced the cancelation of the organization’s annual fundraiser, but they hope to still be able to help some families in need. (Photo courtesy of the Bannister family)

“We’ll just have to wait and see how it all happens,” he added. “God’s in it, so maybe he’s not going to send us as many people that need help this year. That’s what we can hope for.”

Robin agreed. “It’s the Lord’s ministry, and he’ll provide what we need. We’ll figure it out,” she said.

Since the beginning, the family has found inspiration in a Bible verse, Galatians 6:2, which states: “Bear ye one another’s burdens and so fulfill the law of Christ.”

Just before Pritzker’s stay-at-home order was announced, Brad reached out to a local U-Haul representative in anticipation of what was coming as the number of virus cases in Illinois continued to rise. The company offered Drew’s Plots a storage unit at no cost for six months to store all the items the Bannisters had been gathering for this year’s Spring Loose fundraiser.

Among items being stored are fishing poles and furniture that had been donated as raffle prizes for the fundraiser. Meanwhile, Robin has been returning gift certificates local businesses had donated for a raffle.

“Most of the certificates usually expire within a year anyway, and some of those businesses are going to be struggling with this big shutdown,” she said.

For anyone who’s able to help currently, the organization would appreciate donations, which are tax-deductible. “Any cash donations go straight into the account and  are distributed as needed when families call,” Brad said.

Raffle items can also be donated since they can be put in the storage unit until next year, he added.

The Bannisters are considering holding a smaller fundraising event in the fall if life is back to normal by then.

“Chillicothe is known for their support of their community and their people. They come together when people are hurting. we’ve seen that over and over again,” Robin said. “I would just ask people to have faith.”

Thinking about what their notoriously laid-back son, Drew, would have said about the current crisis, Robin smiled and said, “He would tell everyone to get their fishing pole and come fishing with him.”

For more information about Drew’s Plots or to make an online donation, visit the website www.drewsplots.com. Checks made out to Drew’s Plots, Inc., can also be mailed to 15211 N. River Beach Drive, Chillicothe, IL  61523.