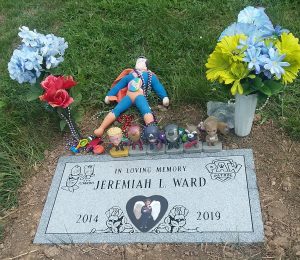 : On Aug. 29, a marker was placed on the grave of Jeremiah L. Ward, Peoria’s youngest shooting victim this year. The four-year-old was killed May 13 when he was caught in the crossfire of an ambush-style shooting. He was Peoria 10th homicide. (Photo by Holly Eaton / For Chronicle Media)

It may seem like gun violence is a trend on the upswing in Peoria.

But to those on the inside, gun violence is a cultural legacy, handed down to the young and impressionable by violent role models.

“A Time magazine article in the early 90s said we would lose a generation or more of young men to violence, because we didn’t have the tools in place to change the course,” said Bobby Ford, treasurer for Peoria Community Against Violence.

“There was a lot of gang activity, no father figures, incarceration, and we didn’t have anything in place then,” he said. “Even now, it’s a status symbol to go to jail, and we have young men who, unfortunately, think it’s a status to die.”

At the end of July, the Peoria Police Department reported a 17% increase in murders this year, mostly from gun violence. At the end of 2018, the city tallied 12 homicides. Year-to-date, 18 people were murdered, including 4-year-old Jeremiah Ward, who was caught in the crossfire of a May 13 drive-by shooting.

A spate of shootings erupted hours after Ward died that nigh. One was in Peoria’s East Bluff neighborhood,  where there’s been an upsurge of gun violence. At a recent East Bluff policing meeting, Peoria Police Assistant Chief Michael Mushinsky told residents that most of the perpetrators are teenagers.

Gun confiscations are on the rise this year. So far, 250 weapons have been seized, with only 38 more to go before reaching last year’s total. Peoria Police Department Crime Analyst Jacob Moushon said most of the guns are stolen or acquired through “straw purchases” — guns bought legally by Firearms Identification Card Owners who sell them on the street.

Moushon also said the days of name-brand gangs, like the Gangster Disciples, are gone. In their place are simply groups that people migrate to and from without loyalty. Connections and rivalries, he said, are usually made through Facebook and text messaging.

“We’re working on focused deterrence, and look for the most violent offenders,” Moushon said. “We try to document who they’re stopped with and ID people. All the sudden, you have a history of those people, where they live, where they hang out.”

It’s profiling with a purpose, as opposed to the unfounded racial profiling which has gone on in the past. Ford serves on the Peoria Community Police Relations Commission that was established in 2012.

“There was a high rate of African-Americans being profiled, for loud music, anything to get them pulled over,” Ford said. “There is a lot less profiling now. The community police relations are really improving in the Peoria area, a lot of different organizations that are bringing the community together with the city and sheriff.”

“Brian is working on recidivism in Peoria and, amazingly, it’s starting to work. Individuals are coming out of being incarcerated and working and returning to society,” Ford said. “People don’t have the ability to go to an interview, they’ve never had that kind of experience, somebody’s got to give them the opportunity to make $17-18 per hour.”

Felons, have also begun mentoring youths, Ford said, yet another example of opportunities for “young men to change the trajectory in our community,” by targeting youths before they become offenders, by reaching them at the middle school level.

“We have to get to them before they become teenagers, when it’s more difficult to reach them,” he said. “Somebody’s got to tell them they can do something different, give them a different role model than a gang member who’s been shot.”

Many of the kids in that target audience come from good environment, with working parents, but the trauma of living in a high-risk neighborhood, and witnessing violent crimes can also influence the choices young people will make.

PCAV will be at Trewyn Middle School from noon-5 p.m. on Sept. 21 for “Hopefest, Reaching Out and Grabbing Hope.” More than 20 vendors will provide health screenings and education, and State Rep. Jehan Gordon-Booth and Peoria Police Chief Loren Marion will speak on key issues.

On Sept. 27, PCAV will host “Searching for a Better Tomorrow”, where representatives from local trades, businesses and training centers will offer visitors resources and opportunities. It will run from 10 a.m.-2 p.m. at the East Bluff Community Center, 512 E. Kansas. Lunch is provided.