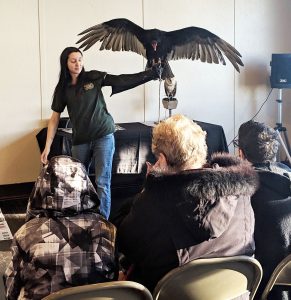 Wildlife Prairie Park staff will be on hand to show birds of prey again at this year’s Chillicothe Eagle Watch Celebration on Saturday, Feb. 8, at the Shore Acres Clubhouse. The event includes an all-you-can-eat pancake and sausage breakfast and a chance to see eagles on the Illinois River. (Photo courtesy of the Chillicothe Rotary Club)

A new high-powered, double-scope telescope at Chillicothe’s Shore Acres Park will give visitors to this year’s annual Eagle Watch Celebration a close-up view of the majestic birds and other wildlife that may be in the area.

The Chillicothe Rotary Club is hosting the all-you-can eat pancake and sausage breakfast with help from the Chillicothe Lions Club from 7:30-10:30 a.m. Saturday, Feb. 8, at the Shore Acres Clubhouse at 100 Park Blvd.

Along with the food, the celebration will feature a children’s storyteller, a presentation with live birds of prey from Wildlife Prairie Park and educational materials, spotting scopes and binoculars provided by the Audubon Society for wildlife viewing.

The Chillicothe Optimist Club spearheaded a fundraiser to purchase the new telescope, which will be installed and maintained by the Chillicothe Park District. A dedication ceremony for the telescope will take place at 11 a.m. following the breakfast.

Optimist Club member Sherry Adams said the idea for the telescope came to her during last year’s eagle celebration.

“It was kind of an overcast day and you could see eagles across the river, but you couldn’t really make them out. I thought wouldn’t it be great to have a high-powered telescope so you’d be able to see eagles and all the wildlife along the river,” she recalled.

After researching companies that make telescopes, Adams brought the idea to the Optimist Club’s board, which gave her the go-ahead to start fundraising for the $6,500 needed to purchase a telescope with an all-color-corrective optic double viewer from the Glass Eye in Signal Hill, Calif.

“I started trying to raise the money in April and my target date was mid-November to order the telescope. Three Sisters Music Festival gave us $1,000 by mid-November, and that put us over the top,” Adams said.

She also received donations from the Chillicothe Lions Club, Rotary Club, VFW Post 499, CEFCU, the Chillicothe Foundation and Owens Design group, as well as from individuals who donated through a GoFundMe account. 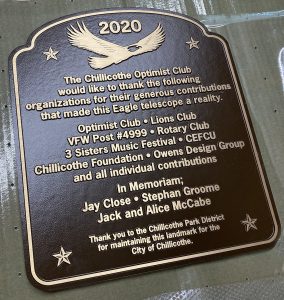 A plaque to be installed near the telescope recognizes the organizations and recognizes in memoriam four people whose families donated more than $200 each: Jay Close, Stephan Groome and Jack and Alice McCabe.

“Anyone that gave a personal donation over $200 could get the name of a loved one that has passed on the plaque,” Adams said.

The telescope is being installed on the bluff on the north side of the Shore Acres Clubhouse and will be available for use during the Eagle Watch Celebration breakfast.

“It’s designed for free use by the public,” Adams said. “It has two scopes, one higher and one lower, so an adult and a child or a person in a wheelchair could be using it at the same time.”

The telescope swings 180 degrees for complete panoramic viewing, and a camera or phone can be held up to the lens to take a close-up photo of birds or other wildlife, she added.

The Optimist Club in partnership with the Chillicothe Public Library is also holding its annual “Eagles” and “Life on the Illinois River” photo and art contest in conjunction with the eagle celebration. Contest winners will be announced at the breakfast.

Rotary Club president Diane Denekas said the Shore Acres Clubhouse, located on the Illinois River, is a perfect spot to view eagles. “It’s especially good for the kids,” she added. “It’s up-close information and viewing of something they might read about it in school.”

Illinois hosts more wintering American bald eagles than any other state besides Alaska, according to the Illinois government website www2.illinois.gov/sites/eagles/Pages/EagleWatching.aspx.

The website states that more than 3,100 bald eagles can be viewed in their natural habitat throughout the state each winter, with January and February being the prime time to see the majestic protected birds.=

Bald eagles have been found wintering throughout Illinois at various locations, including all along the Illinois River; at the Illinois and Michigan Canal and Chicago Sanitary and Ship Canal in northeast Illinois; along the Des Plaines River near Channahon State Park; and on the Fox River at the Pleasant Valley Forest Preserve in Woodstock.

In Peoria County, eagles can often be spotted near the Peoria Lock and Dam along Wesley Road, along the river near the RiverPlex in Downtown Peoria and just south of the McClugage Bridge.

The Eagle Watch Celebration is a fundraiser for both the Rotary and Lions clubs. Denekas said funds raised go to a variety of Rotary Club projects, including an event to honor National Merit Scholarship winners and to provide support for a student exchange program between the IVC school district and Germany.

Part of the funds raised during last year’s eagle breakfast went toward replacing an eagle statue carved in 2010 by local artist Tim Gill that has been deteriorating. The original sculpture was carved from a tree at Eagles Landing near the boat ramp down the river from Shore Acres. 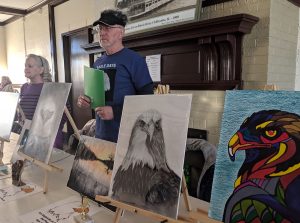 The Chillicothe Optimist Club in partnership with the Chillicothe Public Library is once again be sponsoring its annual “Eagles” and “Life on the Illinois River” photo and art contest. Winners will be announced at the Eagle Watch Celebration breakfast on Saturday, Feb. 8. (Photo courtesy of the Chillicothe Rotary Club)

When the base of the original sculpture began to deteriorate, the city cut the eagle from its base and built a concrete support structure. The Rotary Club explored ways to repair the current sculpture but determined it was beyond repair and began searching for a  sculptor to create a new one.

“We were at the Mississippi Valley Fair (in Davenport, Iowa) and we happened to come upon a carver who had done a beautiful hummingbird and flowers from a tree trunk,” Denekas said.

After being hired by the club, Gary Keenan of Altoona, Iowa, carved a majestic eagle from a large tree log. The Rotary Club donated the sculpture to the city at its Nov. 11 City Council meeting. It will be installed and dedicated in the spring.

Tickets for the Eagle Watch Celebration breakfast are available in advance from any Rotary or Lions club member and at the door at a cost of $7 for adults and $3 for children 10 and under.