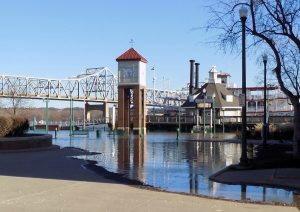 By Sunday, Feb. 25 flood waters at the foot of Water Street inundated the Spirit of Peoria dock and reached past the Riverfront Village parking area before cresting at 25.1 feet Monday afternoon. (Photo by Holly Eitenmiller / for Chronicle Media)

On Monday, flooding along the Peoria riverfront peaked at 25.1 feet, and, though the river is expected to begin the slow process of receding, that likely will be hindered by more rain.

The City of Peoria has assembled two sandbag berms; one at the foot of Water Street between the shuttered Riverfront Village and Martini’s On Water, and a second at the foot of Liberty Street, just west of Martini’s.

Assistant Director of Public Works Sie Maroon doesn’t see the need for further reinforcements, unless the region is faced with a deluge of rain. There is concern, however, for more residual flooding.

“When it rains or snows up north it just multiplies for us,” Maroon said. “When they get the flood waters, that slows our waters down from flowing into the Mississippi.”

Rains expected in the Peoria area this week and the fringes of other storms will cause more heavy rainfall in a path where flooding is at its worst.

Six deaths have been reported from the Central United States already this year from storms that produced numerous tornadoes.

“The problem is, the Illinois River is a slow responding river, slow to rise but slow to fall,” Smith said. “This rainfall we have coming in the middle of the week doesn’t look like it’ll cause significant problems, but it will slow things.”

Chicago also has expected rainfall, he said, which will also slow down river recession, and with the frost gone, the ground has become soaked.

“When the frost is gone from the ground, initially the soil is dry, but now it’s saturated and the runoff will slow river trends,” Smith added.

Though Maroon doesn’t see a tremendous cause for concern, he said flooding trends in the past decade cannot be ignored.