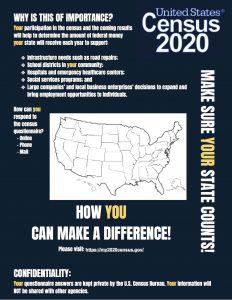 More than 35 IVC high school business and computer students created flyers like this one as part of a remote learning project to encourage Chillicothe residents to complete the census. (Photo courtesy of Deanna Shively)

Like other teachers around the state, Deanna Shively was searching for ways to create online lessons that would be meaningful for her Illinois Valley Central High School business and computer students when the nationwide pandemic forced schools to close buildings in mid-March.

“We had to shift gears when we found out we were going to be doing remote learning, and we realized we needed to do things that are authentic and real and not just busywork,” Shively said.

After brainstorming with family computer science teacher Linda Fennell and then talking with Chillicothe Economic Development Director Amanda Beadles, Shively came up with a class project that helped lead to a significant boost to the city’s 2020 census return rate.

Each student was asked to create a flyer using desktop publishing to remind and encourage people to complete the census. The students then shared their flyers on various social media platforms.

“Census numbers are critical to the health of the community,” Beadles said. “Data from the census helps community and city planning, helps the community in state and federal funding, helps provide information needed to attract new businesses and helps current businesses understand how to market. During the pandemic, census field work was delayed.”

This is the first year citizens can complete census forms online, in addition to the traditional ways of mail or phone. Historically, census workers go door-to-door during the summer to reach people who haven’t filled out their forms, but the COVID-19 pandemic this year will likely make canvassing difficult at best.

After 37 students from freshmen to seniors saturated social media with their flyers during April, the census response for Chillicothe went up from 52 percent in the first week of April to 71 percent by May 2, a 36.5 percent increase.

“We believe the students helped encourage our community to fill out the census online,” she added. “Overall, this was a great way for students to use their creative skills to help their community during this highly unusual time.”

In putting together the project parameters, Shively said she tried to tap into what students are really good at, which is social media. 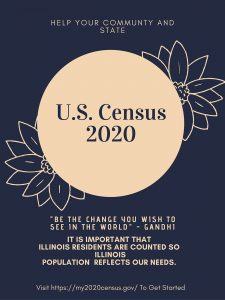 Students in Deanna Shively’s IVC business and computer classes created flyers like this one and shared them on various social media platforms as part of a remote learning project that is credited with helping to increase the Chillicothe census response rate. (Photo courtesy of Deanna Shively)

“So many times in my computer class, we’re talking about the dangers of social media. But with this, I thought: what if we harness this in a positive way so they see that they can use it for good, as well as just for their social chit-chatting?” she noted.

The computer science students typically learn desktop publishing in the classroom, but Shively had only covered a few lessons before the pandemic hit, so she told them they could use any platform they already knew and gave them links to learn others if they were so inclined. Beadles provided resources on census facts.

The students used apps such as Canva, Google Docs, Google Drawing and Pic Collage to create flyers that they sent via text, email, Facebook, Snapchat, Instagram and Messenger.

They recorded approximately 800 direct sends and received about 70 direct responses, though Shively noted that many more people likely saw the posts on platforms such as Facebook and Instagram.

“I thought it was great that students could be given some loose guidelines and create something useful and helpful  and then use the power of social media,” Shively said.

“Were they alone responsible for that increase? No probably not. However, the city of Chillicothe is running about 10 to 14 percent ahead of Illinois and the whole United States, so I’m kind of hoping a little bit of that increase had to do with them kind of hitting it out there,” she added.

Shively hopes the students learned that they can be part of a change and help others. “At a time right now when a lot of people feel helpless, they can’t cure the virus, but they did help in setting up their community for the next 10 years,” she said.

As a teacher, Shively said she learned that students are creative and don’t always need adults to show them how to do things every step of the way. “We can let them kind of run with it and see how they fly. And I think that they did a nice job,” she noted.

IVC junior Abigail Roy said she enjoyed reaching out to her community and doing her part to help. 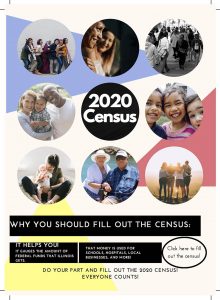 Flyers like this one created by IVC high school students as part of a remote learning project in Deanna Shively’s business and computer classes are credited in part with leading to an increase in the Chillicothe census response rate. (Photo courtesy of Deanna Shively)

“I felt accomplished and helpful after learning it may have helped increase Chillicothe’s census response rate,” she said, adding that she reached more than 300 people on Snapchat and 200 via Instagram and received 12 responses on Facebook.

As for finishing the school year online, Roy said, “It’s had its benefits, yet there are still some difficulties. I enjoy making my own schedule and working on my own passion project, (but) I miss seeing my teachers and friends. Some aspects of teaching cannot be taught through a screen, such as physics or calculus.”

Shively said while she hopes to be back in the classroom in the fall, she feels ready to teach via remote learning again if necessary.

“It was tough, I won’t lie about that. It was a difficult task to transition. But I think we’ve learned to be very flexible and offer patience and grace, and I feel like I gained better communication with parents,” she said. “I also learned there are a whole lot of resources out there to kind of open up their world, so we’re not tied to one textbook or one teacher’s knowledge within the district.”

Both Shively and Beadles hope to collaborate again on future projects. “Sharing real world issues (and the) smart, creative, out-of-the-box ideas the students have brought forth is a winning situation for all,” Beadles said. “It would be a pleasure to work with Deanna and the IVC students again.”