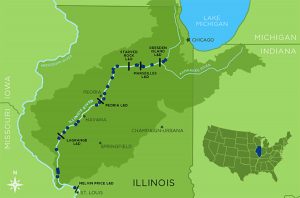 In1957, scientists set up a series of fish-monitoring stations in the Illinois River. Eventually, stations were added so that sampling extended from near Chicago all the way downstream to the Mississippi River

Populations of largemouth bass, bluegill, catfish and other sportfish are at the highest levels recorded in more than a century in the Illinois River, according to a new report.

Their dramatic recovery, from populations close to zero near Chicago throughout much of the 20th century, began just after implementation of the Clean Water Act, the researchers say.

The new findings, reported in the journal BioScience, add a more hopeful chapter to the ecological history of the Illinois River, which was one of the most productive rivers of the Mississippi Valley until it began receiving Chicago’s human and animal waste on a large scale in 1900.

“The biggest single negative change that happened to the Illinois River in the 20th century was the opening of the Chicago Sanitary and Ship Canal in 1900,” said Illinois Natural History Survey researcher and fish biologist Daniel Gibson-Reinemer, the lead author of the study. “After that, a lot of the untreated sewage from Chicago started flowing right down the canal and into the Des Plaines River, which is the headwaters of the Illinois River.”

Before 1900, the Illinois River had been extraordinarily productive.

But when the canal opened, the surge in sewage-related nutrients spurred an overgrowth of microbes that depleted the water’s oxygen, suffocating other organisms, said Richard Sparks, an INHS aquatic ecologist and co-author of the study. Hydrogen sulfide gas bubbled up from the depths, bringing up rafts of sewage fungus and other decaying matter. An oxygen-starved “dead zone” slowly spread from north to south.

Scientists from the INHS had studied the Illinois River since before the canal was built. In 1957, they established a series of fish-monitoring stations along the river. Over time, new stations were added so that sampling extended from near Chicago all the way downstream to the Mississippi River (see map). Since then, the researchers have conducted regular surveys up and down the river, using an electric charge to stun the fish for easy capture.

Sparks joined this monitoring program in 1972, when conditions in the river near Chicago were appalling.

“Back then, the only fish we were picking up were carp and goldfish, and it was awful seeing these fish,” he said. “They had tumors; they had eroded fins. They had various diseases, including what was called ‘pop-eye disease,’ where the eyes enlarged and just fell out of their eye sockets.”

Also in 1972, Congress passed the federal Clean Water Act, adding several amendments to earlier clean-water legislation. The CWA provided the regulatory framework and funding for the construction of infrastructure to capture stormwater and sewage for treatment.

Since then, more than $3 billion has been spent to construct a massive network of reservoirs and tunnels in and under Chicago to capture the city’s vast outpouring of sewage and stormwater runoff. The first of these projects, a reservoir aimed at reducing sewage effluent, became operational in 1980.

Starting in the late 1980s and continuing into the 21st century, populations of 13 sportfish species – including bluegill, catfish, crappie, largemouth bass, sunfish and walleye – increased dramatically in the Illinois River, the researchers report.

“In the late 1950s and the early 1960s, very close to Chicago, about 97 percent of the fish that we caught were common carp or goldfish. Those are invasive species, they’re not native, and they’re really pollution tolerant,” Gibson-Reinemer said. Today, those same species make up less than 3 percent of the researchers’ catch.

“If we lump all the sportfish together, we are now catching between 100 and 300 fish per hour now in those same areas, where in the 1950s and 60s, we were basically catching none,” Gibson-Reinemer said.

Changes in water quality parallel the return of the sportfish, said study co-author Jerrod Parker, an INHS large river ecologist. He led a 2016 study that found a close relationship between the rebound in fish populations in the upper Illinois River after 1983 and reductions in nitrogen pollution (in the form of ammonia), increases in dissolved oxygen and improvements in water clarity. All of these changes are linked to reductions in sewage effluent, he said.

Despite the good news, sportfish in the Illinois River still face many threats. Invasive Asian carp are multiplying and consuming zooplankton, a key food source for juvenile sportfish and other species. Hormone-disrupting chemicals are leaching into the rivers from industrial and municipal sources, much of the watershed is intensively farmed and sedimentation is displacing valuable habitat.

“Even in such a landscape, rivers can experience substantial ecological turnaround,” the researchers wrote. “Demonstrating how far the Illinois Waterway has come clearly validates efforts to improve river ecosystems.”

“What we found in this new study would be no surprise to any biologist: If you clean up the environment, your fish and game populations will be better off,” Sparks said. “What is unique about this study is that, thanks to decades of research, we can document this in a scientifically robust way.”

The research team includes other INHS scientists, researchers from the U.S. Fish and Wildlife Service and from the Illinois Department of Natural Resources. The INHS is a division of the Prairie Research Institute at the University of Illinois.