Peoria City Councilwoman Beth Jensen, (left) joins the discussion at a recent meeting called by citizens who are concerned about the possibility that Peoria may be losing its local public radio station, WCBU-FM. The meeting was organized by Elaine Hopkins, third from right, and Marilyn Copp, far right. (Photo by Elise Zwicky) / For Chronicle Media)

About 100 people packed a library meeting room recently to express concern and sometimes anger at reports that Bradley University is planning to partner its Peoria public radio station with the National Public Radio station in Bloomington.

“I listen to WCBU all the time in the car and at home. We can’t let it leave Peoria,” said Elaine Hopkins, a retired journalist who helped organize the meeting to both inform the public and to craft strategy to save the station.

Hopkins and fellow organizer Marilyn Copp said they were shocked at the standing-room-only crowd that turned out for the meeting at the Peoria Public Library’s Lakeview Branch.

The gathering got so boisterous at times that a staff member was dispatched to tell the crowd that “strident voices aren’t compatible with a library.”

Toward the end of the nearly two-hour meeting, a committee was formed that includes Hopkins, Copp, Peoria City Councilwoman Beth Jensen and several concerned citizens.

Jensen suggested forming the committee to try to meet with Bradley officials and also encouraged the crowd to share their concerns with the Peoria City Council. Three days later, six people spoke at the City

“I’m a longtime public radio listener and supporter. It sounds like it’s a done deal but maybe not if the public has an outcry,” Jensen said at the library. “It’s a huge thing for us to have public radio. It makes people want to live here and stay here.”

Copp said rumors have been swirling for months after local media reported that Bradley University will not be moving the radio station to another location on campus when Jobst Hall, its longtime home, is demolished later this year to make room for a new business-engineering complex.

WCBU-FM has been operating on the Bradley campus since 1970, but Bradley President Gary Roberts reportedly told faculty members at a meeting in August that the cost to move the station to another location on campus wasn’t feasible. It’s unclear when Bradley began negotiating a partnership with WGLT-FM. 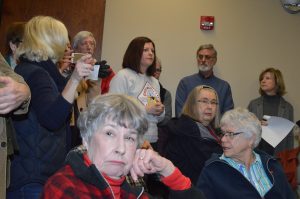 Ambra Haake, standing center, tried to calm a crowd of about 100 concerned citizens at a sometimes boisterous meeting regarding Peoria public radio station WCBU-FM. Haake, who heads up the station’s community advisory board, acknowledged that her board has not been privy to negotiations to join WCBU-FM with Bloomington station WGLT-FM, but she cautioned people not to panic. (Photo by Elise Zwicky / For Chronicle Media)

Roberts did not respond by deadline to a request for comment. His administrative assistant, Joan Perisin, said a response would be delayed because he had been traveling out of state since Christmas.

In an email interview, Eric Jome, director of media relations for Illinois State University, said discussions between the two universities “have been ongoing for several months. However, nothing has been finalized in regards to details or a time frame.”

Asked how an agreement with WGLT-FM might potentially affect WCBU-FM staff and Peoria programming, Jome said, “The intent of both parties is that the radio stations would keep their separate identities and serve their local markets by continuing to provide programming and local news reporting. More specific information would be available once any arrangements were finalized.”

Jome added that the scope and details of any future agreement will determine if the matter will require a vote by ISU’s Board of Trustees, but said it’s not currently on an agenda for the board’s consideration.

Many at the Lakeview Library meeting expressed frustration that Bradley officials haven’t shared information about WCBU’s future with the station’s 30,000 listeners and supporters.

“This has been pretty much an arbitrary decision without any public input, and that’s just wrong,” said Tom Hunt, a former executive director of WCBU, who headed the station for 11 years before retiring in 2015.

Ambra Haake, president of the WCBU-FM community advisory board, acknowledged the lack of transparency but cautioned the crowd not to panic.

“We don’t know all the details, but the agreement Bradley is working on may actually be the best solution given the situation. Of course everyone here would trust that if we had a seat at the table, but we didn’t so there’s a lot of tension right now.” 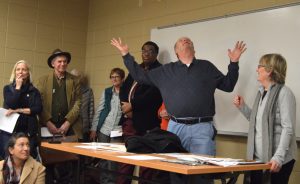 Tom Hunt, a retired executive director of WCBU-FM, gestures skyward while addressing a crowd of about 100 people who turned out for a recent meeting in Peoria to craft strategy to keep the station local after reports that Bradley University, which holds the station’s license, is negotiating a partnership to join the station with WGLT-FM at Illinois State University. (Photo by Elise Zwicky / For Chronicle Media)

The advisory board functions as a bridge between the community and Bradley University and is involved in fundraising activities, but Haake admitted the board has not been included in any of Bradley’s negotiations with ISU.

“How much Peoria content do you think WGLT will have?” Hunt said. “I’d want to see an agreement that they would keep Peoria programming. I don’t trust that.”

Hunt also took issue with reports that moving the station to another location on the Bradley campus would cost $700,000. “I’ve moved several radio stations in my 52-year career in broadcasting. You can move a station and get a good sustainable basic operation for a couple hundred thousand dollars, which is easily achieved with a capital campaign,” he said.

Kathryn Mosher is one of several WCBU-FM volunteers who read local news publications  transmitted to visually impaired and print-handicapped people free of charge on specially equipped receivers. “If WCBU moved to Bloomington, I don’t know how many of us volunteers would be able to continue doing that, so it could negatively impact the visually and physically impaired,” she said.

Bradley officials attempted to give assurances at a WCBU-FM advisory board meeting held four days after the public outcry at Lakeview, but Hopkins said her committee will continue to fight for written guarantees that local staff and programming will remain and that details of any agreement will be made public and approved by both the Bradley and ISU trustees.

Bradley’s chief information officer Zach Gorman told the advisory board that the university has identified space at Bradley for a new studio, and university spokeswoman Reneé Charles said the university intends to keep staff and programming in Peoria.

“Talk is cheap, and it’s not against the law to lie to the public,” Hopkins said.