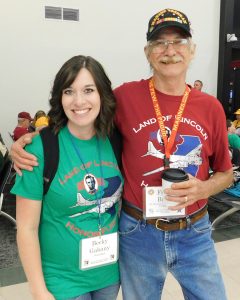 When Frank Burch returned from military service in Vietnam in 1971 he was greeted by a hug from his father and protests by anti-war activists.

“I flew into Lambert Field in St. Louis, it was a bad scene,” recalled Burch, an ex-Marine and now a retired plumber from Springfield. “I walked off the plane and my dad put his arms around me and just kind of hugged me close to him and walked me out to the car. It wasn’t pretty at all.”

Forty-six years later, there was universal respect and a loving embrace for Burch and more than six dozen fellow veterans who embarked on a whirlwind trip last week to Washington, D.C. and a tour of war memorials.

“This is great, all these people here,” said Burch. “It’s amazing. I never thought I’d get picked for this.”

Burch joined a handful of World War II veterans along with a majority who served in either Korea in the early 1950s and Vietnam in the 1960s and ’70s on the all-expenses-paid tour of Capitol monuments and memorials organized by the Springfield-based Land of Lincoln Honor Flight chapter Sept. 12.

Vietnam veterans, now in their 60s and 70s not only appreciated the trip but also the significance of finally being held in the same high regard as their older counterparts. 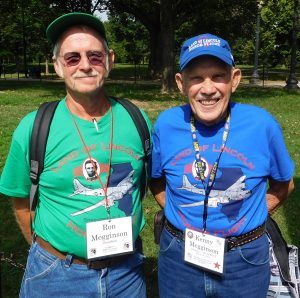 Bob Matteson, a 94-year-old ex-Marine with bright blue eyes and a full head of white hair, figured Vietnam veterans would be most appreciative.

“I’m of a mind that the Vietnam veteran is going to get the best results, from what I’ve learned from talking with them when they come home,” said Matteson, a co-founder of the Springfield chapter.

“The Vietnam veterans were treated poorly. One guy said ‘I’ve been waiting 60 years for something like this. We kind of felt we did a good job but the reaction at home was that we did a lousy job’,” Matteson added.

A Marine who served in World War II’s Pacific Theater, Matteson made a 2008 Honor Flight out of St. Louis. Upon returning, he joined with colleague Ray Wiedle to form a Springfield Honor Flight chapter.

Veterans on the Honor Flight trip from Springfield to Washington D.C. pose for a formal portrait in front of the reflecting pool at the World War II memorial on Sept. 12. (Photo by Jack McCarthy / Chronicle Media)

“We took our first flight in May of 2009 and we’ve been going and growing ever since,” he said. “It makes you proud as all punch to get these guys to go to Washington, D.C. and enjoy themselves.”

The 156-person delegation was mostly from central and southern Illinois communities and included 75 veterans. It started with an early morning flight from Springfield’s Abraham Lincoln Capital Airport to Washington’s Reagan National Airport and included comfortable bus transportation to seven stops around the District and Virginia.

Each veteran was accompanied by a volunteer guardian, typically a friend or relative. 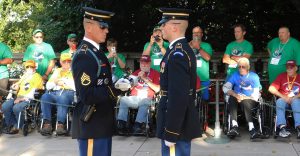 The central Illinois Honor Flight members closely watch the ritual of the changing of the guard at the Tomb of the Unknown at Arlington National Cemetery on Sept. 12. (Photo by Jack McCarthy / Chronicle Media)

The first stop of last week’s day-long visit was the Capitol’s newest monument — the World War II memorial. It features a classic design with arches and pillars surrounding a reflecting pool. From there it was on to memorials with decidedly different looks commemorating the Korean Conflict and Vietnam.

The veterans also had a distant view of the White House, a closer drive-by of the Pentagon and visited the Smithsonian Air and Space Museum’s annex in Virginia, home to the retired Space Shuttle Discovery, a stealth fighter and other historic aircraft.

The day in D.C. wrapped up at Arlington National Cemetery to witness the ritual changing of guard of elite U.S. Army personnel at the Tomb of the Unknown.

Honor Flight Network is a nationwide umbrella organization with an estimated 133 chapters that raise funds and organize trips of veterans to Washington, D.C. Along with Springfield, there are Illinois chapters in Chicago, Fox River Grove, Lake County, Quad Cities, Peoria, Quincy and Marion.

Images of visitors to the Vietnam Memorial are reflected off the black granite surface as they study names of the fallen during a visit by a delegation of Illinois veterans this week. Upper right: two visitors work together on a rubbing of an engraved name on the wall. (Photos by Jack McCarthy / Chronicle Media)

The Springfield chapter has organized 46 flights and transported nearly 3,500 veterans on tours since 2009

Joan Bortolon, current Springfield Honor Flight president, has been on them all.

“Every flight is different, every veteran is different, it doesn’t ever get old,” she said. “My original motivation was to honor the World War II veterans and get them to see the memorials because my father died the year before this (was opened),” she said. “I wanted to do for someone else’s father what I could not do for my own. After my first flight I wanted to do it for everybody’s father.” 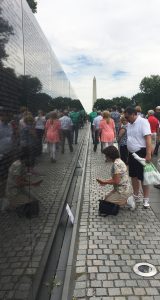 Images of visitors to the Vietnam Memorial are reflected off the black granite surface as they study names of the fallen during a visit by a delegation of Illinois veterans this week. Upper right: two visitors work together on a rubbing of an engraved name on the wall. (Photos by Jack McCarthy / Chronicle Media)

There were concerns that Washington,D.C. might be affected from remains of Hurricane Irma, which battered the Caribbean, Florida and the southeast U.S. last week.

But fears weren’t realized as last week’s tour unfolded under mostly sunny skies, temperatures that rose through the 70s and wispy clouds. 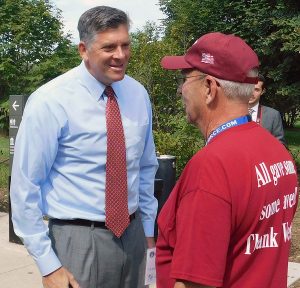 The first stop was among the most majestic and, for World War II veterans, the most memorable.

“I was only 17 when I went in (the Navy) and I came out of a little town,” said World War II veteran Kenny Megginson of Murrayville. “This is something, it’s unreal. I’ve never been to Washington. I can’t imagine all this. It took a lot of money (but) I’m glad I’m here.”

Waiting for the Illinois delegation at the World War II memorial were two Illinois congressmen. 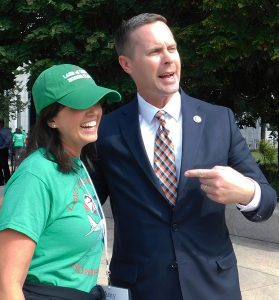 “I’ve just been in Congress for two years, but this is one of the neatest things I’ve gotten to do,” said Rep. Darin LaHood, a Republican who represents the Peoria-area 18th district. “To come here and see our veterans — whether it’s World War II or Korea or Vietnam — and pay tribute to them and thank them for their service (is) really a neat thing and for them to see many of the monuments for the first time.”

Rep. Rodney Davis (R-13th) represents a district that runs northeast from the St. Louis area to include Springfield, Decatur and Champaign-Urbana plus portions of Bloomington and Normal.

He said he tries to make it to every Honor Flight arrival.

“It’s important to talk about what the service of our veterans means to us,” he said. “The reason I come out here — besides being able to see constituents — is just to say ‘thank you.’ These are their monuments. What they did to fight for our freedom allows somebody like me to actually serve in Washington.” 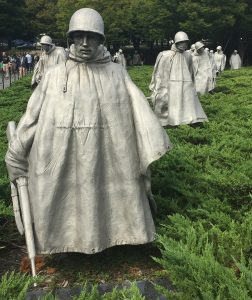 The next stop allowed the delegation up-close views of Korean and Vietnam sites, plus the Lincoln Memorial.

The Korean memorial is a collection of 19 stainless steel statues of soldiers trudging through a field of juniper plants, deliberately left to grow to represent the Korean terrain. Opened in 1995, it is supported and maintained by the South Korean government.

The somber Vietnam memorial wall is steps away. Featuring a 246-foot long reflective black granite wall, the memorial contains the engraved names of 58,286 persons who died during American involvement, running in chronological order by date of death. It was dedicated in 1982.

Honor Flight members joined hundreds of other visitors who slowly moved past the thousands of names engraved on the wall, which gradually rises, reaching a peak of more than 10 feet to represent the heaviest American losses.

Some visitors used pencil and paper to create a rubbing of the name of a buddy or loved one.

A bus trip west through Washington’s suburban Virginia suburbs ended at the mammoth hangars containing some of the crown jewels of American aviation and space flight.

The delegation saw the Enola Gay bomber, which dropped the first atomic bomb on Japan, a stealth fighter and an Air France Concorde.

But the star was the Space Shuttle Discovery, dominating a hangar devoted to space exploration and containing other early American spacecraft.

The final stop was the sprawling Arlington National Cemetery to view the changing of the guard at the Tomb of the Unknown. The commanding officer offered a subtle salute to assembled veterans as he approached a guard to relieve him from duty. 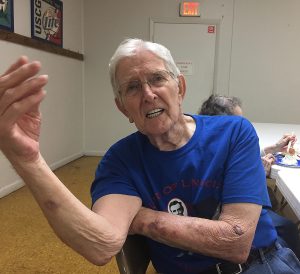 Bob Matteson, a 94-year-old ex-Marine, is among the co-founders of the Springfield-based Honor Flight chapter. (Photo by Jack McCarthy / Chronicle Media).

veterans on hand as a way to tell them he’s aware of their presence.

Tired, but satisfied Honor Flight participants then boarded for the flight home as the last rays of the setting sun faded.

But there was still one more salute ahead as the veterans returned to Springfield at around 9:15 p.m.

Several hundred flag-waving and cheering supporters — families, friends, American Legion and service organization members, and even a beauty queen — lined the airport concourse and hallways as the veterans were escorted through the crowd.

One veteran was moved to tears by the reception.

The three World War II veterans on the trip, now in their 90s, may be among the last as Springfield Honor Flight has steadily worked through a waiting list.

Vietnam veterans will likely be a majority of future honorees beginning with next month’s final flight of 2017 and continuing into 2018 when trips resume in April.

—–  Love, respect for Illinois veterans as they take Honor Flight  —-