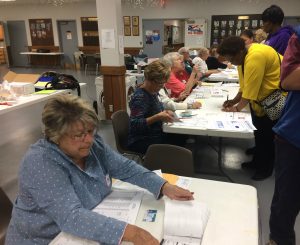 Voters in Peoria County approved a property tax increase Nov. 8 to provide assistance to people with developmental disabilities, military veterans, and the families of both living and deceased veterans.

The non-binding referendum passed with a 43,115 to 34,708 and awaits approval by the County Board. County residents will see a property tax increase of 0.5 cent for veterans’ assistance and up to 1 cent for services to developmentally disabled residents.

Once approved, the increase will cost most homeowners around $7. The annual revenues will total around $670,000; funds which will be governed by the Care and Treatment Board.

PPS has outlined more than 100 projects in 27 schools, including new windows and roof repairs, security and technology upgrades, and completing plans to install air-conditioning in every school.

Peoria County voters rejected a referendum to impose a quarter percent county sales tax increase to improve the county’s derelict roads, some of which are in the city of Peoria. The final vote was 43,115 to 34,708.

Had it passed, the tax increase would have generated $67.5 million in revenue, with $34.4 million earmarked for 10 high-priority projects. Peoria County partnered with the city of Peoria in an agreement in which the city would assume ownership of roads in the city once improvements were complete.

A $2.25 millions bond referendum will fund a 7,000-square foot addition to Rankin Elementary School in Pekin. The referendum passed with a 620 to 485 vote.

A $5.885 million Deer Creek-Mackinaw School District building bonds referendum was approved by Tazewell and Woodford county voters to fund a new football field at Dee-Mack High School. A 30-cent increase in the portion of the district’s equalized assessment valuation tax rate for the education fund failed 1,517 to 1,453.

Woodford County voters also rejected a referendum to increase the education fund tax rate by 31 cents in the Metamora Grade School District. The current rate is $1.52 and the increase would have generated $507,000 in annual revenue.