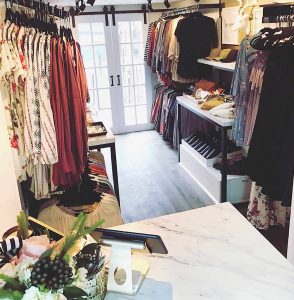 The Runaway Rack, owned by Shay Obery of Metamora, is a mobile boutique that features ladies’ clothing, shoes and jewelry, as well as a small selection of kids’ clothes. Obery parks the truck at various spots around the Peoria area, making four to five stops a week. (Photo courtesy of Shay Obery)

Mobile retail in Peoria is no longer limited to food trucks, thanks to former teacher and entrepreneur Shay Obery.

The Metamora resident launched the Runaway Rack, a mobile boutique featuring clothing, jewelry and shoes, in January 2017, joining about 500 shops on wheels nationwide.

A few other mobile stores have since popped up in the area, which Obery says is a good thing.

“I was the first one in Peoria, but I wasn’t the one who invented this mobile boutique idea. If anything, I think it’s cool our community can come together and support one another and build each other up and learn from each other,” she said.

Obery was a third-grade teacher in Chillicothe but was looking for a new adventure several years ago when her sister first took her to a mobile boutique in St. Louis. “I couldn’t stop talking about it,” she said. “It took a few years, but then I decided to jump in and do it.”

Within about four months of making that decision, Obery had her fully stocked clothing boutique out on the streets.

To get to that point, Obery said, “I didn’t really even know where to start, but it’s insane what you can find out on the internet. In true teacher-style, I made a binder and started gathering information and knocking out every step possible. I had thought of the name and formed an LLC, and then someone from my family gently reminded me that I couldn’t be mobile until I had a truck.”

She began scouring Craig’s List and even had “some wild ideas of driving to Florida to pick one up,” when her husband, Brian, suggested first looking in Illinois. Eventually, the couple bought an old tool truck in Springfield.

“It was pretty dingy and gross when we got it, but my husband and my dad (Tim Tobin) are pretty handy, so they got it all the way down to the studs and then it was easy to build out after that,” Obery said.

“My husband’s a farmer and we got the truck during harvest season, so he worked on it Saturdays after he farmed all day and all day Sundays,” she added. “My dad was able to weld me the racks and the table frames, and then we picked up some faux marble slats for the counter tops. It was just a fun family project.”

She then turned back to the internet for ideas on how to stock the truck. “I was able to subscribe to a podcast about it, and they kind of walk you through every step,” she said. “I knew I would probably have my clothes come from the fashion district in L.A. I haven’t been out there to buy, but I’m constantly on my phone picking out things that come right to the house that I can put on my truck.”

The truck holds more merchandise than she originally thought it would, which Obery said surprises customers when they step into the space. “Right now the truck has between 30 and 50 different pieces, and each piece comes in different sizes. I have a wide selection of tops and dresses and pants, and we have shorts in the summer and jeans in the winter and coats and jackets. I also have a couple of shelves of shoes, and I have partnered with a local girl, Amy Knapp, out of Eureka to sell her jewelry.”

Former teacher and entrepreneur Shay Obery poses on her shop on wheels, the Runaway Rack, which was the first mobile boutique to hit Peoria street streets last year. Obery has since added a website for online ordering of the clothing, shoes and jewelry that she stocks. (Photo courtesy of Shay Obery)

The truck can comfortably hold up to 10 shoppers at one time, although Obery said she’s had nearly 20 women shopping on it before, which she admitted was a tight squeeze. The boutique is geared to ladies from mid-20s to late 50s or 60s, but she does count an 85-year-old woman as a repeat customer. The Runaway Rack also has a small selection of children’s clothing.

Obery said she makes four or five stops in a week, typically parking at businesses that invite her to be there and staying two to five hours at each stop. She’s parked all around Peoria, which doesn’t require a permit as long as she’s on private property, and at many of the smaller surrounding towns, including Pekin, Morton, Washington, Mackinaw, Peoria Heights and Roanoke.

She posts a schedule of the stops weekly on the company’s Instagram and Facebook pages. Earlier this summer, Obery also launched a website for online shopping. The site offers clothing for women and kids, as well as plus sizes, which she hopes to begin carrying on the truck soon.

Even if the online part of her business takes off, Obery said she’ll keep the mobile boutique. “I know online shopping is huge, but there’s something about going and seeing things and trying them on and having that personal interaction, instead of just getting something on your porch a couple of days later,” she said.

Emily DuPage of Pekin said her employer, Titanium Force Cheer, invited the Runaway Rack to a fundraiser they held earlier in the year. “We loved it,” DuPage said. “They have high-quality, trendy clothes for reasonable prices. I will definitely be shopping there again.”

Obery said the business has exceeded her expectations so far. Her dream was to be able to quit teaching in five to ten years, but she was able to give it up and work full-time on the truck within six months of opening.

Other mobile boutiques that have since opened in Peoria include Fox and Pine, No Roots Boots and Brazen.

The Runaway Rack will be parked at 412 Main Street in Morton from 10 a.m. to 4 p.m. Friday, Sept. 14, and 2 to 7 p.m. Saturday, Sept. 15, during the Morton Pumpkin Festival. For other upcoming stops and more information about the shop, visit its Instagram or Facebook pages or its website at www.therunawayrack.com.