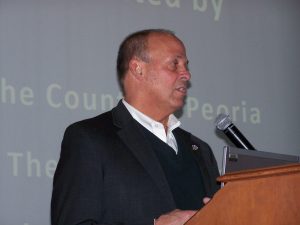 Leading off the 40-minute request session, a joint, city-county direct sponsorship request for sales and use tax reform was brought forth by Sorrell.

“We all know that sales taxes are very different for brick and mortar stores than they are for online sales,” said Sorrell. “Over 70 million households in the United States are Amazon Prime customers. We are asking for specific legislation that would collect and distribute sales and use taxes consistently regardless of the point of purchase.”

Also relating to taxes, Sorrell pointed out that the current state budget provides for the collection of a 1.5 percent administrative fee on locally imposed sales taxes. The city and county of Peoria would like legislators to eliminate or reduce the state administrative fee on the collection of locally imposed sales taxes, he said.

Urich then came to the podium with a city proposal that legislators should sponsor a bill that would expand sales tax to consumer services.

“In 1965 goods were 41 percent of the state’s GDP,” he said. “Today it is only 17 percent. Our state has become more service-based than goods-based, and we would like to see discussion of expansion of sales tax to services. We could generate enough revenue to actually lower the state’s 5 percent rate, according to a comparative statistics report by the Center for Tax and Budget Accountability. Outside of Kentucky and Missouri, Illinois has one of the lowest per-capita tax rates in the nation.” 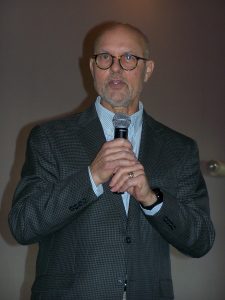 Shifting gears, Urich next voiced a city request for public safety pension reform. “This is probably our biggest issue. It is the area in our budget that is growing faster than any other. If you look at the next 10 years, we are going to have $80 million in additional payments to our police officers and firefighters. We need to figure out a way to pay for these pensions for the taxpayers,” said Urich.

Sorrell asked for expansion of the number of counties that are eligible for a county motor fuel tax to include those with a population greater than 100,000. The current statute does not offer a referendum option for those counties, he explained. Sorrell also detailed county requests for juvenile justice reform and bail reform.

Next, public health administrator Hendrickson brought forth a long list of asks, including a re-evaluation of the Grant Accountability and Transparency Act, an increase in public health funding, implementation of a Health Impact Assessment requirement that incorporates health concerns into all state policy decisions, and increased funding and legislation on integrated data systems between government, healthcare and human service providers. Hendrickson is seeking ways to increase revenue for the department of health, which she said invested heavily in resources to investigate synthetic marijuana overdoses and for disease prevention and control during 2018.

“The Peoria City-County Health Department received less than $325,000 in local health protection grant funding through our Local Health Protection Grant in 2018. I would like to highlight the amazing work of our staff, which included doing 2,006 disease investigations as well as 10 outbreaks, as well as our food safety inspections, which numbered over 4,000,” Hendrickson said, while asking for a statewide increase in LHPG allocations from $18.1 million to $26 million. “The proposed LHPG funding is required to maintain basic health standards.”

The following position support requests were made of the legislators by the city of Peoria: 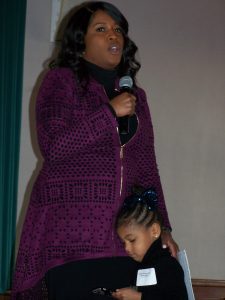 Peoria County’s wish list included support for supplemental appropriation to the Supreme Court budget to increase funding for probation services, and to hold CMS accountable to the requirements of legislation requiring Medicaid payments to skilled nursing facilities. From public health came a request for support for raising the minimum age of tobacco sales from 18 to 21 years, and to advocate for a health equity framework within legislation that may legalize marijuana in Illinois.

Hendrickson, Sorrell and Urich finished their presentations with a slew of capital project funding requests, including several much-needed road improvement projects within Peoria and on state routes and $725,000 to replace the Peoria City-County Health Department roof.

Next came remarks from the four state legislators in attendance. Peoria Democrat Koehler began his remarks by noting that state legislators sponsor more than 3,000 bills each spring and encouraging city and county leaders to enlist the aid of state capital lobbyists to gain wider traction for their proposals. As for the morning’s requests, Koehler touted his self-sponsored Senate Bill 43, which seeks to improve the Medicaid payment triggering mechanism for nursing homes. As for sales tax and internet sales, Koehler said a recent court decision has paved the way for states to impose their own sales tax system on internet sales.

“We are going to get something done on this,” he said. “We are working on something that will bring more revenue to state and local governments. This issue isn’t going away, with internet retail sales continuing to grow and grow.”

Koehler also addressed ways to fund state route road repairs. “Route 24 is a prime example of why we need a capital bill,” he said.

Weaver, a Republican, stressed that after years of political gridlock in Springfield he is optimistic that lawmakers will be able to reach across the aisle and pass meaningful legislation under new Gov. J.B. Pritzker. He offered his support for legislation to even the playing field between brick and mortar and internet retail stores by imposing higher internet sales taxes for states and communities.

Weaver also expressed optimism for passage of a capital bill during the next legislative session. “It’s going to happen. With all four caucuses covered here in our community, I think we’ll have real good cooperation to make sure the right things happen for downstate,” he said. As for pension reform, “with J.B. in control and the Democrats having both chambers, they’ve got a chance to make things happen,” Weaver said. “We’ve got to have pension reform.”

Gordon-Booth said that while she would support any of the legislative requests that would benefit those in her district, she would like to see language in all proposals that ensures projects include a diverse workforce with “equity laws” are enforced. “We are talking about spending a lot of state dollars here in the city and in the county, and I’d like to see all those projects are being done through an equity lens that ensures those working on the projects are reflective of the community we live in,” she said.

She asked for local support for an economic development package she is creating, along with a tax credit bill to address blighted buildings.

Spain said he supported pension reform, online sales tax reform and other requests made by the city and county, while urging city-county officials to continue to find ways to consolidate their services in order to trim their budgets.

“I will continue to pursue public safety pension reform in a way that is doable and achievable,” he said. “Just yesterday we introduced House Bill 270, which addresses the issue of sourcing of online sales taxes. It’s going to be a fight. I also want communities to be able to consider their own 1 percent add-on to online retail sales as does the city of Chicago.”