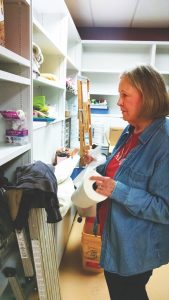 Pets for Seniors volunteer Rosemarie Gardner stocks the hospital room at the nonprofit’s new shelter located at 3809 N. Sterling Ave. A grand opening to show off the new shelter and the organization’s Forever Home Resale Shop at the same location is planned for June 2. (Photo courtesy of Pets for Seniors)

After being in rural Edwards for 16 years, Pets for Seniors now has new digs in Peoria for its felines while the shelter’s dogs will now reside in foster homes prior to adoption.

The shelter moved recently to a space adjacent to the organization’s Forever Home Resale Shop at 3809 N. Sterling Ave. A grand opening celebration is planned for June 2.

“When we started the resale shop, our vision was to have the shelter and the shop under one roof,” said PFS board president Liz Pollack. “This way when people are shopping at the resale store, they can see the animal shelter is just down the hall and they’ll understand what their purchase is supporting.”

While it’s a great space for cats and kittens, the new shelter isn’t conducive for dogs because there isn’t any green space to walk them or to let them run, Pollack said.

“We only usually have about six small dogs at any one time anyway because they get adopted pretty quickly. So, we decided it would be best to put them in foster homes rather than having them there at the shelter,” she noted.

Pets for Seniors, which is celebrating its 20th year, is a nonprofit group that matches cats and dogs from animal control facilities with senior citizens who might need a little help with the responsibilities of pet ownership. The group also has a Pets for Saving adoption program that’s open to all ages.

While Peoria-based, Pets for Seniors facilitates adoptions within a 200-mile radius that includes Chicago and its suburbs, rural and small town northern Illinois and central and much of southern Illinois. The organization has found homes for about 3,600 animals since it was founded in 1999 by Barb Cathey.

Volunteers moved six cats to the new shelter at the end of April. A litter of kittens are currently in a foster home but will be moved to the shelter when they are old enough to be adopted.

“The cats have adjusted extraordinarily well,” Pollack said. “There’s lots of shelving and we put down cat beds and blankets, so they kind of have their own little private condos. There are also lots of places for them to climb up high, which, of course, they love to

The new shelter is not necessarily bigger than the previous space, but it’s divided differently. “We have rooms that are dedicated,” Pollack said. “We have a janitor’s room that we didn’t have before, a hospital room, a big cat room, a kitten room and a greeting room for when people want to meet a dog for possible adoption.”

The only downside to the new shelter, Pollack said, is that it doesn’t have any outside windows, but PFS has a plan to address that.

“We plan to have a flat-screen TV for showing YouTube videos of fish and birds,” she said. “Cats don’t really understand the difference between seeing birds out a window and seeing them on television.”

Glass doors in the interior hallway will allow people to watch the cats and kittens at play if there’s not a volunteer at the shelter to let them in. The shelter will be able to accommodate up to about 30 felines, Pollack added.

PFS needs more volunteers for the shelter and additional foster homes to care for dogs. Interested fosters can apply on the PFS website.

“The foster must be able to take the dog to vet appointments, adoption events and to appointments with potential adopters,” said PFS founder and director Barb Cathey. “We

Cathey and her husband have purchased the old shelter from PFS, which is located on their property in Edwards.

The organization is also hoping to expand its respite program that takes care of animals for free if the adopter has to spend time in the hospital or short-term nursing home and its emergency relief fund to help fixed-income seniors who are hit with an unexpected expensive vet bill, Pollack said.

“We want to expand the respite program to include offering this service for other animals that weren’t necessarily adopted through us,” she said. “We need donations and grants that are specific toward expanding and funding both the respite program and the emergency relief. That may be several years in the future before we’re able to do that financially. But that is a goal.”

Donations are also needed to pay for medical care for older dogs and cats to get them as healthy as possible before being adopted by a senior.

“That’s our biggest expense,” Pollack said. “All of our older animals go to the vet right away for a complete check-up and they often need (dental care), which is extremely expensive.”

PFS offers discounted adoption rates for seniors 60 and older, and the pets come spayed or neutered and with all the initial vaccinations.

PFS benefits from monthly restaurant fundraisers in which the organization gets a percentage of sales on a given night and is hoping to host a big fundraiser in the fall. Details about upcoming events will be posted on the group’s Facebook page, PFS Shelter.

The organization also recently received a $4,000 grant from the Jean M. Ligon Animal Welfare Fund at the Community Foundation of Central Illinois that will go toward operating expenses.

Plans for the new shelter’s grand opening from 1 to 4 p.m. June 2 include special sales

For more information about the shelter or about volunteering, adopting or fostering, visit the PFS website at www.petsforseniors.org or call 309-446-9721.