A space station cargo capsule bringing supplies to the International Space Station has been named for a Bradley University alumnus who was the nation’s first African American astronaut.

The 13th Northrop Grumman Cygnus spacecraft has been christened the “S.S. Robert H. Lawrence” in honor and memory of the 1956 BU chemistry graduate. Lawrence was killed in December 1967 while training another pilot in a Lockheed F-104 jet at Edwards Air Force Base when the student crash-landed the plane.

“We’re really proud,” added Michelle Fry, chair and associate professor of BU’s Mund-Lagowski chemistry and biochemistry department. “We try our best over the years to honor the memory and legacy of Maj. Robert Lawrence.”

The Maj. Robert H. Lawrence, Jr., Memorial Scholarship at Bradley was established the same year of his death, and an endowed lectureship was established in his name in 1988. A year later, the Lawrence Conference Room was dedicated in Olin Hall.

About 51 people gathered in the Lawrence room on Feb. 9 for a launch party for the space station cargo capsule, but the launch was scrubbed less than three minutes before lift off due to “off-nominal data from ground support equipment at the launch pad,” according to NASA’s website at www.nasa.gov. The Antares rocket and Cygnus spacecraft remained healthy, the site reported.

In layman’s terms, Campbell likened the issue to having the check engine light come on in a car. “The question becomes: is it a problem with the sensor or the thing the sensor is supposed to sense,” he said.

Northrop Grumman, an American global aerospace and defense technology company, and NASA set a new launch date for Feb. 14 at NASA’s Wallops Flight Facility in Virginia based on the weather forecast and to provide time for testing the replaced ground sensors and allow for refresh of critical late load science cargo, according to a NASA blog.

The unmanned robotic cargo capsule will deliver about 7,500 pounds of science and research, crew supplies and vehicle hardware to the orbital laboratory and its crew.

“This is a mission they send up every once in awhile to resupply the space station with all sorts of different things,” Campbell said. “This particular mission has on its manifest about four or five different science experiments.”

One experiment involves samples of bacteria and bacteriophages, which are viruses that specifically invade and destroy those bacteria.

“They’re going to thaw them out on the space station and see how the viruses go after the bacteria in that sample. And then they will do the same experiment here on earth to see if there’s a difference in the microgravity of the space station and radiation in space versus down here to see if it makes a difference in how the viruses and the bacteria interact with each other,” Campbell explained.

For more information on other experiments aboard the spacecraft, visit NASA mission site. 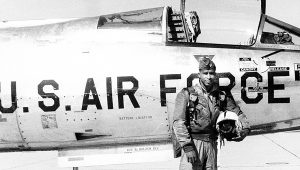 Bradley University alumnus Robert H. Lawrence, Jr., was a major in the U.S. Air Force and the nation’s first African American astronaut. A space station cargo capsule has recently been named in his honor. (Photo courtesy of Bradley University)

Six months before his death, Lawrence had been appointed to the Manned Orbital Laboratory program, a joint project of the U.S. Air Force and the National Reconnaissance Office that was to be a two-person lab that would orbit the earth for 30 days at a time.

A Chicago native who graduated from high school at 16 and earned his bachelor’s degree in chemistry at 20, Lawrence was known as a “go-getter,” Campbell said.

“He was very bright and well-respected. He was involved in the Air Force ROTC here and distinguished himself as the cadet commander,” he added.

Lawrence also was a track athlete in high school who competed at the state level and was a classical pianist, as well, Fry noted.

After leaving Bradley, Lawrence was commissioned as a second lieutenant in the U.S. Air Force and later obtained a doctorate in physical chemistry from Ohio State University. “We’ve heard stories about how he went on to train German pilots in the Air Force, and he learned their language so there wouldn’t be any issues or misunderstanding on their part,” Fry said. “He was a real self-starter who was very motivated and worked really hard.”

It took 30 years for NASA to recognize Lawrence as the country’s first African American astronaut, in part due to his untimely death, the relative secrecy of the MOL program and bureaucratic definitions of what it meant to be an astronaut, according to a NASA page devoted to Lawrence at www.nasa.gov/feature/robert-lawrence-first-african-american-astronaut.

In tribute to Lawrence, the crew of the Space Shuttle Atlantis carried his MOL mission patch into orbit during the STS-86 mission in September 1997. On the 30th anniversary of his death later that year, Lawrence’s name was engraved in the Astronauts Memorial Foundation’s Space Mirror at the Kennedy Space Center Visitor Complex in Florida, which honors astronauts who made the ultimate sacrifice for their space programs.

On the 50th anniversary of his death, Lawrence was honored by NASA in a ceremony attended by hundreds, which can be viewed at www.youtube.com/watch?v=i3FXDgt56Yo.

Fry said she thinks the naming of the spacecraft for Lawrence will inspire others.

“I think for all students, whether they come from underrepresented groups in science or not, his story is inspiring just to know that you can aspire to dream so big. You have to work really hard to get there and have a lot of persistence, but to send that message that these things are possible with big dreams, I think is really important,” she said.