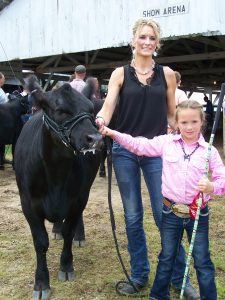 With an assist from mom, Kendra Story, 8, of Henry is proud to display her second-place Simantel at the Marshall-Putnam County Fair on July 14. (Photo by Tim Alexander / for Chronicle Media)

The theme of the recently concluded 97th Marshall-Putnam County Fair might have been “Surf’n-A-Fair,” but the true focus remained exactly where it has always been: on agriculture and family traditions.

As one of the dwindling number of Illinois county fairs to survive without a carnival midway —an intentional decision made by the fair board years ago — the dual-county exposition serves as a gentle reminder of rural summer fairs of yesteryear, with tractor shows, 4-H animal judging and homegrown vegetable contests taking precedence over roller coasters and racket.

“We get some comments here and there about not having a carnival midway,” said M-P Fair manager Rob Stadel, “but for the most part everyone just loves it the way it is. It’s great for the little kids.”

Stadel said the fair, held this year from July 11-15,  survives and prospers because of its agricultural connections, family-friendly atmosphere and its popular grandstand attractions, which include harness racing, a rodeo, demolition derby and national champion truck and tractor pull. Although parking and admission to the fair itself is free, fees charged for grandstand events act as the fair’s lifeblood.

“Our fair has small town appeal, but with a big event feel,” Stadel summarized. “We are very much relying on our small communities to support us, but we have big events that attract people from long distances. Our (Lucas Oil ‘America’s Pull’ PPL Super National) tractor and truck pull and our (Big Hat) rodeo attract competitors and fans from many other states.”

It requires “well over” 100 volunteers to plan and carry out the fair each year, according to Stadel. The yearly planning begins with a canvas campaign, when volunteers scour the area’s business districts in search of corporate sponsors.

“Local businesses are great to us as far as providing money, services and products to keep our fair going,” he said.

The Illinois Association of Agricultural Fairs lists more than 100 county fairs across the state. Cursory research done by Stadel revealed that likely less than 10 percent of those fairs operate without a carnival midway. However, history shows that agriculture-based fairs have done far more for commerce and industry than their glitzier, carnival-based cousins in the city, according to a July 18, 2018 editorial published in the New Richmond News.

“Fairs began hundreds — if not thousands — of years ago to as a means to bring people together, celebrate harvest time, to showcase people’s best efforts, and frankly, to spur commerce,” according to the newspaper. “After ribbons were handed out, people could sell or trade their produce, and the seeds those prize vegetables and fruits contained, thereby leading to the development and widespread use of heirloom varieties we use today.” 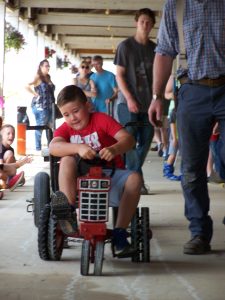 Cohen, 6, of Henry, Illinois, competes in the kiddie tractor pull at the 97th Marshall-Putnam County Fair, held in Henry on July 11-15. (Photo by Tim Alexander / for Chronicle Media)

The same held true with animal agriculture, accompanied by a shared knowledge of best practices for food preservation — key components in the advancement of agriculture in the United States.

“We owe a lot to county fairs that continue to play a vital role in our community and our economy,” the editorial stated. “Are they fun? Yes, but they are also fundamental.”

Tiffany Moodie, manager of the Marshall-Putnam County Farm Bureau, helped create the M-P Fair’s interactive “Imagination Acres” agriculture exhibit exclusively for youngsters and their guardians about six years ago. The idea recently netted the farm bureau an innovation grant that helps to maintain and improve the exhibit.

The area grows larger and more popular with each passing year, Moodie said on the 2018 fair’s third day.

“We got our farmers together and decided we wanted to reach out to young ones and try to explain agriculture in a fun environment,” she said. “The response from the farm community was overwhelming.”

Imagination Acres is further supported by the Illinois Farm Bureau Ag in the Classroom program, the University of Illinois Extension and a growing list of corporate sponsors, including many local businesses and individuals.

“I can’t say enough about the number of individual volunteers we have, as well,” Moodie said. “It takes about 15 farmers over three hours each to put the exhibit together.”

Imagination Acres attractions this year included a simulated crop duster airplane, a barge with a grain loading arm, and a myriad of signage, crafts and game stations offering opportunities for youth to learn about topics including animal agriculture, row crops and where their food comes from. “On Thursday night alone we had over 500 kids on the ground for family night,” said Moodie, who treasures the M-P Fair’s history and reputation as an agricultural exhibition. 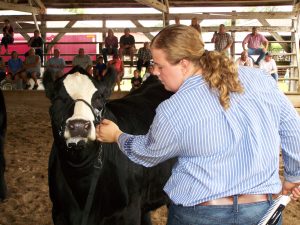 A competitor in the beef judging competition at the Marshall-Putnam County Fair shows off a prize bovine on July 14. (Photo by Tim Alexander / for Chronicle Media)

“The thing I like the most about our fair is that everyone can enjoy our fair — it is free for the public, and so many people have put their heart and soul behind the fair’s success,” she said. “Rural life is so much a part of Marshall and Putnam counties, and we are proud to show that tradition through our fair.”

The 97th M-P County Fair was another huge success, Stadel added, and organizers will soon be gearing up for its next incarnation, which will be held July 10-14, 2019.

Again, there will be no carnival midway, and the focus will remain on agriculture, which are traditions that people around here seem to enjoy just fine.

“We’d like to thank everyone from our local communities and businesses for their support, for entering our contests, volunteering and attending,” Stadel said. “Without them the fair would not continue to be successful year after year.”

—-  No midway carnival, but Marshall-Putnam Fair stands test of time —-