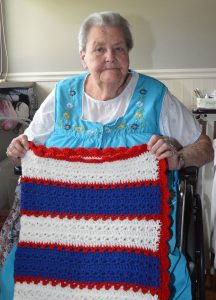 Alice Bannister, 85, of Chillicothe holds a lapghan that she crocheted for the Greater Peoria Honor Flight. Bannister has been making and donating lapghans for local Honor Flight veterans for about three years. (Photo by Elise Zwicky)

Octogenarian Alice Bannister has seen a lot of changes in the world during her lifetime, but one thing that’s remained constant is her ability and desire to crochet.

The 85-year-old Chillicothe resident pulls a crochet hook from her pocket throughout the day and puts it to a ball of yarn, often working on lapghans for Greater Peoria Honor Flight veterans. A lapghan is a small afghan designed to fit over a lap.

“I’ve probably crocheted about 20 lapghans for the Honor Flight,” the mother of five says humbly.

Honor Flight is a national non-profit organization dedicated to honoring America’s veterans by transporting them to Washington, D.C., to visit and reflect at the veterans memorials.

Bannister began crocheting lapghans for local veterans about three years ago after her daughter, Adele Spell, who grew up in Chillicothe but now lives near Washington, D.C., told her about meeting the Greater Peoria Honor Flights at Dulles International Airport.

“I would meet them when they landed at the airport, and I would spend all day with them,  taking photos and talking with them,” Spell said. “Just seeing all the veterans come off the flight, mostly in wheelchairs, gets me choked up every time.”

In talking with GPHF vice president Phyllis Piraino, Spell learned there was a need for lapghans for the flights, which she knew was right up her mom’s alley.

“I remember my mom crocheting when we were growing up,” said Spell, the youngest of her siblings and the only girl. “It was her routine in the evening. She would crochet while she was watching TV. It absolutely makes me proud that she still does that and donates the lapghans.” 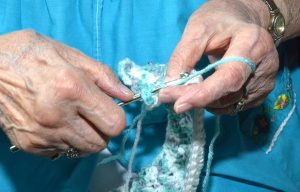 Alice Bannister, 85, of Chillicothe has been crocheting since she was about 8 years old. In addition to making and donating lapghans for the Greater Peoria Honor Flight, she crochets pot holders and other items to sell at an annual craft fair held in December at Peoria’s Richwoods High School. (Photo by Elise Zwicky)

Crocheting has been a lifeline for Bannister since moving into the Heritage Health senior care facility last year due to mobility issues.

“Her legs don’t work, but her hands still do,” said son Brad Bannister. “She crochets every day, and it’s kind of a neat thing that she makes these lap blankets.”

While work obligations have prevented Spell from meeting any of the Greater Peoria Honor Flights this year, her mom is continuing with the needlework, and she’s in good company. About 40 women help crochet lapghans and American flags for local Honor Flight veterans, Piraino said.

“This was originally started about four years ago by a lady named Mary Etta. Her husband was a veteran and three different times she crocheted 75 flags for all the veterans on the flights all by herself,” Piraino said. “Then she would also crochet one lapghan and asked us to give it to the oldest veteran on the flight.”

After Etta died in 2016, Piraino posted on Facebook, seeking others to pick up their crochet needles where Etta left off. “I thought maybe I’d get five people who would comment on the post, but all of a sudden there were about 40,” she said.

The Greater Peoria Honor Flight now tries to have a crocheted flag for every veteran on each flight and about 15 lapghans made with flag colors to give to the oldest veterans.

“Some of the ladies do a red-white-and-blue zig zag and some do squares, so it’s a nice variety of lapghans. Alice has done some beautiful ones for us. Our veterans absolutely love them,” Piraino said. 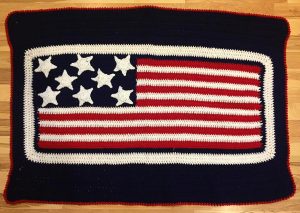 It takes Bannister about a week or two to make each lapghan. “Since I’m in here and have nothing else exciting in my life to do except bingo, it doesn’t take me near as long to make them as it used to,” she said.

Bannister grew up in Sterling and first learned how to crochet from her grandmother. “I enjoyed it from the start and have done it throughout my life,” she said.

Spell recalled that her mom tried to teach her to crochet in her younger years, “but I couldn’t sit still long enough to learn how to do it.

Bannister said she’s taught friends and even a few CNA’s at the nursing home how to crochet, and has shown one of her granddaughters. So far she has 10 grandchildren and six great-grandchildren.

Bannister came to central Illinois for nurse’s training after high school but quit after two years to get married. “You couldn’t be married and be a student nurse at that time,” she recalled with a shrug. “It was a hard decision to make because I went two years out of the three.”

She met her husband, Bob, at a church near the hospital that hosted square dances on Sunday nights. The two have been married for 65 years.

Thinking of other changes she’s seen in the world, Bannister said, “There’s no communication anymore with people. They don’t talk to each other. They’re too busy on the phone or the computer or the tablet or something. It’s frustrating to see. Back when I was growing up, there wasn’t all of that. There was a telephone, of course, with a party line, but not these phones that you carry with you everywhere you go.”

Besides lap blankets, Bannister also crochets baby blankets, pot holders, dish cloths, kitchen towels and hats that she sells at an annual December craft fair at Peoria’s Richwoods High School with help from her granddaughter, Stephanie, who mans the table during the show.

“I don’t think it’s ever too late to learn how to crochet,” Bannister said. “But you have to want to do it in order to learn how. The hardest part is sometimes just finding the yarn. People who do not crochet don’t know that there are different weights of yarn. I prefer to use number 4 weight.”

The next local Honor Flight is scheduled for Sept. 10.