While there’s no shortage of fairs and festivals in central Illinois this summer, only one takes visitors back to a medieval time of jousting, weaponry and falconry.

“It’s definitely something you have to experience firsthand. It’s not your typical festival,” Eva Kirschbaum, membership and marketing coordinator at Wildlife Prairie Park, said of the Olde English Faire.

For more than 35 years, the Olde English Faire was held at Jubilee College State Park before moving to Wildlife Prairie Park in 2010. The fair is now a fundraiser for the 480-acre natural habitat park.

“All the profit we make comes back to the park,” Kirschbaum said. “It goes toward helping take care of our animals, maintaining the trails, opening new attractions and just keeping the doors open.”

With a full list of about 40 entertainers, the Olde English Faire will feature everything from unique belly dancers to archery to the always-popular jousting, Kirschbaum said.

“Usually we have about 25 to 30 entertainers. This year it just so happened that it worked into everybody’s schedule so we’re closer to 40. Many of them follow the renaissance circuit throughout the year, and this is their full time job,” she noted.

Because the jousting is such a crowd pleaser, fair planners have added an extra event this year. The Knights of Valour, which have been featured on the History Channel, will do three jousts on Saturday and two on Sunday.

“This is full-metal, full-contact jousting. Two years ago a knight suffered a broken rib,” Kirschbaum said, adding that an ambulance will be standing by just in case.

According to the group’s website, the Knights of Valour have been entertaining North American audiences since 1997. Jousting, which consists of martial competition between two mounted knights using a variety of weapons, was popular in the Middle Ages, particularly between the 13th and 16th centuries.

Other entertainment will include interactive comedy, puppetry, cooking shows and a falconry sky show.

“We’ll have four stages going throughout the day. We’ll also have people selling treasures and trinkets, clothes, weaponry, renaissance-type food. It’s all stuff that’s made right in front of you, which is really unique,” Kirschbaum said. “One woman carves wooden roses that are just beautiful, and they even smell like roses. That’s not really something that you see all the time.”

Others will be reading fortunes, offering face painting, playing renaissance music and braiding hair in a style popular during medieval times.

“The vendors and the entertainers are so engaging,” Kirschbaum said. “They don’t break character at all. It’s very entertaining just to come and walk around.” 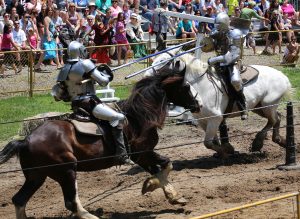 John Massaglia of Pekin said his family has enjoyed going to the Olde English Faire for the past three years.

“It’s exciting. There’s just something magical about that time,” Massaglia said. “The first year we went, we didn’t know exactly what to expect. We loved the falconry and the jousting. We’re looking forward to going again this year.”

The fair is expected to attract about 10,500 people over the weekend, including about 2,000 kids and parents on Friday, the Day of Enlightenment.

“It’s a special day for kids to come and learn about the renaissance. You can read about it in a textbook, but being able to experience it firsthand like this is really quite an experience,” Kirschbaum said.

The event is geared for ages 7 to 12 but is open to anyone over 5 and their parents. The kids will be divided up into groups that will spend time at each of five activities: historic birds of prey, arms and armor, siege weapons, the life of a knight and the light and heavy armor joust.

“Each one of those will have interactive learning. Kids will actually feel like they’re in medieval times,” Kirschbaum said.

Cost for the Day of Enlightenment is $6 for kids and $9 for adults. Advance registration is encouraged but not required.

Admission fees to enter the fair on Saturday and Sunday are $10 for adults and $6 for children ages 3 to 12. Anyone dressed in a medieval costume, such as a knight, princess or pirate, will get $1 off admission.

The fair, which will go on rain or shine, takes place in the train depot area at the front of the park. Parking is free but is about a seven-minute walk. A shuttle bus is provided for anyone who would have difficulty walking that far. A free hayrack ride will also be available to take guests the quarter-mile distance from the fair to the area of the park where the animals are located. 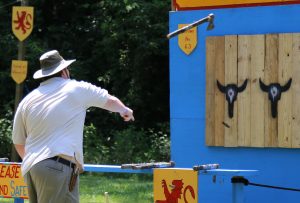 A guest at last year’s Olde English Faire at Wildlife Prairie Park plays an axe-throwing game. The fair will feature other games as well, including archery. It’s the only medieval festival offered this summer in central Illinois. (Photo courtesy of Wildlife Prairie Park)

Wildlife Prairie Park has been recruiting volunteers to help with the fair and the Day of Enlightenment.

“In the past, it has required about 300 volunteers, but this year we’re looking at needing about 400 people because we’ve extended the fair hours,” Kirschbaum said. “Honestly, people could show up the day of the fair to volunteer, and we would have a job for them. Some of the things we have them do is helping with crowd control, picking up trash, helping at the ticket gate by putting on wristbands, facilitating crafts, selling water, working the information table and helping with parking.”

For more information about volunteering, contact Lindsay Seiberlich at (309) 676-0998, Ext. 102, or lseiberlich@wildlifeprairie.org.

WHAT: The 43rd annual fair

COST: Admission on Saturday and Sunday is $10 for adults and $6 for children ages 3 to 12.

Anyone dressed in a medieval costume, such as a knight, princess or pirate, will get $1 off admission.

For more information, go to www.wildlifeprairiepark.org.