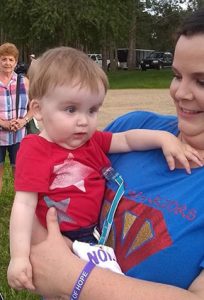 Kelsey Bastian holds her 19-month-old son, Wally, who was honored at this year’s Fourth of July fireworks celebration in Chillicothe. At the event, the Bastians helped raise awareness of organ donation and Barth Syndrome, a rare disorder that Wally battles. (Photo courtesy of the Bastian family)

Nineteen-month-old Wally Bastian of Chillicothe is living his best life, blissfully unaware that more than 8,000 people are following and applauding his story on Facebook.

However, Wally’s parents, A.J. and Kelsey, will be forever grateful for the ongoing support of the local community, many of whom turned out for a parade to welcome the toddler home in May after he had a heart transplant at a Chicago hospital.

“It was really emotional. I wasn’t expecting the turnout,” Kelsey said recently of the crowd that lined Fourth Street and downtown Chillicothe for Wally’s homecoming May 4 after he spent about 100 days in the hospital.

Unfortunately, Wally ended up back in the hospital just a day later due to an infection but has been home and doing well since mid-June.

“He’s talking up a storm,” Kelsey said with a grin when asked how it feels to have her son home. “He plays and he smiles more than anyone I know. He’s just literally enjoying life. It makes me emotional every day.”

Wally battles a rare metabolic and neuromuscular genetic disorder called Barth Syndrome that he was diagnosed with at 8 weeks. Kelsey found out she was a carrier of the disease after Wally was diagnosed, and the Bastians believe their first son, Henry, who died from heart failure at birth in 2015, likely had Barth’s, as well.

The disease is so rare that it only affects about 200 people in the world, almost exclusively males. It can affect nearly every system in the body, causing heart issues, infections and feeding problems, Kelsey said.

“The heart he was born with had the cells and tissues and genes in it that weren’t working properly from the Barth Syndrome,” she explained, adding that the disease is not expected to harm his new heart. 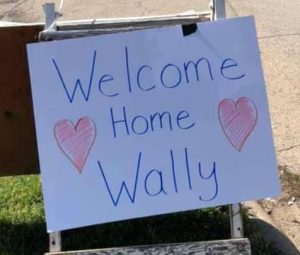 A handmade sign welcomed Wally Bastian home in May after the toddler spent 100 days in the hospital and underwent a heart transplant in Chicago. Wally’s parents, Kelsey and A.J., were overwhelmed by the number of people who turned out for a spontaneous parade to welcome the family home, but Wally ended back in the hospital just one day later. (Photo courtesy of the Bastian family)

Kelsey acknowledged it’s a tough subject that no one wants to talk about, but said, “There are so many kids that are still waiting on heart transplants or kidney transplants or liver transplants or whatever they might need. You look at Wally and he is loving his life. And our donor’s family did that for us at one of the hardest times of their lives.”

Wally managed to help other kids at Lurie Children’s Hospital in Chicago while he was battling infections after being readmitted in May. Because there wasn’t an open bed on the floor  Wally had previously been on, he was placed on a different floor that didn’t have baby equipment for the young patients.

“One of the nurses said most of the stuff people donate goes to the ICU, so they didn’t even have a bouncer that Wally could jump in,” Kelsey said. After getting permission from the hospital, she put out a request for donations.

“People are always asking me what they can do to help, and sometimes it’s hard to say this is what we need, so I put the request on Facebook and within a couple of days stuff was being mailed in. It was kind of overwhelming,” Kelsey said.

“The people on the floor were so amazed and so grateful. They said how did you do this? 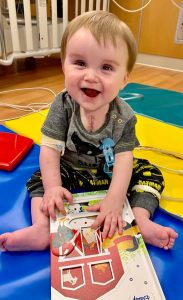 Wally Bastian, 19 months, grins while holding a book during a recent hospitalization at Lurie Children’s Hospital in Chicago, where he underwent a heart transplant in February. The Chillicothe community has embraced Wally, who battles a rare disease called Barth Syndrome. (Photo courtesy of the Bastian family)

I said: Well, Wally has a lot of followers. It was such a blessing.”

Most of the donations were left behind for other hospitalized kids to enjoy, but the Bastians did bring home a Mickey Mouse walker when Wally was discharged on Father’s Day, because he’s obsessed with the Disney character.  “Wally loves Mickey, music and animals,” Kelsey said.

The toddler is still at risk for infections and other issues due to the Barth’s and the rejection medications he takes post-transplant, and he also has battled withdrawal of some of the medications that were needed from being intubated and sedated for so long.

“He’s so sensitive, I feel, to everything,” Kelsey said. “They can’t just take him off the meds cold turkey, so we’re weaning him off that.”

As a precaution, the family tries to limit Wally’s exposure to crowds, employs a lot of hand washing and hand sanitizer and forbids anyone to wear shoes in their house.

“It’s hard because you want him to live life and enjoy stuff, but at the same time you have to decide if it’s worth it,” Kelsey said. Wally does enjoy swimming at his grandparents’ house, swinging in his backyard and attending a music class.

His most recent checkup with the heart transplant team was good, and he’s continued to gain weight, Kelsey said. He’ll continue to go to Chicago for monthly checkups for the first year post-transplant.

After watching her son go through so much, Kelsey said she still feels like she’s in a fight-or-flight mode waiting for the other shoe to drop. “I’m really trying to work on that, but it’s hard. He almost died,” she said.

“I feel like with every whine or every cry, something is wrong. And my husband will say: he’s a toddler. He’s still going to do normal things. So I’m really working through some of that grief and PTSD. When Wally is having a tough day, those days are scary days and those are hard days for me.”

Kelsey, a nurse, and A.J., a Chillicothe police officer, have good health insurance but it won’t come close to covering all of Wally’s medical care, so a GoFundMe campaign has been set up for the family, raising more than $21,000 so far.

To support the Bastians, visit the GoFundMe campaign at  www.gofundme.com/WonderfulWally17 or the Wonderful Wally Facebook page. Donations can also be mailed to Busey Bank, Attention Wally Bastian, P.O. Box 259, Chillicothe IL 61523. “Wonderful Wally” wristbands can be purchased for $3 at the Chillicothe Police Department.