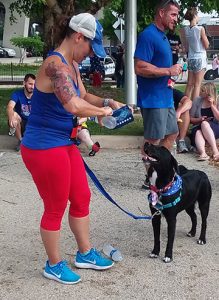 Long-time local radio personality, Anna Kincaid, pours a dish of cool water for her black Labrador Retriever, Boyd, after finishing the Peoria Jaycees’ 38th Annual Firecracker 5k. Boyd was among many dogs that either ran in, or watched, the popular Fourth of July race on Peoria’s riverfront. (Photo by Holly Eaton / for Chronicle Media)

Long before fireworks burst in air above Peoria’s riverfront, the pitter-patter of patriotic feet resounded along Water Street on Independence Day.

For the 38th time, the Peoria Jaycees sponsored its annual Firecracker 5000 5k, a 3.1 mile run that attracts a fun-seeking crowd as well as serious runners. Beth Hollar, the first to register for this year’s race, participates for one particular reason.

“We run in most races,” Hollar, of Bartonville, said of herself and her husband, “but we really love the patriotic ones.”

Hollar, who ran in a red, white and blue leotard and tutu, star spangled tube socks and fairy wings, has participated in the Firecracker for many years. Her husband Kyle began joined the race a few years ago, and this year, two of her cousins and her nephew, Joe Colvin, signed up.

Her cousins, Aaron and Andrew Dunham live in Pelion, South Carolina. Originally from Bartonville, the Dunhams were in the area to visit relatives. Both dressed patriotically, but Aaron, 30, stole the show by running in a stars-and-stripes suit, tie and dress shoes.

“Here comes Mr. Patriotic!” a Jaycees volunteer announced as Dunham neared the finish line, placing 123 out of 576. As the 453 runners behind him streamed in, most of them wore some manner of Americana. 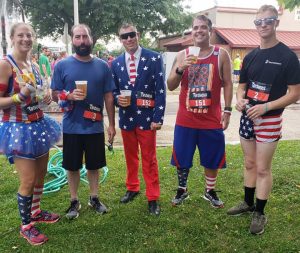 Beth Hollar, left, and her husband Kyle, third from left, have run in the Peoria Jaycees’s Firecracker 5000 5k numerous times. This year, they were joined by cousins Andrew Dunham, second from left, and Aaron “Mr. Patriotic” Dunham, and her nephew, Joe Colvin, far right. All are from Bartonville, though the Dunham’s now live in South Carolina, but were visiting family on Independence Day and joined the race. (Photo courtesy Beth Hollar)

Feet weren’t the only dogs in the race. Some spectators and runners brought pets along. Long-time local radio personality, Anna Kinkade, ran with her black Labrador Retriever, Boyd.

After the race, Boyd barely seemed winded as he waited for Kinkade to serve him a dish of cool water. The Jaycees provided complimentary bottled water, Powerade and Bud Lite drafts. Human registration cost around $35. Dogs ran for free.

The Peoria Jaycees focus on community betterment, and all funds raised help with local charities and provide leadership opportunities for its members, who range in age from 21-40, though those above the age of 40 may join as associate members.

Other events the Jaycees host are the Das Bier Run 5k and the Peoria Jaycees’ International Beerfest. Though the fundraisers include beer, they remain family-oriented, and the Firecracker divisions include children as younger than 10. 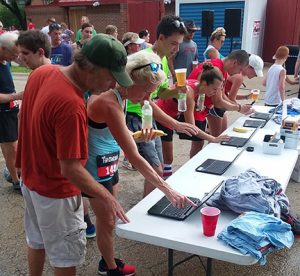 Runners in the Peoria Jaycees’ 38th annual Firecracker 5k check their standings after the morning race at a row of computers. The organization also offered complimentary water, Powerade and Bud Light drafts. Music was provided by local Todd Peterson. (Photo by Holly Eaton / for Chronicle Media)