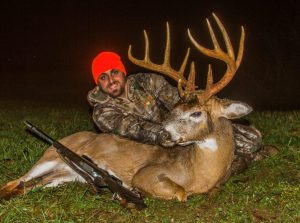 Chris Brackett of East Peoria shows off the 11-point “Unicorn Buck” he killed during his 2013 cable hunting show “Fear No Evil.” The deer was the second buck he had killed within minutes, violating Indiana law which allows hunters to kill only one buck per season. (Facebook photo)

The former host of a cable hunting show and the owner of a waterfowl outfitting service have each been banned from hunting during their terms of probation.

Christopher Brackett of East Peoria, former host of “Fear No Evil” on the Outdoor Channel, and Rick Hamm of Chillicothe, owner of Show Me Your Snows outfitting service, were sentenced in separate, unrelated cases for federal hunting violations of the Lacey Act.

Brackett, 41, is banned from hunting worldwide and cannot possess firearms during his sentence of 30 months’ probation. U.S. District Judge Michael Mihm further ordered Brackett to pay $3,500 in restitution to the state of Indiana and a $26,500 fine.

Hamm, 58, is banned from hunting and guiding worldwide during his sentence of 24 months’ probation. U.S. District Judge James Shadid further ordered Hamm to serve five days in jail, pay $2,500 in restitution to the state of Illinois and the U.S. Fish and Wildlife Service, and a $50,000 fine.

Brackett was sentenced Jan. 15 for unlawful transportation of wildlife, in violation of the Lacey Act. Brackett pleaded guilty in July to killing two bucks within minutes of each other, during the 2013 filming of an episode of his cable show, when Indiana permitted hunters to kill only one buck per season. Brackett further admitted that he transported the second, 11-point buck he had nicknamed the “Unicorn Buck,” for its unique antler formation, to his home in East Peoria.

The cable show host featured the Unicorn Buck kill on his television show in 2014. Brackett instructed his cameraman and producer to hide footage of the first buck killed, a smaller eight-point buck, and instructed an employee to destroy an eight-point rack prior to charges being filed against him. 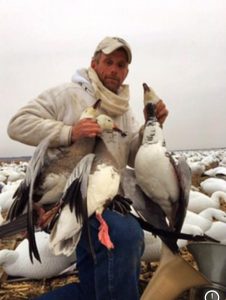 Rick Hamm of Chillicothe, owner of Show Me Your Snows waterfowl outfitting service, carries geese. Hamm has been sentenced to two years’ probation for using an electronic caller to lure geese into a shooting range during a 2015 guided hunt. (Facebook photo)

Hamm was sentenced Jan. 16 to the unlawful sale of wildlife, in violation of the Lacey Act. Hamm pleaded guilty in September to using an electronic caller to lure geese into shooting range during a 2015 guided hunt in Fulton County, knowing it was unlawful under the Migratory Bird Treaty Act and Illinois conservation regulations.

In a 2000 federal case, Hamm was fined $5,000 for federal violations of the Migratory Bird Act dealing with shooting waterfowl over the bag limit, transporting untagged waterfowl and hunting with lead shot.

Hamm’s co-defendants, Trent Gustafson, Zachary Entwistle, James Schupp and J. Weston Schupp, were each sentenced to six months’ probation, during which each is banned from waterfowl hunting, and ordered to pay a fine of $1,500.

The U.S. Fish and Wildlife Service conducted the investigations with the assistance of the Illinois and Indiana departments of Natural Resources.