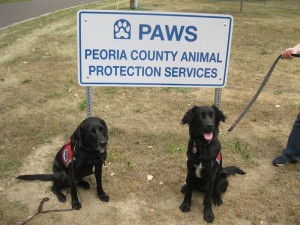 Peoria County Animal Protection Services, in cooperation with Peoria Humane Society, is offering its first ever “Home for the Holidays” promotion on all eligible puppies and kittens adopted between Dec. 19 – 23. (Photo from Peoria County)

Hagel Metal Fabrication Inc.,  2001 E. Washington St., East Peoria, closed Dec. 4 and at least 90 employees are now out of work. The plant had been there for 31 years. There was no explanation from company officials. Some reports said the workers were given a one-day notice of the closure. There was no notice filed with the state either, as required by law for companies employing as many people as Hagel had, according to the city of  East Peoria. The company was fined by the U.S. Department of Labor’s Occupational Safety and Health Administration in 2013 after an employee was killed by an automated laser-cutting machine.  OSHA subsequently placed the company on its  Severe Violator Enforcement Program, according to reports.  Prior to that accident, OSHA conducted seven inspections between 1989 and 2013, according to reports.

Peoria County Animal Protection Services, in cooperation with Peoria Humane Society, is offering its first ever “Home for the Holidays” promotion on all eligible puppies and kittens adopted during Dec. 19 – 23. In addition to the standard adoption fees, adopters can choose to give a $50 donation to the Peoria Humane Society and the shelter will coordinate with Santa to have his elves personally deliver the puppy or kitten to its new home on Christmas Eve. Gifts of a new pet must be given to members of the same household, preferably from parents or guardians to children. PCAPS will coordinate delivery of the puppy or kitten and participating adopters are encouraged to register for a delivery time as soon as possible when they adopt during Dec. 19 – 23.

“Home for the Holidays” may not be right for everyone. Therefore, PCAPS offers an alternative gift this holiday season: gift certificates that may be used for a cat, dog, or small animal adoption. This is  a great gift for those on your list who are considering a furry new addition to the family.

The county wants residents to consider giving an inscribed brick paver this holiday season that will be permanently displayed in the foundation of the new Veterans Memorial to be built in the Courthouse Plaza. While the memorial will honor veterans who served in the Korean War, Vietnam, Grenada, Panama, Gulf War, Somalia, Haiti, Bosnia, Kosovo, Iraq, Afghanistan, and the War on Terrorism, brick pavers are not required to honor veterans who served in these conflicts, so long as the inscription is appropriate for public viewing.

Granite brick pavers are available in two sizes for purchase: 4-inches by  8-inches and 12-inches by 12-inches. A 4-inches by  8-inches brick is $150 and includes three lines of text, 20 characters per line. The 12-inches by 12-inches brick is $500 and includes nine lines of text, with 21 characters per line. A certificate will be issued for each brick purchase that is suitable for presentation to the individual honored on the brick, if a veteran or other individual is recognized on the inscription. For more information regarding the purchase of bricks, or to download the attached order form, visit http://www.peoriacounty.org/auditor/veteransmemorial, email warmemorial@peoriacounty.org, or call the Peoria County Auditor’s Office at (309) 697-6006.

Media inquiries may be directed to Steve Sonnemaker, County Clerk and Chairman of the Peoria County Veterans Memorial Committee, at (309) 495-4638.

The City Council on Dec. 8 adopted a 2015-16 budget that includes increase in local sales, hotel, gas and property taxes. With the projected additional revenue the city will be able to not only balance its operations budget but also have more money next year for infrastructure projects and public safety, according the city.. Sales tax will increase by a quarter of a percent; the gas tax will rise by three cents;  and hotel tax will increase by 2 percent. In addition, there will be some fee increases on specific licenses and permits.  The increase in property taxes is projected to bring in an addition $3.2 million, with the average homeowner expected to pay around $50 more per year in property taxes to the city, according to reports. The city plans to accelerate some road projects starting next construction season with an additional $5.2 million for road improvements generated by the tax hikes.  The city expects there to be a few staff layoffs but it also plans to add an additional police officer for the streets due to a federal grant, according to reports.

Deonta M. Moore, 24, has pleaded guilty to federal drug charges after selling heroin to an undercover police officer in May, just days after selling the drug to a police Moore entered blind plea, without a written plea agreement, to one count of distribution of heroin. He faces up to 20 years in prison and remains in custody of federal marshals.  Moore is due back in federal court for sentencing on March 31.  Previously, Moore was sentenced to 40 months in federal prison in 2012 for being a felon in possession of a firearm — a loaded .45 caliber handgun — when he was arrested in  July 2011, at Krause and Oregon streets after a traffic stop, according to reports.

Donald R. Pauli, III, 36, of 4221 N. Illinois St., pleaded guilty Dec. 7  to unauthorized videotaping after he  videotaped a preteen girl last year while she was changing in a bathroom. Pauli pleaded guilty in Peoria County Circuit Court after prosecutors agreed to drop two counts of aggravated criminal sexual abuse. In exchange, Pauli’s punishment can be capped at probation, according to reports.  Pauli could do six months of jail time. He scheduled to be sentenced Feb. 19. Pauli’s wife found the videos on his phone, according to the state’s attorney’s office. Pauli is currently free on bond.

The Central Illinois Youth Symphony is celebrating its 50th year by commissioning a new musical composition specifically for the organization. The piece will premiere on Sunday April 17, 2016 at Metamora High School.  John Orfe , Ph.D. of Bradley University will be writing the new composition for CIYS to be titled “Prairie Sunrise, Prairie Sunset.”  To raise funds for the piece, the CIYS is undergoing a donation drive (through the online donation platform Kickstarter) that will be active now through midnight on Thursday, Dec. 17. The goal of the donation drive is to raise $15,000, which will cover the cost of writing and producing the piece. Each donor will receive a gift and/or be recognized in the CIYS for his/her contribution to the organization and its commission.  For more information on the CIYS, its 50th anniversary, or the donation drive, contact Executive Director Amy Zordan or visit CIYS.org.

Youth can register now for the annual Central Illinois Youth Goose Hunt, sponsored by the Illinois Department of Natural Resources, scheduled for Jan. 17-18.  To register for a drawing to participate in the hunt, youth hunters must phone in to the IDNR at (217) 785-8060 by the registration deadline of Thursday, Dec. 31.  The youth goose hunt will be held at private waterfowl hunting clubs in Peoria, Fulton and Knox counties.  A lottery drawing will be conducted on Jan. 4. The hunt is open to youth ages 10-15 at the time of the hunt. To register for the hunt or for more information, call (217) 785-8060.