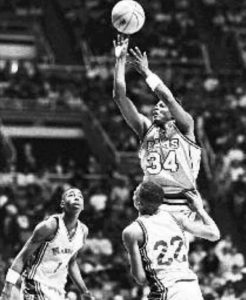 Howard Nathan helped guide Manual to four straight Class 2A basketball titles and later played at DePaul, Louisville-Monroe and the NBA’s Atlanta Hawks. He was paralyzed in 2006 after being struck by a drunk driver.

In 1991, Nathan was a senior at Manual High School when he was named “Mr. Basketball of Illinois” by the Illinois Basketball Coaches Association. Only one player in Illinois is given the award each year, and Nathan was the first athlete in Peoria to earn it.

As a 5-foot-10 guard with the Manual Rams, Nathan averaged 20 points per game, and is considered a key player that launched the team into a historic winning streak, resulting in four straight Class 2A titles from 1994 through 1997.

Howard played ball with the DePaul University Blue Demons, then the Louisiana-Monroe Warhawks before a brief pro basketball stint with the Atlanta Hawks during the 1995-96 season. He appeared in the 1994 documentary, “Hoop Dreams”.

On July 30, 2006, Howard’s vehicle was struck by a drunk driver, rendering him paralyzed from the waist down. Howard remained involved in civic activities and youth activities, and served as the assistant basketball coach, despite the confines of a wheelchair, for Manual High School, known now as Manual Academy.

On July 9, Howard’s heart failed twice, and physicians at OSF St. Francis placed him in a medically-induced coma until he showed signs of recovery, which he did briefly, before his health, again, declined.

At the launch of his career, longtime local sportscaster Jim Mattson reported on Nathan while he played for Manual, and said he was thrilled to cover “the incredibly talented Howard Nathan.”

“I remember Howard as being so strong, so confident, so competitive. But most of all, so cool!,” Mattson posted to Facebook hours after Howard passed away. “His swagger, his fade top hair, his high tops, his dazzling moves followed by a  no-sweat, done-it-before and will-do-it-again reaction … the rest of the USA wanted to be like Mike. In Peoria, EVERYONE wanted to be like Howard.”