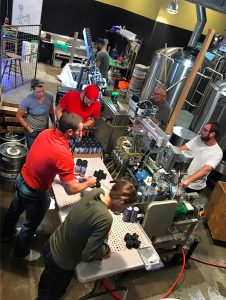 Calling all Hop Heads! Very soon, and for a short time, Peoria Brewing Co. will serve a test batch of beer featuring locally grown hops during its annual “Tappy Hour”.

The brewery hosts the event to encourage the public to sample this year’s test batches. It’s a way to determine which beers they may later label and serve at the brewery. Among this year’s samples is a batch created using Crystal hops from a Lewiston, Ill. farm.

Three years ago, the Kotewa family, dedicated a few acres to hops farming, and named it Hallowed Hops Farm. Since then, the Crystal and Cascade hops they initially planted have matured, and the family has  also introduced a growing number of hops varieties.

“I had a curiosity for alternative crops and it was spurred on by a Farm Bureau event on row cropping, non-standard crops, different crops for specialty markets,” Erik Kotewa said. “I had been in touch with several microbreweries who talked about hops shortages, and wished someone grew hops in Illinois.”

Despite skepticism surrounding hop-friendly climates, Kotewa began a first crop in 2014. Shortly after the first crop of Crystal and Cascade, Kotewa added 7.5 acres and now grows Nugget, Centennial, Chinook and Zeuss varieties. He also is testing a library of 15 other varieties.

Hops grow on “bines”, creating a skyward helix of shoots along a support. The bines are dense, and a single acre can host as many as 1,500 plants. Kotewa said Hallowed Hops Farm will expand this year to 10 acres – around 15,000 plants.

Kotewa’s test batch will be featured, along with others, during the brewery’s “Tappy Hour”. Peoria Brewing Co. brewer, Adam Lawler acquired a pound of Kotewa’s Crystal hops this year, and was impressed with the alpha acid content.

“We usually don’t use that fresh of a hop, we usually use pelletized hops,” Lawler said. “He gave us a pound. We didn’t even use the whole pound. Erik’s hop is high in alpha acids, around 13 percent, that’s unheard of for that type of hop.”

Lawler said the Hallowed Hops batch is “sweet, almost like candy”, but added that following batches may be altered to increase boldness.

“This year we did wet hopping where you take the fresh hop right off the vine and it must be used or dried in 24 hours,” Kotewa said. “We’re looking into building a facility to create pelletized hops, but that’s extremely expensive and will take some time to get going.”

“They went out on a limb for us and its been great,” Kotewa said. “We picked enough for Triptych to make 60 barrels and they’re available for sale now.”

“I’m excited about this,” Lawler said. “He has quite a large farm and a lot of interest from Chicago breweries.”

Peoria Brewing Co. is located off of Pioneer Parkway. at 8012 N. Hale Ave. and is open from 2-10 p.m. weekdays, and until midnight Friday and Saturday.