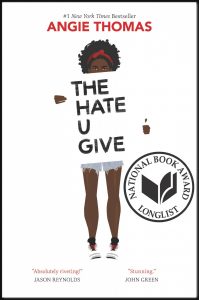 Peoria Reads! has chosen “The Hate U Give” by Angie Thomas as the selection for 2020. The book delves into police shootings, activism and racism.

A record-setting $22,284.49 was raised for the OSF HealthCare Children’s Hospital of Illinois during Illinois Wesleyan University’s annual TitanThon .

TitanThon, whose slogan is “For The Kids,” is a registered student organization (RSO) with a mission to provide monetary and emotional support to the children and families of the OSF Children’s Hospital of Illinois.

TitanThon, which partnered with Greek Life organizations and other RSOs across campus, spent hours each week during the summer and first semester planning the Feb. 1 main event. During the event, which lasted from 4-10 p.m., participants pledged to stand on their feet for the entirety of the evening in honor of Children’s Hospital patients and families.

The event, which is a celebration of the year’s fundraising efforts, also included many activities that encouraged people to donate to the Children’s Hospital.

One of the events included painting rocks to donate to the Children’s Hospital garden. Other events included Zumba, choreographed dances, as well as activities that encouraged students to fundraise.

Most programs conclude with a big event ranging from four to 46 hours in which the participants hear stories from Miracle Families, participate in activities, and fundraise for their local children’s hospital.

The next Annie’s Project is being co-sponsored by University of Illinois Extension, Fulton-Mason-Peoria-Tazewell Unit, and Fulton County Farm Bureau starting in March.

Annie’s Project is designed to help farm women develop their management and decision making skills in the dynamic, complex world of agriculture.

Check-in will begin at 5:30 p.m. with a lite supper being served each evening.

The cost of the program is $50 and is payable by the registration deadline on March 2. If you are an Annie’s Project Alumni and would like a refresher, the cost is $30. Checks should be payable to University of Illinois.

For more information contact, Christine Belless at cbelless@illinois.edu or call 309-547-3711.

If you need a reasonable accommodation to participate in any event listed in this news release, contact your local Extension office.

Illinois Central College strongly encourages all students who plan to enroll in the fall 2020 semester to apply for the large number of available scholarships.

The ICC Educational Foundation awards more than 600 scholarships totaling over $850,000 to students each academic year.

ICC students may apply for the scholarships up until 11:59 p.m. on March 1, using the online application system.

The online application process is simple, and by completing one application, students are automatically considered for every scholarship for which they are eligible.

Go online to view a complete listing of all available ICC scholarships at icc.edu/students/scholarships/.

Questions about scholarships or the application process may be directed to Stephanie Holmes at 309-694-8420.

True crime has experienced a revival in the past five years with so many popular podcasts and Netflix docuseries.

Although humankind’s fascination with crime can be traced back to cave paintings 30,000 years ago, the latest surge in old murder cases, kidnapped children and felonious celebrities has become an all-consuming pastime.

Those attending will learn the socio-historical evolution of true crime fascination, the psychological appeal of gruesome violence and ethical conundrums associated with the genre.

Peoria Reads! has chosen “The Hate U Give” by Angie Thomas as the selection for 2020.

In Thomas’ debut novel, she explores the world of a teenage girl grappling with racism, police brutality and activism after witnessing a white police officer shoot and kill her childhood friend. Thomas not only delves into the Black Lives Matter movement, but also other challenges faced by minorities.

The Peoria Public Library chose this thought-provoking book with the hopes that the entire community will read it and engage in conversations and introspection.  Several events — from film screenings to poverty simulations to a panel discussion — will be hosted in March and early April.

Because of its themes and explicit language, “The Hate U Give” was one of the most challenged books of 2017 and 2018, but the Peoria Reads! Committee selected it for the opportunity to raise awareness on issues difficult to otherwise address.

The Illinois Office of the State Fire Marshall is reminding Illinoisans of the importance of having approved smoke alarms.

By Jan. 1, 2023, all smoke alarms/detectors must have a sealed 10-year battery unless the alarms are hardwired into the home.

When purchasing a smoke alarm for your household, be certain that that the smoke alarm has been approved by a third-party testing organization as some retail outlets may sell non-listed smoke alarms.

OSFM has worked to pass an update to the NFPA 101, Life Safety Code 2015 edition, effective Jan. 1, which contains requirements for smoke alarms/detectors, including that they be listed by a third-party testing organization.