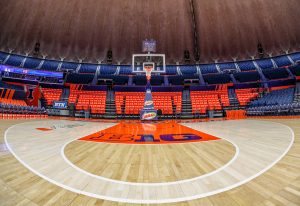 The renovated State Farm Center at the University of Illinois will host the state boys basketball finals starting in 2021. Formerly called Assembly Hall and opened in 1963, the venue hosted boys basketball finals through 1995. It recently underwent a $170 million renovation that turned it into a state-of-the-art facility. (University of Illinois photo)

The boys state high school basketball finals will no longer play in Peoria.

The Illinois High School Association said it will move the four-class state championships back to Champaign-Urbana starting in 2021.

The move, announced after a June 15 IHSA board meeting, ends a 25-year run in Peoria. The final tournaments came to an abrupt end in March when officials called off state finals in the face of the rapidly expanding COVID-19 pandemic even as teams and fans were were arriving at Carver Arena.

“While we are ultimately disappointed that the IHSA Board has chosen to move the boys from Peoria, we ultimately thank them for the opportunity to have hosted 25 storied years in Peoria and to write incredible chapters in the IHSA history books,” said J.D. Dalfonso, President/CEO of the Peoria Area Convention and Visitors Bureau in a statement.

“The tournament experience that we have been able to provide in Peoria for more than two decades comes from this community’s incredible pride and passion to build and execute a nationally acclaimed state basketball tournament.”

The tournaments reportedly had a $4 million economic impact in the region and introduced innovations like a family-friendly March Madness Experience and had strong support in the greater Peoria area. But attendance reportedly had slipped in recent years and the area outside Carver Arena lacked restaurants or other gathering places.

Peoria will continue to host the Chess State Finals but the IHSA’s Scholastic Bowl will move from the Peoria Civic Center to Heartland Community College in Normal for at least the next three years.

“It’s difficult to express how grateful we are to the city of Peoria, the Civic Center, the surrounding communities and the army of volunteers who have so vigorously supported the state tournament for a quarter of a century in Peoria,” said IHSA Executive Director Craig Anderson. “We understand there may be some initial disappointment, but ultimately, we hope they are as proud as we are for overseeing one of the most decorated eras in IHSA basketball with class, grace and innovation.”

Starting in 2021, boys basketball finals will be played at the State Farm Center on the University of Illinois campus. Formerly known as Assembly Hall, the center recently underwent a $170 million renovation.

Illinois hosted the state championships from 1919-95, including the days when it it was a single-class tournament until splitting into two classes in 1971-72. Champaign-Urbana first hosted in 1919 at the Men’s Annex Gym (now Kenney Gym), switched to Huff Hall in 1926 and moved to Assembly Hall when that venue opened in 1963.

The first high school basketball finals were held at the Oak Park YMCA in 1908.

“We are grateful to the IHSA and its leadership for choosing State Farm Center and Champaign-Urbana to host the state finals,” said Josh Whitman, University of Illinois athletic director. “We are humbled by their confidence in our community, which I know will come together to provide the players, families, and fans of the state’s best teams a once-in-a-lifetime experience.”

“We see this as the passing of the torch from Peoria to Champaign-Urbana,” said Anderson. “It is bittersweet because there is incredible passion for high school basketball within these two communities, and both have done so much to elevate the state final experience as hosts. … The timing simply felt right to make a change as the tournament format shifts in 2021.”

The Peoria Civic Center had also sought to retain the boys finals while seeking to add state girls basketball championships.

Bloomington-Normal, girls tourney host since 1992, will keep those finals and continue at Illinois State University’s Redbird Arena. ISU will also continue to be home for girls volleyball championships.

The 2021 finals will feature state tournaments held on a single weekend, running from Thursday through Saturday and crowning four state champs. The girls finals wil run March 4-6, 2021 while the boys will be on March 11-13.