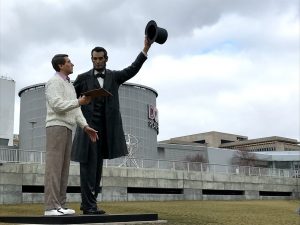 In the 1800s, when Abraham Lincoln practiced law, he would travel by horse and cart, often sleeping outdoors overnight. When Abe left Peoria for Springfield this week, he was to be loaded, by crane, onto a flatbed trailer and stay the night in a Walmart parking lot.

“Return Visit”, the 25-foot tall bronze sculpture of Lincoln interacting with the common, modern man, was moved from Chicago to the Peoria Riverfront Museum in September 2017.

On May 21, the Seward Johnson sculpture was to be removed, then replaced, later that day, with another of the artist’s monumental works, “God Bless America”, a rendition of Grant Wood’s “American Gothic.”

“We’re getting a lot of push-back from people, asking ‘Why are you taking Lincoln away?’

” Cathie Neumiller, Riverfront Museum Vice President of Communications, said. “People have had a lot of fun with the Abraham Lincoln sculpture, and really enjoyed it.”

A Bradley student once digitally erased the “common man” from the sculpture, and replaced him with the Peoria Plaza Tire’s iconic “Vanna Whitewall” statue. When the image was posted to Facebook, Seward Johnson gave the photo a Like.

“Seward Johnson really enjoys interacting with people, and entertaining people,” Neumiller said. “They put minimal coverage on these sculptures when they transport them, and it’s always a spectacle.”

Collectively, the Lincoln sculpture weighs around 19 tons, as does “God Bless America.” In order to remove and replace the display, the museum hired Gingerich Crane of Morton; the only local company with equipment that can manage the task.

When “Return Visit” was installed at the riverfront, workers used adjacent parking lots on Water Street to park the sculpture, then transfer it to the steel-reinforced concrete sculpture pad at the south face of the museum. 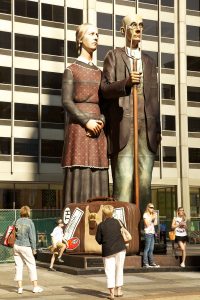 On May 21, Seward Johnson’s bronze sculpture, “God Bless America” was installed at the south face of the Peoria Riverfront Museum, where it will remain on loan by the artist’s foundation until September 2020. (Photo courtesy of Seward Johnson Foundation)

This year, those parking lots are flooded, and Neumiller said it will be a challenge to accommodate the installation. City of Peoria officials are aware of the problem and are cooperating to ensure speedy, trouble-free removal and replacement.

The bronze sculptures are on loan from the Seward Johnson Foundation, as are the artist’s other works, such as “Embracing Peace”, a rendition of the “The Kiss”, the WWII photo of a sailor kissing a woman at the end of the war.

Seward’s sculptures, which vary in size, can be found internationally in museums and private collections, and many of his mammoth works continue to cycle about locations throughout the United States.

Abe and the common man, which arrived in Peoria from Chicago’s Tribune Tower, will be installed at the Abraham Lincoln Presidential Library and Museum, where it will remain until September 2020.

“God Bless America” is expected to stay on in Peoria until that time, as well. Most people believe the farmers depicted in the painting are the artist’s parents.

The woman is Wood’s sister, Nan Wood Graham and the man is their family dentist, Dr. Byron McKeeby.

Neumiller said the stoic folk epitomize Central Illinois and its farming heritage, and the museum is thrilled to have the iconic figures peering at a city which was industrially founded by agriculture.Linc